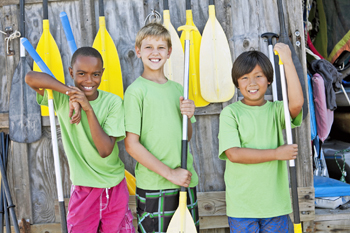 Some of my favorite memories growing up were created during summers spent hundreds of miles from home. Every year, my mom and dad drove me to auditions for summer ballet camps with professional dance companies — Cincinnati Ballet, Ballet Austin, San Francisco Ballet, American Ballet Theatre.

When the last school bell rang for summer dismissal in June, my parents would give me five weeks’ worth of goodnight kisses and bid me farewell at the airport. I spent my breaks in square-rimmed studios with dozens of wannabe ballerinas training under some of the world’s best choreographers.

Summer camps — even those located just a few miles away from home — are a constructive way for children of all ages to discover and nurture their special talents. Many don’t just help kids pass the time on those long summer days. They help them figure out what makes them unique.

So when Washington-area schools break for summer recess, parents may want to consider sending their children to one of the several hundred summer camps offered around town, whether they be mere day camps or weeklong immersions. As an epicenter of politics and history, with its array of prestigious colleges and a colorful arts scene, the nation’s capital has an endless selection of summer camps — from band camps and tennis camps to history camps and even Lego-building camps.

They’re a great opportunity for children to delve into the topics that interest them. Some even inspire careers — mine did. Today, I perform with local D.C. dance companies.

Beyond that though, summer camps are just plain fun and an easy way to make new friends — and a source of countless childhood memories that will last a lifetime.

How to Camp Shop

If you did a Google search for “summer camp” in early April, you would have received more than 48 million search results. The good news is there’s something for everyone — whether your child is 3 years old or 17. But finding the right camp requires some research and months of planning to navigate the labyrinth of options.

The quickest way to narrow down the search is to simply ask your child what makes him or her tick. Most parents already know. Maybe it’s computers, painting, acrobatics or sparkly tutus. There are even camps for baton twirling. Parents should comb through programs to find camps that feature a topic or theme that will naturally interest their kids.

The most rewarding summer camps allow children to hone a specific skill set in addition to enjoying themselves. Some camps focus on academics, others on athletics, and others on specific activities like cooking. Still other camps help kids build more abstract skills like leadership or patience.

Next, a good step is to figure out what kind of camp best fits your child’s independence level: day-long camps, half-day camps, weeklong sleep-away camps or even month-long excursions.

Partial-day camps — typically about two or three hours in length — may be better suited to toddlers or children under 5 years old. For parents who don’t yet feel comfortable leaving their children behind, some camps allow parents to stay and participate in the activities.

Most children can handle full-day camps because the days are often jam-packed with activities that keep them busy and focused. I, for example, can’t recall a single dull moment between ballet, jazz and modern dance classes and the fun weekend activities that had me bustling around the cities where I stayed.

When determining whether or not your child is ready for a sleep-away camp, consider his or her independence level: How do they handle sleepovers or leaving for a week away with the grandparents?

After deciding the length of the camp experience that is right for your child, choose how far you’re willing to travel each day. Kids attending sleep-away camps can be flown across the country to reach their destinations, but those attending day camps need to be shuttled before and after work every day.

Other factors many parents consider: the ratio of counselors to kids, excessive “canteens” and the quality of facilities.

Children should be well supervised and mentored by camp counselors for safety reasons and to ensure a worthwhile experience. There is no magical number for determining how many students should be designated to one camp counselor — it depends on the activity and age of the child. Typically one counselor per 10 to 12 children is fine, but for activities that involve risk, such as archery or swimming, supervision should increase.

Some parents also complain about camp “canteens,” or snack bars that allow children to purchase junk food and souvenirs at any time to raise money for the camps. There’s a time and place for young children to chomp on Snickers and chug Mountain Dew, and it’s definitely not before bed. But some canteens don’t have such restrictions. Parents should inquire about camp canteens to make sure their kids won’t wind up spending hundreds of dollars on unhealthy snacks.

Facilities are often another factor in determining which camp is right for a child. The best way to learn about the buildings and surrounding area is to simply go there and visit. All legitimate camps should allow some sort of visitation by interested parties — if not, scratch that one off the list.

Parents of children who’d rather build atom models with Styrofoam balls than kick around a soccer ball should take advantage of the myriad high-profile colleges in the Washington area, many of which host their own children’s camps or rent their facilities to programs that do. 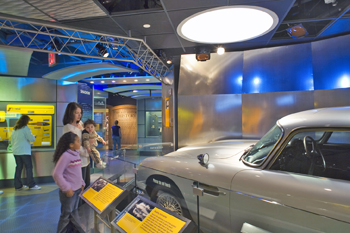 The International Spy Museum offers Spy Camp for kids ages 10 to 13 who dream of becoming the next James Bonds, Jason Bourne or Charlie’s Angel.

American University, for example, is home to iD Tech Camps, a science, tech and engineering company that offers summer computer programs at top U.S. universities such as Stanford, Duke and Yale. Depending on the session they choose, children between the ages of 7 and 18 develop their very own iPhone or Android apps, create movies, build robots, edit digital photos or design websites using the latest cutting-edge technology.

iD — which offers weeklong day camps or two-week stay-away immersions — prides itself on balancing work and play and boasts a 1-to-8 teacher-to-children ratio. The high-tech camp’s prices are, well, pricy, but it may be worth the added costs to find out whether your child is the next Albert Einstein or Mark Zuckerberg. The two-week overnight stay is $3,499, including room and board, while day camps range from $850 to $950 per week.

Locals should also take advantage of the unparalleled reservoir of museums in the area, most of which offer summer camps for children. The Smithsonian, for instance, hosts dozens of weeklong camps for kids in kindergarten up to the ninth grade from June 18 through August 17.

One weeklong session teaches sixth-, seventh- and eighth-graders how to create their own video games, including characters and animation. Another program teaches children about campaigning and running for president, including the art and craft of speechwriting and politics, as well as trips to places where presidents have trod, from the White House to Mount Vernon.

For a very different museum experience, the International Spy Museum offers Spy Camp for kids ages 10 to 13 who dream of becoming the next James Bonds, Jason Bourne or Charlie’s Angel. From 9 a.m. to 3 p.m., “reservists” go on missions throughout the city — on the National Mall, through the Smithsonian museums, to the FBI headquarters — and learn the art of Ninja, interrogation techniques and how to piece together clues to uncover hidden secrets. The camp is $415 per week. 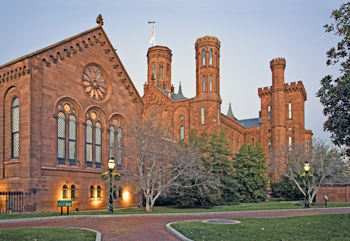 The Smithsonian Institution hosts dozens of weeklong camps for children in kindergarten up to the ninth grade during the summertime.

Area diplomats with children who need to brush up on their language skills might want to check out the Washington International School’s Passport to Summer, which is hosted on the school’s Georgetown campus. The summer camp offers language immersion camps in French, Spanish and Chinese for children ages 3 to 11 and English-language camps for ages 9 to 16.

The language immersion programs are designed for non-native speakers and taught by native speakers. Camp counselors use songs, dance, crafts and games to help children master new words and phrases. Like school, the camps feature recess, lunch and quiet times. But unlike a typical language class, the Washington International School’s courses also instruct youngsters on the customs and culture of their area of study.

The school also offers “specialty” summer programs geared toward developing other skills, such as designing pottery, or generating a tornado in a science experiment, or performing the latest hip hop dance move, for example.

All camps start at 8:45 a.m. and run until 3 p.m. with daily exercise — often swimming for older children. Camps range from $160 for half days to $800 per week, though most average between $300 and $400 per program. And parents can pay an extra fee for transportation or extended childcare hours to accommodate a typical workday.

If your child envisions a future on stage or in front of the camera, a performing arts camp may offer the venue to let them shine.

The Adventure Theatre’s Summer Musical Theatre Camp at the Atlas Performing Arts Center on H Street offers two-week long camps for children ages 6 to 12 with classes and workshops on dancing, singing and acting. Their efforts culminate in an end-of-camp production of either Disney’s “Mulan Jr.” or “Tom Sawyer.” The two-week day camps are $600.

If your child has an ear for pop music rather than classical theater, Joy of Motion, among many other camps, will host a weeklong hip hop dance camp this summer. For $582, students will learn how to break-dance, pop-and-lock and freestyle — and they’ll perform their new moves at the week’s end. 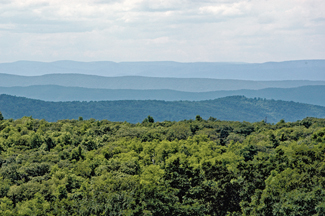 Nature Camp mixes outdoor activities with education about conservation in the heart of the rolling Blue Ridge Mountains in Virginia.

Adventure in the Great Outdoors

With the rolling expanse of the Blue Ridge Mountains, Virginia houses a number of sleep-away camps for those seeking outdoor adventures. One option, simply dubbed Nature Camp, mixes outdoor fun with education about conservation, teaching children how to be good stewards of Earth’s resources while enjoying them at the same time.

Located in Rockbridge County, Va. — about three hours from the District — Nature Camp offers two-week, $750 sessions for youngsters in grades five to 12. The children are split up by age, with a counselor-to-children ratio of 1 to 4 or 5. Boys and girls sleep separately in supervised bunkhouses.

At Nature Camp, kids take two 90-minute classes each day and can choose to “major” in one special area for a total of 15 hours of study. They can “minor” in several other topics as well. Class choices include botany, ecology, entomology, geology, herpetology, ornithology, conservation, astronomy and several others.

Camp-goers also get five to six hours of free time each day, when they can choose to explore the Blue Ridge Mountains on supervised hikes, play in natural water slides, swim in the pools, or participate in sports with their new friends.