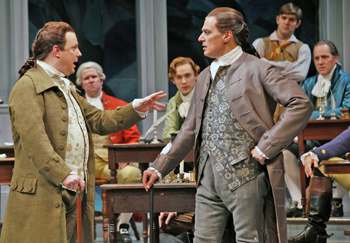 The Ford’s Theatre production of the musical “1776,” directed by Peter Flynn, lets audiences be a fly on the wall in the sweltering pressure-cooker of the Second Continental Congress in Philadelphia, where John Adams, Benjamin Franklin and Thomas Jefferson try to persuade representatives of the 13 colonies to sign the Declaration of Independence.

Those whose memories of history class are less than stellar will be unexpectedly pleased with the Ford’s Theatre’s revival of the 1969 musical “1776.” What might be recalled from grade school as the subject of overkill, the writing and signing of the Declaration of Independence, is infused with fresh life in this production through vibrant music, inspired singing, and delicious details not caught in traditional annals.

By retelling our country’s shaky historical beginnings through a personal outlook, Ford’s Theatre lets its audience be a fly on the wall in the sweltering pressure-cooker of the Second Continental Congress in Philadelphia. That’s where John Adams, Benjamin Franklin and Thomas Jefferson attempt to persuade the 13 colonies to separate from British rule after a string of abuses by King George. But this production finds most of the representatives of those 13 British colonies homesick, disgruntled and bickering, wishing they were home with their wives and families rather than putting up with a growing apathy for the new colonies’ democratic process.

It’s not exactly the pretty picture Americans have formed of their idealized founding fathers — but surely it’s a more entertaining and realistic one.

Instead of the one-dimensional, upstanding and distinguished men that plaster history textbooks, we get to witness a tipsy, testy Stephen Hopkins, the Rhode Island congressman (played delightfully by Floyd King), drinking and pissing his way through the congressional sessions; and a flawed John Adams, played in a larger-than-life performance by Brooks Ashmanskas. Adams is deemed “obnoxious and disliked” by all his cohorts and almost loses the cause for freedom due to his unpopularity. And let’s not forget the licentious Thomas Jefferson, played by the dashing William Diggle, who requires a carnal visit from his wife Martha before he’s inclined to write the famous document.

The play’s authenticity really hits home in the rousing number sung brilliantly by Gregory Maheu, who plays Loyalist Edward Rutledge from South Carolina. The emotional “From Molasses to Rum” blatantly exposes the hypocrisy of the Patriots, specifically Adams and Jefferson, for wanting to keep the “no slaves clause” in the Declaration that proclaimed “all men are created equal.” The “no-slavery” clause was stricken from the final version after Rutledge threatened to vote against adopting the paper if the passage wasn’t removed. His song illustrates just how the northern states’ hands were bloodied from the slave trade and how Jefferson himself was a prominent Virginia slaveholder. This exchange of hostile sentiment not only brings to the surface messy behind-the-scenes deals that have been a part of politics since the infancy of the United States, but also shines a brighter light on the extreme national tensions that led up to the Civil War. 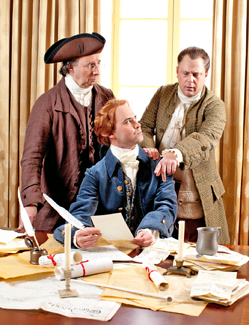 Also bringing the often-comic script back to sobriety are frequent letters sent to the Congress by a downtrodden George Washington fighting in the field, as well as a touching musical number, “Momma, Look Sharp,” sung by the courier about mothers finding their slain sons on the battlefield.

No doubt contributing to the success of this production are Peter Flynn’s adept direction, Tony Cisek’s scenic design, Nancy Schertler’s lighting and Wade Laboissonniere’s costumes. Although Ford’s stage isn’t massive, somehow Cisek’s intricate, step-leveled congressional boardroom manages to simultaneously house 20 congressmen, a secretary, a custodian and a courier. They all move about seamlessly (sometimes in dancing formation), thanks to Flynn’s expert blocking and choreography by Michael Bobbit. The set rarely alters, but Schertler’s clever use of lighting indicates time changes in day and night without missing a beat of the action. Balancing out the aesthetic picture are magnificent 16th-century waistcoats, breeches, stockings, buckled shoes, wigs, coats and walking canes for the men; and ruffled gowns and petticoats for the women.

Although the script is dominated by men, two founding women are featured who stand out in talent and add a welcome diversion from the macho bravado. The devoted Abigail Adams (Kate Fisher) makes several appearances in John Adams’s thoughts and letters; the two also sing beautiful duets, showcasing her flawless soprano. Erin Kruse, as the young and feisty Martha Jefferson, delights with “He Plays the Violin,” confessing to Adams and Jefferson what she loves most about her mate.

This production — the handiwork of writers Sherman Edwards and Peter Stone — is not without its flaws, however. Act II outstays its welcome (the show is almost three hours), with congressman after congressman showcased in song. There’s a bit of overdone campiness, predictable humor and at times, the acting doesn’t match the quality of the singing. But overall, the show is spirited and entertaining, and the fact that it’s at the historic Ford’s Theatre in the nation’s capital makes the fun-poking at this motley crew of congressmen even more ironic.

Although “1776” promises a mostly lighthearted evening, its serious sentiment runs deep — a message implanted in the forefront of the audience’s mind. A scrim at the start of the play poignantly orders, “Join or Die,” while a painted backdrop of Revolutionary soldiers in combat constantly reminds us that U.S. freedom was indeed hard-fought. Finally, a lasting image of the Declaration with all of the equally hard-fought required signatures looms on the final curtain.

Whether you planned to or not, you’re likely to leave the theater more patriotic than when you entered.