Home The Washington Diplomat December 2012 For UAE, It’s Better To Give Than to Receive 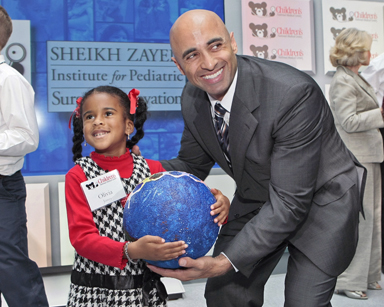 In early October, a Pakistani schoolgirl was shot in the head by the Taliban for publicly supporting girls’ right to education. Since then, people around the world have been following the story of Malala Yousafzai, captivated by her courage and praying for her recovery. Leading the diplomatic response were the governments of Britain and the United Arab Emirates, which coordinated with Pakistani officials to evacuate Yousafzai in an air ambulance provided by the UAE to a hospital in Britain for further treatment.

“Tolerance and respect are important aspects of Emirati society,” said Yousef Al Otaiba, the UAE ambassador in Washington. “And it is important to stand with Malala and others who bravely stand up to extremism.”

Yet this isn’t the first time the UAE — a federation of seven emirates, including Dubai and Abu Dhabi, the latter being the source of most of the country’s oil and gas wealth — has played a major role in international crises. Working quietly behind the scenes, the UAE is one of the world’s largest donors of foreign aid in proportion to its gross national product, according to the Organization for Economic Cooperation and Development.

In recent years, the UAE has made sizable donations to relief efforts following Hurricane Katrina, the tornado that devastated Joplin, Missouri, the Japanese tsunami and nuclear disaster, and the Haitian earthquake. But the government isn’t just in the business of doling out disaster aid. The UAE has also supported local communities throughout the United States, from Boys & Girls Clubs in Los Angeles and Miami to Chicago’s public schools.

Much of this charitable giving is spearheaded and implemented by the UAE Embassy here in Washington, which has lent assistance to numerous local causes, many with a focus on children and health care.

Ambassador of the United Arab Emirates Yousef Al Otaiba receives a gift from a child at the announcement of the UAE’s gift of $150 million to fund the Sheikh Zayed Institute of Pediatric Surgical Innovation at Children’s National Medical Center in Washington, D.C. The donation is among the largest gifts ever given toward pediatric research and care.

In 2009, the government of Abu Dhabi donated $150 million to build the Institute for Pediatric Surgical Innovation at Children’s National Medical Center in D.C. Her Highness Sheikha Fatima bint Mubarak Al Ketbi gave a personal gift toward the building of the new headquarters for the U.S. Institute of Peace. Most recently, the UAE Embassy was among the lead contributors who provided $1.6 million in initial funding to help the nonprofit Fight For Children launch an early education program for at-risk D.C. children.

Elsewhere, the UAE gave a $5 million grant to build the pediatric wing of Joplin’s Mercy Hospital and the hospital’s first neonatal intensive care unit, on top of other donations it made to the Joplin community as it sought to rebuild from a 2011 tornado that killed 161 people and caused billions of dollars in damages.

Many of the UAE’s various community projects are modest in scale but make a big impact on the ground. For instance, Abu Dhabi issued a grant of up to $1 million to buy personal laptops for every student at Joplin High School to create virtual classrooms until the town’s only high school could be rebuilt after the deadly twister.

“I was very moved when I went down to Joplin just prior to high school graduation in May,” said Al Otaiba, noting that he “could see how the kids and community were healing, and the impact that our modest gift had made.”

City Soccer in the Community is a project particularly close to the ambassador’s heart. In partnership with England’s Manchester City Football Club, the UAE Embassy has built soccer fields in L.A., Miami, Chicago and New York, in addition to setting up coaching programs for inner city youth. The ambassador hopes to establish the next soccer program here in D.C. in the spring. A die-hard soccer fan, Al Otaiba has long supported Barcelona’s soccer team but now shares his loyalty with Manchester City Football Club, which is owned by a member of the Abu Dhabi royal family.

“These efforts further understanding and collaboration among nations and help promote social and economic development — both of which are pillars of the UAE’s foreign policy,” Al Otaiba told The Washington Diplomat.

On Dec. 2, 2012, the UAE marked 41 years as a self-governing nation, having transformed from a tribal culture reliant on agriculture and fishing to an affluent, modern society (also see The Washington Diplomat’s UAE cover profile in the March 2010 issue). The strategically located desert country — the size of Maine with roughly 5 million inhabitants — boasts an annual per-capita GDP of nearly $50,000 and is a major oil and natural gas exporter, although the government has worked hard to diversify the economy away from energy reserves. Given its prosperity at home, philanthropy plays a large role in the government’s public diplomacy outreach abroad.

Many of the diverse causes supported by the UAE are linked to personal connections or longstanding partnerships. For example, the UAE-backed Sheikh Zayed Cardiovascular and Critical Care Tower, a state-of-the-art $1.1 billion facility that opened earlier this year in Baltimore, Md., grew out of the nation’s longstanding partnership with Johns Hopkins Medicine, which manages three medical centers in the UAE and is working to improve medical training and the health care system there. On a more personal level, the embassy sponsors the annual Healthy Kidney 10k, a fundraiser for kidney disease research, in honor of the late Sheikh Zayed bin Sultan al Nahyan, the UAE’s first president and a kidney transplant survivor.

Likewise, the UAE shares a personal linkage to Children’s National Medical Center (CNMC). “Hundreds of Emirati children come to CNMC each year to receive specialized care,” the ambassador said. “At home in the UAE, Children’s has worked for years to enhance the pediatric care by setting up an office in Abu Dhabi to assist families overseas and to coordinate conferences and continuing education courses for medical staff.”

And the embassy’s support of the D.C.-based nonprofit Fight For Children stemmed from its connection to the late Joseph E. Robert Jr., the group’s founder and a local philanthropist who joined Al Otaiba in 2009 at the launch of the new pediatric institute at Children’s Medical Center.

“Joe was a visionary and a friend. There is no better way to honor him than to help even more kids get a great start in life,” said Al Otaiba, remarking on the launch of Joe’s Champs, an initiative to provide specially trained teachers to at-risk D.C. pre-school children, a program that will eventually be expanded to more than 30 schools.

The UAE also seeks philanthropic partners “who are thinking big and seeking to implement transformative and innovative projects,” the ambassador said. But not all of the UAEs charitable gifts are motivated by an existing relationship or an innovative purpose; sometimes they give because it “is simply the right thing to do,” Al Otaiba said. 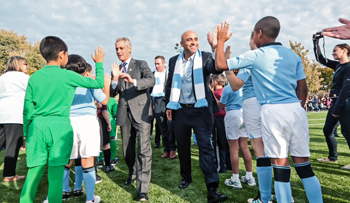 Ambassador of the United Arab Emirates Yousef Al Otaiba, right, and Chicago Mayor Rahm Emanuel are greeted by children at the opening of a new soccer field in Chicago’s Haas Park as part of the UAE Embassy’s City Soccer in the Community Initiative.

“The UAE has a long history of philanthropy that is deeply engrained in its culture,” he explained. “Charity is also an important element of Islam, instilled further by our families, and reinforced deeply by the leadership of the UAE.”

However altruistic the motive, public diplomacy is ultimately a practical tool for shaping public perception to influence political realities. In managing its image abroad, the UAE is aware that, unfairly or not, attitudes toward the country, where Sunni Muslims are the majority, are shaped by perceptions of the Middle East and the region’s wealthy Arab monarchies.

As the ambassador put it, “We are an open, tolerant and progressive country in a difficult neighborhood. The UAE’s philanthropy in the U.S. helps reinforce this story. It shows America and the world who we really are.”

For instance, the U.S. tour of the UAE women’s soccer team speaks to the country’s reputation as a leader in women’s rights in the Arab world.

As ambassador, Al Otaiba says his most important job “is to make sure that Americans have a correct picture of the UAE.”

The young, media-savvy envoy had his work cut out for him when he assumed his post in 2008. Two years prior, the American public, fueled by post-9/11 suspicion of the Mideast, rallied behind congressional leaders who raised national security concerns over the sale of port management authority in six major U.S. seaports to Dubai Ports World, a UAE-based company. The Ports World controversy exposed a fissure in UAE-U.S. relations, with both Democrats and Republicans at the time warning that the deal could make the United States more vulnerable to terrorism.

But diplomatic relationships, like romantic ones, often survive trying times with effort and commitment. The ambassador called the Ports World incident an “unfortunate misunderstanding.”

Navigating such a large and complex democracy like the United States, Al Otaiba observed, is no easy task, especially for smaller nations. “One of the great challenges,” he said, “is the sheer size and scope of the U.S. government and all the different groups and players that influence policy here.”

But in more instances than not, the UAE-U.S. relationship is a relatively smooth one. “I believe that the UAE is among America’s closest allies in the region because the relationship stands on three strong pillars: mutual security interests for peace and stability in the Gulf; deep and expanding commercial and trade ties; and enduring and familiar cultural links,” Al Otaiba said.

Since its was established in 1974, the UAE Embassy in D.C. has helped to further strengthen that relationship. “Our efforts have included conventional efforts like delegation visits and speeches, but what has really connected with Americans have been original programs like the tour of the UAE women’s soccer team to the U.S., the opening of the [New York University] Abu Dhabi campus, the launch of new air routes, and our philanthropic projects like those in Joplin, Missouri, and at Children’s Hospital in Washington,” the ambassador explained.