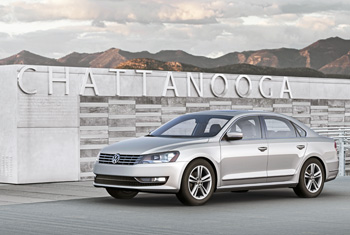 Despite longstanding talk of the decline in U.S. manufacturing, plenty of foreign automotive firms have been setting up plants throughout the United States, which offers a number of competitive advantages, according to Jonathan Browning, president and chief executive officer of the Volkswagen Group of America who spoke at the Council of Foreign Relations in Washington on May 13.

Addressing a crowd of around 60 people on the subject of “American revival,” Browning explained the strategy behind Volkswagen’s decision to build a new, soon-to-be-opened, billion-dollar plant in Chattanooga, Tennessee, that is set to churn out 150,000 vehicles annually.

Volkswagen joins a parade of other foreign car companies, including Toyota, Hyundai, Nissan and Mercedes-Benz, that over the past few decades have set up U.S. “transplants,” as these foreign-owned facilities are known in the industry.

A 2012 Passat stands outside of Volkswagen’s new billion-dollar plant in Chattanooga, Tennessee, where the German automaker joins a parade of other foreign car companies such as Toyota and Mercedes-Benz that have set up manufacturing plants in the United States.

The growth in foreign automotive manufacturing parallels a more recent upsurge in the U.S. manufacturing industry in general, with the nation’s factories having added 250,000 jobs since the beginning of last year — making up about 13 percent of what was shed during the last recession and, more significantly, marking the first sustained increase in manufacturing employment since 1997, according to a recent report in the Washington Post.

Similarly, U.S. car production is experiencing an uptick, part of broader pattern of foreign transportation transplants finding a lucrative base on American soil. In the process, this is challenging long-held assumptions about U.S. manufacturing and changing the face of America’s auto industry.

Why Build Cars in the U.S.?

At first glance, moves to set up new vehicle plants in the United States, given the narrative of high labor prices and a saturated market, seem out of step with history.

Browning explained Volkswagen’s decision as part of a long-term strategy at VW to aggressively increase its presence in the United States. “We identified the U.S. as one of our under-performing markets. Because if you look at the VW Group on a global basis, we have a market share north of 10 percent, whereas … in the U.S. our market share is around 3 percent,” he said.

The U.S. market, he pointed out, is still expanding, offering a lucrative consumer pool. And while in the past, the “buy American” movement may have marginalized European and Asian carmakers, today attitudes among U.S. consumers are considerably more favorable.

According to John Heitmann, a history professor at the University of Dayton and author of the book “The Automobile and American Life,” it is no longer such a disadvantage to be a foreign brand in the U.S. market, and may even be considered a badge of pride. “Years ago, a decade or so, the ‘buy American’ thing was a concern, but I think in the last decade the industry has become so global in terms of supplies and branding,” he said. “If anything, it ought to bring some advantage to be a German manufacturing brand in this country, associated with quality, style and good handling.”

The shift in attitude bodes well for Browning’s assertion that he wants the Volkswagen brand to mean “German engineering, made in America.” The company, he stressed, “will remain first and foremost a German company, and the soul of the brand will remain exactly what it is.”

Having a plant in the United States, Browning argues, will give the company an invaluable vantage point from which to monitor American trends and developments in what he considers one of the most transparent markets in the world. “It is much more than just an economic proposition. And I think it is sometimes underestimated what it means to have a manufacturing presence in a market as opposed to a, lets call it, just a sales and distribution footprint,” he said.

“When you have a plant, that means you bring not only product engineers, manufacturing engineers, you bring purchasing teams, you bring quality teams, so the whole organization is engaged with the market … to understand how that plant operates, you have to understand the environment, the market that it’s addressing, and so the degree of engagement with a market is exponentially larger when you’ve got a manufacturing presence there as well.”

Browning also repeatedly stressed the importance of the plant for maintaining the flexibility needed to adapt to local markets, as well as the scale needed to be an international player. Consumers are different in different places. So while in Western Europe a customer might be happy to specify the type of car they want and wait weeks for it to be made and shipped to them, U.S. consumers are less patient, preferring to buy a car, jump in it, and drive home.

While Browning may have brushed economic considerations aside in his discussion, there is little doubt that financial incentives and calculations have played a large role not only in the growth of transplants in the United States, but also in their locations within the country. Rather than setting up in the traditional manufacturing states of the Rust Belt — like Michigan and Ohio — automotive manufacturers are flocking to the Southeast, with its vast pools of trained but cheap workers.

According to Harley Shaiken, a professor at the University of California-Berkeley who specializes in labor and the global economy, “four factors have tended to attract foreign manufacturers to the South: a growing market, low wages, generous state incentives, and low union density.”

U.S. states have also actively courted foreign automakers for years (see “Local Governments Get Personal to Attract International Dollars” in the August 2007 issue of The Washington Diplomat). State incentives, for instance, have been on the rise: Mississippi reportedly gave Toyota and Nissan $296 million and $363 million, respectively, to build plants there. Georgia enticed Kia with a $419.4 million incentive package, and Tennessee offered Volkswagen $577.4 million to seal the deal.

Browning also admitted that the “attitude” of communities in the South also played a significant role. “In terms of looking at the future employee base, and adopting the working practices, the manufacturing processes, the manufacturing lets say culture that we are looking for, that was an important consideration of what we are trying to achieve,” he said.

With its “right-to-work” legislation, which bars unions from making union-membership a condition of employment at a company, the South offers a more flexible and affordable workforce.

The new jobs are a welcome boost to the battered southern economies, which have been hit by surges of unemployment in recent years. According to the U.S. Bureau of Labor Statistics, the Tennessee unemployment rate jumped from 4.2 percent in April 2007 to 10.2 percent in January 2011.

But some academics question whether the positive impact will be as far-reaching as workers and state officials hope. They argue that while unionized auto industry workers once provided the backbone of the middle class, these new non-unionized autoworkers will not necessarily benefit from the same status and job security.

Shaiken worries that “a key part of these gains are squandered when the attraction becomes low wages and low union density. The flip side of low wages is low purchasing power. This may obtain short-term corporate success at the expense of the long-term future of the middle class. And, the right of workers to freely decide if they want a union is both the law and a vital part of a democratic society.”

That’s why the United Auto Workers (UAW) union has made it one of its goals for 2011 to unionize transplants in the South, committing millions of dollars to the campaign. But scholars and industry experts doubt it will manage to convince workers they will be better off in a union, for a number of reasons.

The UAW itself claims that “the biggest challenge to organizing workers at foreign-owned car plants is intense employer opposition to unionization” and accuses the foreign car companies of harassing and intimidating workers who attempt to unionize. The group is currently attempting to convince several automakers to sign onto a set of principles, which they believe would ensure fair union elections.

But others claim it is also a question of southern culture. According to Heitmann, “from Kentucky to Tennessee down, you have very independent folks who tend not to think of unions.”

Also, as the Christian Science Monitor has reported, while wages are higher for union workers — $36.34 as opposed to $25.65 per hour — the precarious position of the Big Three auto companies in the North (General Motors, Ford and Chrysler) during the recession has left many southern workers wary of pressing too hard for more compensation. The threat of unionization has also led some plants to preemptively boost wages.

Despite the narrative of extortionate labor costs in the United States versus countries such as China, Browning himself suggested that labor’s contribution to the cost of a car is “not as much as you might think,” saying it was neither a majority nor an insignificant minority of the car’s total value, though he declined to break down company figures.

Browning does not doubt that China will be the biggest driver of growth when it comes to the proliferation of auto manufacturers in the coming years. Yet he believes America will retain its auto appeal thanks to a variety of factors — the low wages (relative to Europe), opportunity to better understand the U.S. market, still the world’s largest economy by far, as well as the ability to operate without tariffs within the NAFTA region and to shorten the length of supply chains — all of which is likely to propel foreign carmakers to follow Volkswagen’s quest to, as Browning put it, “get its green card.”

Lois Kapila is a freelance writer in Washington, D.C.