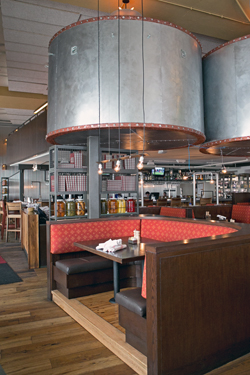 Founding Farmers in Montgomery County, Md., emphasizes classic comfort foods built entirely from scratch in an airy, 8,100-square-foot space that evokes the feeling of a barn.

Back in 2011, the new Potomac Park development project just off Route 270 in Montgomery County, Md., became the suburban proving ground for a successful downtown D.C. concept restaurant that had been redefining high-volume dining since it opened in 2008.

Founding Farmers, the inspiration of the Vucurevich Simons Advisory Group, tapped into the growing fascination with local and seasonal ingredients and other eco-friendly practices that were increasingly driving high-end boutique restaurants in the area. Pairing sustainable sourcing with a focus on the farm and a down-home approach to cooking, Founding Farmers emphasizes classic comfort foods built entirely from scratch. While the idea was not new, the fact that it was done on a large scale and at a price point that made it widely accessible was. The success of its second location in a sprawling suburban complex overlooking the highway confirms the durability and transportability of the concept.

Befitting the suburbia way of life, everything about MoCo Founding Farmers is big: big concept, big space, big food. The 8,100-square-foot, two-story spot was designed by the notable D.C. architecture and design firm of Core to echo but not mirror the downtown location. The team created an airy space that evokes the feeling of a barn, right down to the little mouse hole on the stairway (complete with the mouse).

In planning the layout, the development team wanted to expand the sustainability ethos far beyond the food. The restaurant achieved LEED (Leadership in Energy and Environmental Design) certification and features an impressive array of reclaimed and recycled materials — the bar was built with planks salvaged from shoe shipping crates, and wood from old barns is used throughout the space. It also incorporates energy-efficient lighting heating, and cooling; efficient plumbing; and low-fume paints. The downtown location was the first restaurant in the country to be granted LEED gold certification, and the Montgomery County branch has received the silver designation.

All of this is readily transparent to diners. What they experience is a comfortable space, bright with wood, glass and metal; interesting fabrics; appealing decorative flourishes, including a painted mosaic mural that resembles an aerial view of a big farm with fields planted in different crops; and lots of noise. One of the downsides of a popular restaurant catering to all ages is increasing volume as the evening wears on during crowded nights (which most are at the MoCo location). 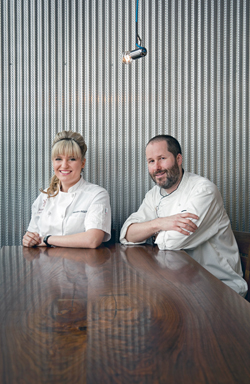 As with everything else at Founding Farmers, the menu is big, and so are the portions. Executive chef Joe Goetze, a veteran of the high-volume restaurant industry, highlights ingredients that (whenever possible) can be obtained from local farmers and producers. His approach is based on the principle that you should always be able get a good meal away from home. And good here is synonymous with the kinds of food you might eat at home, only more so. Classics like pot roast, meatloaf, fried chicken, steaks, burgers, hot dogs and macaroni and cheese abound on the menu, making it suitable for all ages and particularly family friendly.

But the menu is not limited to simple fare, although in their preparation, even these humble dishes are elevated far above the mundane; a touch of cinnamon in the pot roast, for instance, gives it a whole new dimension. Pastas such as the black pepper gnocchi, prepared in an amaretto cream sauce with crumbled sausage, are as good as any you might experience in a sophisticated Italian restaurant, while the fresh seafood done in several different signature preparations rivals many of the top local fish houses. The ciabatta-based farm breads are a collection of intriguing, open-faced sandwich-type dishes (that can be grilled to order) with some truly fascinating combinations, such as prosciutto, fig and mascarpone; brie, onion jam and sliced apples; and our favorite, the herb goat cheese and cured salmon.

The desserts at Founding Farmers are just what you might guess: rich, sweet and plenty to go around. Some of the dishes are designed to be shared, such as the chocolate mousse for two, served in a deep glass mixing bowl topped with chocolate hazelnut crunch, caramel sauce and whipped cream. Others might as well be. The cake slices are huge — the Farmer Ellen’s Carrot Cake is so dense one slice easily serves four. Even the beignets are oversize. Served with a raspberry coulis, semi-sweet chocolate sauce and caramel sauce, the Uncle Buck’s Beignets are less dense than typical versions served in New Orleans. All of the desserts are made in the open dessert studio on the first floor so you can brush up on icing techniques while you wait.

Cocktails drinkers may want to make a separate trip to Founding Farmers just to sample the extensive and inventive drink menu. The trip alone might be worth it to try the Potomac Park Swizzle, a true giant of a drink made with Tito’s Handmade Vodka, Kalani Coconut, passion fruit, lime juice, house-made falernum, bitters, lots of ice and a crown of fresh mint sprigs. Concoctions like this won chief mixologist and beverage director Jon Arroyo a RAMMY award for best beverage/mixology program from the Restaurant Association of Metropolitan Washington in 2011. 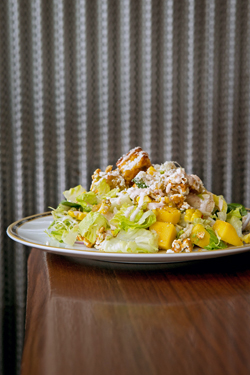 The local farm-to-table concept also carries over into the beverage program, only in this case it’s by way of the still. Founding Farmers has collaborated with Copper Fox Distillery in Sperryville, Va., to develop its own brands: Founding Farmers Rye and the new Farm Gin, which you can sample in one of the excellent cocktails or on their own. If beer is your pleasure, there are rotating selections from small local and regional craft brewers as well as a sampling of imports. On the wine list, all choices on the international collection by the glass are biodynamic, sustainable or organic.

Implementing the farm-to-table philosophy in such a high-volume setting and across all aspects of the restaurant is a significant challenge, but one which the team has risen to admirably. If a visit to Founding Farmers sometimes feels a bit like a trip to the Cheesecake Factory of the slow-food movement, it might well be because some of the concept developers started out there. But with their sincere commitment to sustainability and environmental protection, that tiny taint can be forgiven.

Perhaps the most compelling argument for Founding Farmers as an advocate for the small farmer is not just the fact that it turns to these farmers for its ingredients, but also that it’s actually owned by farmers. One of the principle partners in the restaurants is the North Dakota Farmers Union, a 40,000-strong membership organization made of family farmers. It is somewhat ironic, though, that MoCo Founding Farmers was built in a pricey development project on land that not too long ago was productive farmland.

But farmland in booming Montgomery County, one of the region’s wealthiest suburbs, is no longer easy to come by. Luxury condos and mixed-use communities have sprouted in its place. But traces of the land can still be found at Founding Farmers, an oasis of ambitious yet approachable cooking that’s made a home for itself in the heart of both suburbia and urban D.C.