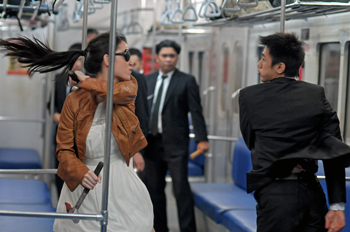 “The Raid 2” is an action-filled ride about a stoic rookie on the Jakarta police force who tries to take down a major crime syndicate.

At the 2014 South by Southwest (SXSW) Film Festival, the Indonesian action flick “The Raid 2” arrived with as much fanfare as any film selection, based on the excellent reputation of the original “The Raid” as well as the loud buzz from the world premiere of “The Raid 2” at Sundance that dazzled audiences. A packed house at the Paramount Theatre in Austin eagerly waited for SXSW’s single screening of “The Raid 2,” a fight-filled ride about an undercover Jakarta cop who tries to bring down a major crime syndicate.

Was it worth the wait? Yes, “The Raid 2” fulfills all the hype. Well, all is an extreme word, but you get the idea. The film’s innovative martial arts scenes are so well choreographed that they rise to the category of dance. I left the theater feeling like a million bucks and quite energized, better than after drinking Red Bull. The film’s lightning-speed action moves so quickly that engaging the brain to keep up acts as a premium mental workout and attention booster. The film’s 148 minutes flies by in the blink of an eye.

As “The Raid 2” opens, police officer Rama (Uwais), a stoic rookie on the Jakarta police force, has finally defeated an entire building full of gangbangers in hand-to-hand combat, which he believes will finally open the door for his return to his regular life. Alas, his commanding officer informs Rama that he’s now on the radar of higher-ranking mobsters. To protect himself and his family, he has no choice but to go undercover in prison, acting as Yuda, a nobody whose only significance is his exceptional ability to fight as a thug. In actuality, he is a plant to infiltrate a powerful organized crime family by befriending prodigal son Ucok (Arifin Putra), precipitating a strategy to take down all the big fish in a long game.

Fans of “The Raid” series will be happy to hear that “The Raid 3” is in the works, picking up where “The Raid 2” left off. 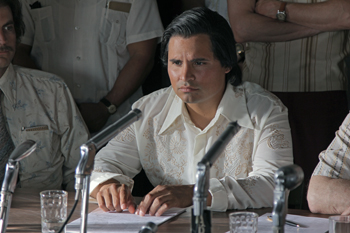 Michael Peña stars in “Cesar Chavez” as the labor and civil rights activist who co-founded the National Farm Workers Association.

Director of photography Enrique Chediak’s glowing, hand-held cinematography was shot on location in northern Mexico, which stands in suitably for the sun-drenched dust bowl of the expansive California Central Valley. With steady pacing, “Cesar Chavez” straightforwardly outlines Chavez’s professional struggles in the 1960s to organize farm workers while maintaining his commitment to nonviolent change.

Unfortunately, in many critical ways, helmer Luna does not quite dodge the sophomore slump with “Cesar Chavez.” Luna plays it too safe with such weighty material, failing to fully convey the power of Chavez’s civil disobedience. Under Luna’s conservative direction, Chavez’s nascent movement never quite comes to life. Sophisticated filmgoers may walk out of “Cesar Chavez” with a nagging aftertaste, as if they have just seen a movie of the week, even if it is better than your average made-for-television biography. It falls into the category of films about important subject matter that viewers are supposed to love en masse but may merely respect and acknowledge.

The film does benefit from the heartfelt performances by its ensemble cast, led by Peña’s sincere portrayal of the eponymous lead role; Dawson’s powerful turn as Dolores Huerta, Chavez’s co-founder of the United Farm Workers; Ferrara as Chavez’s outspoken wife Helen; and the always distinctive American icon John Malkovich as a stubborn grape grower who is Chavez’s primary nemesis. Yet none of the characters seems quite authentic, perhaps because they are lacking in full character development.

The story is built from a serviceable but frequently awkward screenplay written by Keir Pearson (“Hotel Rwanda”) and Timothy J. Sexton (“Children of Men”). The anecdotes about Chavez’s personal life, such as his estrangement from his son who feels neglected while his father is crusading, often seem clumsy at best. Like Chavez’s son, the audience understands intellectually what his father is fighting for, but its importance does not resonate with us emotionally. 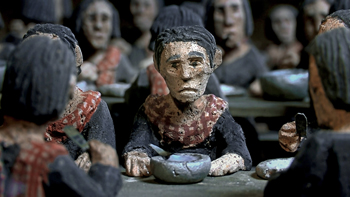 Scores of intricate, hand-carved clay figurines represent people missing from the memory of Cambodian director Rithy Panh, whose film “The Missing Picture” recounts his experiences during the genocidal reign of the Khmer Rouge.

For some two and a half decades, Rithy Panh, Cambodia’s leading filmmaker who was trained in France as a refugee, has created critically respected but little-seen historical films. The collection deals with the legacy of the Khmer Rouge’s brutal reign of terror, led by dictator Pol Pot, over the people of Cambodia from 1975 to 1979. Director-writer Panh’s latest film, “The Missing Picture,” is his first that tells his individual story, based on “The Elimination,” his 2012 autobiography. No doubt, Panh’s tale is mostly comprised of very dark moments, but they are somewhat balanced by lighter recollections of happier times before the Khmer Rouge.

In 1975, when Panh was 13, the Khmer Rouge began to implement its horrific version of a communist state. He recalls his friends and family as well as the trauma they subsequently endured. He, his family and millions of other urban residents were mass relocated by force to rural labor camps. Except for a spoon, personal possessions were eliminated and banned. All clothes were dyed black to excise color. Even names were forbidden (Pol Pot was known as “Brother No. 1”). Everybody starved; many dying from malnutrition. Others were tortured for confessions and/or executed. The result was genocide.

“The Missing Picture” proves to be a more than deserving addition to Panh’s body of work and may become his most commercially successful movie yet. In this case, however, the definition of commercial success is still negligible by Hollywood standards and does not imply big box-office returns. But “The Missing Picture” is enjoying a limited U.S. theatrical release by Strand, a small but highly regarded specialty distributor with a lengthy tenure in the indie film business.

The sidebar “Trust No One: Espionage and Thrillers” features “11.6” (France); “Act Zero” (India); “Cold Eyes” (South Korea); “From Tehran to Heaven” (Iran/Germany); and “The Keeper of Loss Causes” (Denmark).

The “Meet the Filmmaker: Satoshi Miki” retrospective includes filmmaker Miki in person at all programs: “It’s Me, It’s Me” (Fri., April 11, 7 p.m.) and “Adrift in Tokyo” with actress Eri Fuse (Sun., April 13, 2 p.m.). At the pre-film talk “Kiyochika: Master of the Night” (Sun., April 13, 12 p.m.), Miki and Jim Ulak, curator of the exhibit “Kiyochika: Master of the Night,” compare the similarities of the view of Tokyo in Miki’s film “Adrift in Tokyo” with that of Kiyochika’s art some 150 years ago.

The program “Meet the Filmmaker: ‘A Touch of Sin'” (Sat., April 26, 2 p.m.) presents a screening followed by discussion with director Jia Zhang-ke and actress Zhao Tao.

The film program “Shorts-Courts-Kurz: An Afternoon of New International Short Films” (Sat., April 26, 2 p.m.) boasts two one-hour screenings of selections from French and German short film festivals. In between screenings, a call with festival directors will be moderated by independent producer William Gilcher.