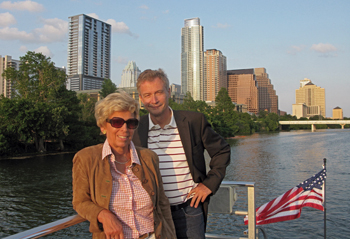 “Germany is not just Bavaria,” said Marliese Heimann-Ammon, wife of German Ambassador Peter Ammon, with just a wisp of hometown pride. “Cologne is my home,” she said, fondly adding, “It has the name, the city of the heart.”

It also has plenty of history. Cologne, Germany’s fourth-largest city, dates back 2,000 years to the Roman Empire. The University of Cologne is one of the oldest and largest in Europe. The city holds another unique place in history: The name for “eau de cologne,” a less concentrated perfume for daily use, originated there.

Marliese Heimann-Ammon is pictured with her husband, German Ambassador Peter Ammon during a trip to Austin, Texas, as part of the State Department’s “Experience America” program.

Located on both sides of the picturesque Rhine River, the city was bombed and almost totally destroyed during World War II. The rebuilding worked to preserve Cologne’s medieval gems while bringing it into the 21st century. Today, the city known to Germans as Köln has become a hub of arts and culture, with many museums and galleries, two symphony orchestras, 11 churches and a cathedral that’s been designated a UNESCO World Heritage site.

Since coming to Washington in 2011, Heimann-Ammon has showcased several artists at the German Residence while adding German and American paintings and sculptures to the sleek, modern residence on Foxhall Road to give it more warmth and softness. “I’m always on the lookout for new artists,” she told us.

It’s part of her desire to give Americans a multifaceted picture of her dynamic homeland.

“Most Americans know a lot about Germany and have a positive view … only a few haven’t taken note of the changes since World War II,” she said. “Germany today is very tolerant and diverse. We are open to foreigners and have a successful integration of people from all over the world. When the Berlin Wall fell in 1989, we took in a great number of immigrants from Eastern Europe, many of whom were Jewish. And today we have a very strong Jewish community.”

And while Germany is known as the no-nonsense economic engine of Europe, Heimann-Ammon says it also has a lighthearted side. “People in Cologne have a good balance in their lives. They like to have fun and they are serious about their work.”

In fact, that combination of fun and work lit the spark between Heimann-Ammon and her husband.

“I was 24 when I left Cologne to teach in a secondary school in Berlin. That’s where I met my husband. He was an assistant professor at Berlin’s Free University,” she recalled. “We met in a disco and he asked if I would like to go sailing with him the next day. The boat capsized and we nearly drowned. That was our first date! This and our shared interest in traveling bound us together. That was 37 years ago.”

They were married in 1979 and moved to London the following year. Subsequent postings took them to Senegal, India and France.

“Following the tradition of those days, I had to give up my own career,” Heimann-Ammon explained. “I am a late mother,” she added. “When my husband and I were posted to Africa, we had already been married for several years but could not have children. We traveled extensively in Africa during that time and had many incredible experiences.”

“For example, on a train ride from Dakar to Bamako in Mali, I shared a compartment for 40 hours with an African lady from the magic town of Timbuktu. She pitied me for not having children at my then age of 36 and tried to give me all kinds of advice. Two weeks later — on my way back to Dakar — she sought me out at the airport in Bamako only to tell me that I would have two children in the next few years. Six months later I was pregnant and two months after Ariane was born, I was pregnant again. Then of course my life changed. I said goodbye to adventurous travel and we returned to Germany where our two daughters were born.”

Today, 27-year-old Ariane is a veterinarian in Cologne and Christina, 26, is an economist in London.

“My daughters and I are very close. We did everything together when they were growing up,” Heimann-Ammon told us.

In 1989, the whole family moved to India where her husband was the press spokesman of the German Embassy in New Delhi. From 1991 to 1999, they returned to Germany, where Ammon was head of policy planning and speechwriter to the German president. Following that, they moved to Washington, D.C., for the first time. While the ambassador served as the embassy’s economic minister, their preteen-age girls attended the German School in Potomac, Md. Then came a stint in France, where Ammon was the ambassador from 2007 to 2008. “We lived in the famous Palais de Beauharnais, Germany’s residence in Paris,” Heimann-Ammon noted.

When Ammon became state secretary at the German Foreign Office, his wife had new duties as well. “I had to perform protocol tasks such as accompanying the German president and his wife on their official travels,” said Heimann-Ammon, who also organized events for the diplomatic corps.

In August 2011, they moved to D.C. for the second time. “The girls were young when we were here before so I didn’t get to know a lot of other people. I was busy taking them to after-school activities like horseback riding and piano lessons. This time, I have much more time to myself.”

So Heimann-Ammon has joined a panoply of different groups. “I enjoy attending the Eleanor Roosevelt Club’s lectures at CSIS,” she said, referring to the Center for Security and International Studies. “I also belong to International Club #1, the McLean Foreign Policy Club, and I especially like the monthly lectures held by the National Museum of Women in the Arts,” said Heimann-Ammon, who also belongs to a French conversation group that meets twice a month. 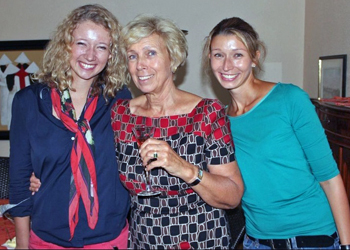 Marliese Heimann-Ammon with her daughters Ariane and Christina.

Another group of personal friends is called the “lobster girls.” “When we first arrived, I walked down to Jetties, the sandwich shop at the bottom of the hill. I met a woman there and we began talking. She offered to introduce me to Washington,” Heimann-Ammon explained. “Right away, she invited me to her home when she didn’t even know who I was! This is what I love about Americans — people are so open and friendly. Through her, I met other women who all decided that I had to go with them to get lobster rolls in Virginia. Ever since then I have called us the lobster girls.”

She also enjoys local adventures with her husband, including hiking the 4.7-mile Billy Goat Trail along the C&O Canal. When Ariane and Christina visited in the fall of 2012, Heimann-Ammon and her daughters spent the night along the canal’s refurbished Lockhouse #10, which is open to overnight visitors who want an authentic, rustic experience that evokes the canal’s heyday.

“It was built in the 1930s. It had antique furniture and the beds were uncomfortable. It was like staying in a youth hostel, but we loved it,” Heimann-Ammon said. “Just before it got dark, the deer came right up to the house. I’ve recommended it to lots of people. Being there was like stepping back in time.”

For a more leisurely atmosphere, she and her husband have bought a condo in Hilton Head, S.C. “We went there last March and loved it. They have a bike path along the beach.”

Their passion for traveling has also taken them on various “Experience America” trips, a program sponsored by the State Department’s Protocol Office that takes ambassadors and their spouses to cities outside the Beltway. They have enjoyed going to Los Angeles, New Orleans, Arkansas, and Texas; Miami is next. On their own, they went to Montana as guests of Sen. Max Baucus (D-Mont.), who was just recently named U.S. ambassador to China (see story).

As much as she enjoys the traveling aspect of diplomacy, Heimann-Ammon said one part she’s not fond of is “a lack of privacy in the residence, a reminder that this is not your own home.”

But that doesn’t mean she hasn’t made the residence a welcoming haven for Americans as she strives to highlight German culture, including its more contemporary side. Recently, she hosted a fashion show for Johnny Talbot of Nashville, Tenn., and Adrian Runhof of Mainz, Germany. Together, they make up the intriguing design duo behind the label Talbot Runhof (also see “Fashion Diplomacy Makes Statement at Local Embassies” in the January 2014 online edition of the Diplomatic Pouch).

The Ammons hosted also a fashion show for Talbot Runhof at their residence in Paris during that city’s fashion week, and they welcomed the pair to D.C. during their recent U.S. visit. The event was sophisticated yet laidback, mirroring the approachable style of this diplomatic couple.

Heimann-Ammon observed that Washingtonians dress casually yet are still stylish. “What I also love about America is that you can start a new career at any age,” she said. Johnny Talbot, for instance, was an electrical engineer who worked at the Pentagon and Radio Free Europe before becoming a fashion designer. She also cited artist Richard Binder, who was an oncologist for 40 years before becoming a sculptor and who has several pieces currently displayed at the residence, where Heimann-Ammon’s own brand of German hospitality is on full display as well.

“My job is to make every guest who comes to the residence feel at home,” she told us. “We are here to showcase the new Germany.”