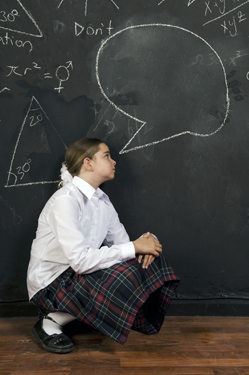 My oldest daughter, now 8, walked early, talked early, and read her first words when she was 4. She’s a bright and verbal little girl, but as she went from kindergarten into first grade, it became obvious that she was struggling with her schoolwork.

Reading even a page of a simple book became a battle. For a time at the beginning of second grade, she complained of difficulty seeing small letters so convincingly that we were sure she needed glasses. (A pediatric ophthalmologist soon proved otherwise.) She’d constantly lose her place in a book because she was trying to look ahead to see how many more pages she had to read. “A whoooole page?” she’d moan. Doing spelling practice, she’d misspell words that were right in front of her on the spelling list.

Then one day her second-grade teacher took me aside at a school function. She didn’t want to wait for parent-teacher conferences to talk to me. With a lot of extra help, our daughter was at grade level in reading but was falling behind in math. “I think your daughter may have attention deficit disorder,” she suggested.

When you think of a child with attention deficit disorder, you probably picture a hyperactive little boy who can’t sit still in class, gets into fights, and runs around the room instead of doing his homework. And it’s true that boys are nearly three times more likely than girls (13.2 percent vs. 5.6 percent) to have ever been diagnosed with attention deficit disorder, according to the U.S. Centers for Disease Control and Prevention.

But that may not reflect what’s really going on with our kids. Girls may be much less likely to be diagnosed with attention deficit disorder because of the kind of disorder many of them have.

There are three commonly identified types of attention deficit disorder: hyperactive type, inattentive type, and combined type. The hyperactive type is the one that probably comes to mind when you think of ADHD (attention deficit hyperactivity disorder): fidgeting, squirming, getting up often when seated, talking too much or out of turn, interrupting, having trouble playing quietly, and running or playing at inappropriate times.

But girls are more than twice as likely as boys to have the “inattentive” type of ADHD — a type that’s a lot less disruptive in the classroom. A child with predominantly inattentive ADHD won’t necessarily be a behavior problem for the teacher. She won’t talk out of turn or jump out of her seat during a lesson. But according to Dr. Larry Silver, clinical professor of psychiatry at Georgetown University Medical Center, she probably will:

We immediately made an appointment with an educational psychologist. We don’t yet know for sure that she has ADHD — or, if she does, whether or not other learning issues are also at play — but her alert teacher, who has a daughter with the same type of ADHD herself, gave us the heads up early on so that we could get her evaluated by professionals before she fell even further behind.

Not all girls are so fortunate.

In a Harris Poll survey led by D.C.-based developmental pediatrician Dr. Patricia Quinn — author of more than 20 books on ADHD for children, including “Attention, Girls! A Guide to Learn All About Your AD/HD” — four out of 10 teachers reported more difficulty in recognizing ADHD symptoms in girls. And 85 percent of the teachers and more than half of the parents and the general public believe that girls with ADHD are more likely to go undiagnosed. 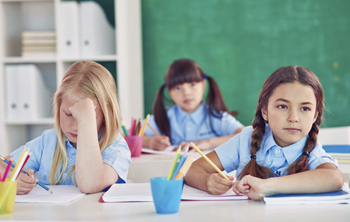 “Girls with ADHD are more compliant and are not as easy to spot,” Quinn explained in an online interview with the Edge Foundation, a nonprofit that helps high school and college students with ADHD. “Often they are left to drift along from one school year to the next, never working up to their potential and suffering silently.” As many as 75 percent of girls with the disorder may be missed, according to ADDvance, an organization created by Quinn and clinical psychologist Kathleen Nadeau.

Quinn’s survey also found that while boys who are struggling in school are more likely to be evaluated for ADHD or a learning disability, girls who are performing poorly are more likely to be asked to repeat a grade — something that can be counterproductive and further hamper their already floundering self-esteem. (Girls with ADHD tend to have more self-esteem problems than boys, as well.)

“They might get an A on a report, but because they had to work three times as hard to get it, they see themselves as not being as smart as other people,” Quinn told ADDitude magazine, a publication for people with attention deficit disorders.

And girls with ADHD are less likely to finish a four-year college than other girls, according to a 10-year body of research from Stephen Hinshaw, Ph.D., professor of psychology at the University of California at Berkeley and vice chair for psychology at UC-San Francisco.

The “gender gap” in ADHD diagnosis is better today than it was when Hinshaw first started publishing on girls with the disorder in 2002, doubling the published literature on the topic with his first article. In “The ADHD Explosion: Myths, Medication, Money, and Today’s Push for Performance,” due out next month, he says that boys’ ADHD diagnoses now outpace girls by only 2.5 to 1.

“No boys follow-up has ever found anything like this,” Hinshaw told the Chicago Tribune. “Boys with ADHD are more aggressive; later there are job problems. With girls, a startlingly high risk exists for directing negativity inward, transforming into very self-destructive behavior.”

Fortunately, there are more resources today than ever before specifically aimed at helping girls and women with ADHD. Quinn’s ADDvance organization has a whole section for women and girls at http://www.addvance.com/help/women/index.html and an online bookstore featuring dozens of titles focused on the needs of girls and women who have ADHD.

Finally, here are a few tips from ADDvance to help your daughter succeed if she has ADHD: