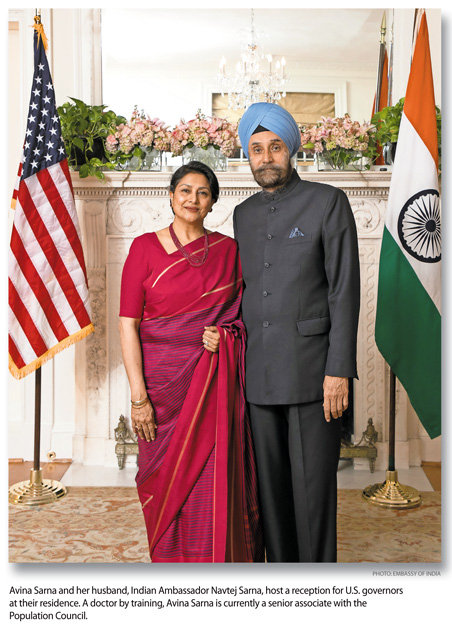 Avina Sarna, wife of Indian Ambassador Navtej Sarna and a mother of two, is a fascinating dichotomy of modernity and tradition.

A medical doctor by training who has published extensively on issues related to HIV/AIDS, she is currently a senior associate with the Population Council, which she joined in 2001 to lead the group’s Access to HIV Treatment global operations. As part of her work, she has documented barriers to antiretroviral treatment, studied the link between reproductive health and HIV services and led research on HIV prevention and treatment among injecting drug users and microbicide adherence among female sex workers.

In other areas of her life, Sarna is what many Americans would consider to be old-fashioned. She is proud of her arranged marriage to her husband and unabashedly prods her own children to get married and have babies while they’re still young, while at the same time supporting their high-powered legal careers.

Likewise, her husband is a somewhat unconventional diplomat. A seasoned envoy who has served in high-level postings — among them, as India’s high commissioner to the U.K. and ambassador to Israel — Navtej Sarna is also a noted author who has dabbled in fiction writing, including his first novel, “We Weren’t Lovers Like That.” The 2003 novel follows the life of a 40-year-old man whose wife leaves him for another man, forcing him to contemplate reclaiming a long-lost love and missed opportunities.

Amid postings to places such as Moscow and Tehran, Navtej wrote novels and short stories such as “Savage Harvest,” “Indians at Herod’s Gate” and “Second Thoughts: On Books, Authors and the Writerly Life.” Meanwhile, his wife continued practicing medicine, working as a physician in India, Poland, Switzerland and the United States.

“It’s been a charmed life,” Avina told us. “You have to have an open mind for all the experiences in diplomatic life. One of my favorite sayings is, ‘Those who were there, will know what I mean, and those who weren’t there won’t understand.’”

Avina has used that open mind to adapt to each place where they were posted. “In Iran, I had to learn Farsi and wear a hijab [headscarf]. It really set me free; I traveled all over the country. It was great. In Poland, Chernobyl [the 1986 nuclear disaster] happened. There was an abundance of fruit but we couldn’t even taste it. It was contaminated. The whole summer, there was fruit rotting by the street. When we were posted in Geneva, I learned to speak French well enough to see patients in French.”

And in Thimphu, Bhutan, she ran the maternal, child health and family planning center. She has also conducted research on nutrition in Iran and on high-dose folic acid therapy for hemodialysis patients in the United States.

“My [medical] work is exciting and difficult to give up. We’re working on the first national study of 133,000 adolescents and young women and their nutrition,” she said.

When the Sarnas were posted to D.C. from 1998 to 2002, she received her master’s degree from the George Washington, where she studied reproductive health, gender issues, family planning and HIV. “It was a Rockefeller program. I worked part-time, two days a week and headed the office,” said Avina, who also earned a Ph.D. from Ghent University in Belgium.

While Avina’s career has tackled progressive issues such as HIV prevention among female sex workers, her personal life has been underpinned by traditional beliefs.

“We had an arranged marriage. We agreed and our parents thought it was good. We were engaged within the week,” said Avina. She recalled her future husband, who was in the Foreign Service at the time, telling her: “Only say yes if you agree to two things: You will never go to work and you will never be rich.”

Fortunately, Avina said the diplomatic rules changed over time “for noble professions” such as medicine and teaching and she was allowed to continue working throughout her husband’s postings.

“I was already an MD and I worked all my life. We may not be rich, but we are very rich in experiences,” she said. “We fell in love during the year-and-a-half engagement and sorted everything out. Any other way [than an arranged marriage] would have never worked for me. I couldn’t have gotten a better husband if I scoured the earth.

“We are Sikhs. It is a relatively young religion that came out of Hinduism as a reformist movement,” she continued. “The men wear turbans because we are not allowed to cut our hair, ever. Sikhs are known for their military prowess and have fought in Europe and the Middle East in both World Wars,” she noted.

As Avina continued to practice medicine and her husband moved up the diplomatic ranks, eventually becoming spokesman of the Ministry of External Affairs, they also had a family. Today, their two grown children, a son and daughter, both live in New Delhi. 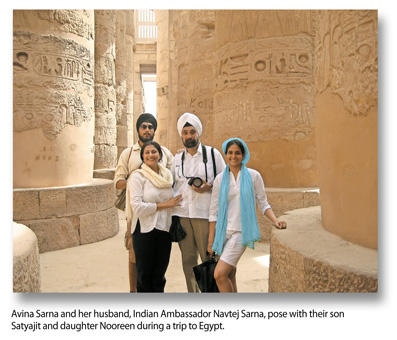 “Satyajit, whose name means ‘the truth will always win,’ is 32 and a lawyer. Our 26-year-daughter Nooreen, whose name means ‘radiant,’ is a lawyer too, working for a Supreme Court judge who is an ex-minister. I always say, ‘Don’t mess with me. I have two children who are lawyers!’” she joked.

“They live in our family house in Delhi. That is the usual arrangement. Living on different floors, they can have independence and yet the family can be close.”

Avina isn’t shy about pushing both children to settle down. “I’m keeping my eyes open; I’m looking for Indians,” she said. “Their minds are closed to anyone we suggest. They will miss good opportunities…. Our son has been hanging around through school with 25 to 30 bachelor mates. Almost all of them are married now. There are only three left. He’s one of them. It’s time!”

But Avina said she realizes that she and her children view marriage and starting a family in a different generational light. “It’s good to have your childbearing when you are still young. Of course, women have a shorter window. You have to grab it. They think this is old fuddy-duddy thinking,” she said.

Despite her traditional views on marriage, Avina also stresses that the new India is a modern, enlightened global powerhouse that promotes gender equality. “We’re not really a developing country any more. Our economy is up; our GDP is going up to 8 percent. Four heads of our major banks are ladies. We offer six months of maternity leave. Ninety-six percent of our children are enrolled in school. Eighty people out of 100 have cell phones,” she said. “We are way ahead in some things. We have world-class female athletes in cricket, wrestling, shooting. We wish everyone had an awareness of all aspects of our development.”

She added: “We have many women ambassadors all over the world. In the last batch of Foreign Service recruits, almost half were women. We have had three lady foreign secretaries and our current foreign minister is a lady, Sushma Swaraj. We have had a lady prime minister, Indira Gandhi, and a lady president.”

As much as she’s enjoyed diplomacy, it is time for the couple to move on. Her husband will retire from the Foreign Service next year but continue writing. She plans to still work part time but in one place.

“I was a military brat; every two to three years we moved again. Now, I like to be in one place. As I’m growing older, I’m scaling down,” she said.

“Diplomacy can be very exciting. I love interacting with different people — it’s been a party. We’ve made such lovely friends and we stay in touch. I love going to a party and seeing all the people [and] smelling all the food. We are open to all cuisines. We have a cook and I love to cook but my husband doesn’t. I think he’s a bit spoiled — a pampered man. I’m never comfortable with men washing the dishes,” she quipped.

Avina said some aspects of diplomatic life have been difficult, such as managing the household in Warsaw, Poland, with a young baby in tow, although she stresses that “you must never feel sorry for yourself, never whine.”

“Life is about others, not yourself,” Avina said. “It’s about your spouse, your parents, your children, your siblings. We need to grow up and put ourselves last.