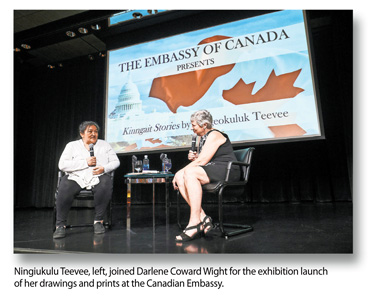 nfluenced by the culture and tales of Canada’s Inuit people and the changing landscape of Cape Dorset, artist Ningiukulu Teevee weaves together a visual story that blends abstraction with representation and tradition with modern-day struggles.

The Embassy of Canada partnered with the Winnipeg Art Gallery (WAG) to feature Teevee’s drawings and prints in the exhibit “Kinngait Stories.” With a total of 29 pieces that Teevee worked to create since 2005, the exhibit marks the first solo display of a Canadian Inuit artist in the United States.

Inuit art tells the stories and myths of this indigenous group of people who are native to the Canadian Arctic. As a supporter of Teevee’s work, Darlene Coward Wight, curator of Inuit art at WAG, visited the artist in Cape Dorset in March 2017 for a week to witness her artistic process. Wight said she formed a personal connection with the art and with Teevee that in turn sparked the idea for the exhibition, which coincides with the 150th anniversary of Canada’s confederation (also see “‘Punctured Landscape’ Surveys Highs and Lows of 150th Anniversary of Canadian Confederation” in the July 2017 issue of The Diplomat).

A video made during Wight’s excursion offers insights into Teevee’s drawings, intertwined with the artist’s backstory. Teevee’s simple but striking creations have elements of whimsical abstraction while integrating patterns found in nature, including birds such as owls and ravens. While Teevee incorporates the Inuit culture into her stories, she views them through a contemporary perspective. Despite her quiet, soft-spoken nature, Teevee boldly communicates her style through her dramatic pieces, rather than the spoken word. 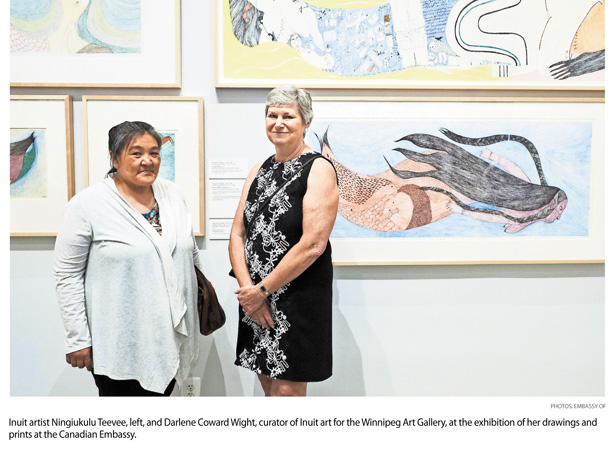 “There are a lot of sobering messages when you carefully look at the artwork,” Sheila Riordon, minister of political affairs for the Embassy of Canada, said. “[W]e are placing an emphasis on bringing culture, Canadian culture, to the embassy and of course bringing Inuit art as a way of exposing Americans to that part of our culture,” she said.

One piece that speaks to the modern-day struggles that the Inuit people grapple with is Teevee’s large-scale work titled “No Excuse for Abuse.” Composed of graphite, colored pencil and chalk, the piece portrays the myriad daily hardships that women endure. Among the visuals we see are a woman with scars battling breast cancer, a pregnant woman smoking and drinking and a man in handcuffs arrested for abuse — scenes that also convey the universal struggles women elsewhere face. 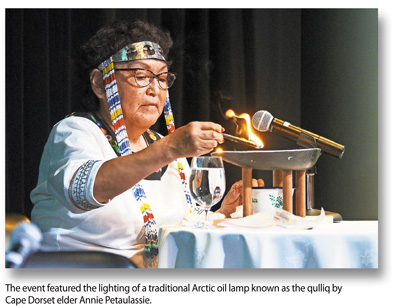 Domestic abuse is a compelling theme in some of Teevee’s works, such as her depiction of a woman fighting off a man holding her bra. The images stem from Teevee’s personal life, she said at the opening reception for her exhibition in mid-June. In her childhood, Teevee said she recalled her father hitting her mother frequently.

“This was sort of unusual for Ning,” Wight said. “She usually does the more traditional stories, even though she does them in untraditional ways…. But this one really, really startled me into complete attention.”

Teevee’s penchant for untraditional art is evident in works such as “Neutralizer,” which illustrates the story of a woman hoping to transform into a raven after her husband hurt her. The modern twist is seen in the raven’s foot, which is encased in a high heel. This refreshing take on Inuit tradition mixed with contemporary themes such as women’s empowerment imbues Teevee’s work with a universal appeal that resonates beyond the confines of the Canadian Arctic.

Wight said that Teevee is a unique storyteller who has the ability to capture the culture of her people while also tackling the present-day issues that confront both the Inuit and society at large.

Morgan Caplan is an editorial intern for The Washington Diplomat.