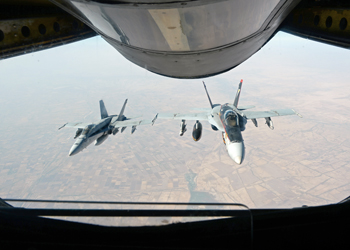 Many people have assigned labels to the Sunni radical group that calls itself the Islamic State, also variously known as ISIS, ISIL and Daesh. President Obama is often credited with labeling them the “JV” team of terror, hinting at their minor-league status. Yet Pentagon officials have admitted that the battle against the formidable adversary could take years. The media often portrays the group as somewhere between nefarious terrorist masterminds who use violence to manipulate public perception and masochistic imbeciles who kill everything in their path.

Syria is marching into its fifth year of civil war. In the summer of 2014, the Islamic State (IS) burst onto the world stage as they pillaged their way through north Syria into eastern Iraq, most notably taking over the multi-confessional Iraqi city of Mosul. The Islamic State was a reincarnation of al-Qaeda’s lethal branch in Iraq, which emerged in response to the American-led invasion, but the group’s ambitions flourished when it sent the al-Nusra Front into Syria near the start of the Syrian war.

The two entities would later split and fight each other, as al-Nusra aligned with al-Qaeda and IS expanded into Syria, calling itself the Islamic State of Iraq and al-Sham. After declaring the re-establishment of the Islamic Caliphate, they dropped the latter half and simply named themselves the Islamic State.

Aside from its formation, not all that much is known about the Islamic State. Abu Bakr al-Baghdadi, an Islamic religious figure allegedly from Samarra, is the self-proclaimed caliph. But beyond the loosely connected details of his life and a few other prominent leading figures, little is known about the group’s origins, capabilities or appeal.

Books and articles written by various journalists and experts conjure the image of a band of radical masterminds able to corrupt their violent and disillusioned underlings. Various investigations show that thousands of Westerners have heeded the call to become foot soldiers in the extremist movement, but the motivations of these newbie jihadists remain muddied.

Some have fled disadvantaged homes seeking better lives while supposedly avenging Western subjection of Muslims everywhere. Others came from educated, established backgrounds. They hail from wealthy and poverty-stricken countries alike. Some recruits have memorized the Koran with religious zeal, while many others don’t seem to be well versed in Islam. In addition, there is no concrete number that indicates how many Westerners are fighting on the ground in Syria and Iraq.

What is clear, though, is that much like al-Qaeda before the 9/11 terrorist attacks, our knowledge of the self-proclaimed Islamic State is riddled with gaps.

“[Our intelligence] is improving substantially compared to where we were a year ago,” Brian Katulis, a senior fellow at the Center for American Progress who focuses on national security and the Middle East, told The Washington Diplomat. “The thing we’re still lacking is enough human intel coming from inside the movement and an understanding of how it makes decisions or how it decides to take certain actions.”

A cross-border incursion into Syria from Iraq earlier this year killed a top financier and organizer behind the Islamic State’s rise and provided more inside information. But a lack of human intelligence in Syria has made it difficult for American intelligence agencies to get a better read on the group. The presence of U.S. troops in Iraq for more than 10 years following the invasion and subsequent occupation helped these agencies develop useful resources on the ground. The same cannot be said for Syria, where a steady diet of U.S. airstrikes has killed thousands of Islamic State fighters but failed to decapitate the group.

Obama has ruled out putting boots on the ground in Syria, further limiting the intelligence that can be gleaned from a chaotic battlefield littered with disparate rebel groups. The tangled web of actors — not to mention the proxy powers supporting them, from Iran and Qatar to Saudi Arabia and Turkey — has confounded outsiders trying to keep up with a conflict that has claimed at least a quarter of a million lives (even firm estimates of Syrian casualties are hard to come by).

“We have this general sense that IS feeds off a sense of grievance but beyond that we don’t have a great deal of clarity in anticipating what it might do next,” Katulis said. “It’s still very much mixed to negative in terms of results. We have gaps in understanding their political agenda and how it connects to the population.”

The Obama administration has insisted that the campaign against the Islamic State is proceeding according to plan, but critics remain dubious. These gaps in intelligence came into question again when U.S. civilian analysts claimed that Central Command (CENTCOM) was spinning reports favorably to tow the administration’s line that the United States was winning the fight against the Islamic State.

“The cancer was within the senior level of the intelligence command,” a defense official told the Daily Beast in a report that said 50 analysts supported a complaint — signed by two senior CENTCOM analysts — over pressure to portray terrorist groups in Syria and Iraq as weaker than they really were.

Public officials are notoriously loath to admit the shortcomings of any military campaign. But one former NATO official, writing anonymously in the New York Review of Books this summer, offered a candid assessment of the failings of the international community to predict the rise of the Islamic State. Amid this black hole of intelligence, widely divergent — and contradictory — theories have emerged to explain the group’s successes, yet none fully account for its meteoric rise, according to the article “The Mystery of ISIS.”

As an example, the author cites the bewildering ascension of Abu Musab al-Zarqawi, an obscure Jordanian video store clerk who became the leader of the Iraqi al-Qaeda branch that was a precursor to the Islamic State.

“Who then could have imagined that a movement founded by a man from a video store in provincial Jordan would tear off a third of the territory of Syria and Iraq, shatter all these historical institutions, and — defeating the combined militaries of a dozen of the wealthiest countries on earth — create a mini empire?” the official wrote, arguing that “rigor, imagination and humility” are needed to better understand the Islamic State phenomenon.

“The explanations so often given for its rise — the anger of Sunni communities, the logistical support provided by other states and groups, the movement’s social media campaigns, its leadership, its tactics, its governance, its revenue streams, and its ability to attract tens of thousands of foreign fighters — fall far short of a convincing theory of the movement’s success.”

The author notes that many other insurgent groups had far more resources than the Islamic State initially did yet ultimately failed to compete with it. The Islamic State’s land grab has also bucked conventional insurgency wisdom that melting into territory — not holding and governing it — is the key to success in asymmetric warfare.

On that note, analysts have variously described the Islamic State as skillful bureaucrats on the one hand and inept occupiers on the other. Yet contrary to reports that the group’s medieval brand of nihilism repels the local populace, the Islamic State has managed to carve out and retain a foothold across vast stretches of territory. Is it offering people much-needed law and order, cowering them into submission or tapping into deep-seated religious fervor?

The truth is that defeating the Islamic State will be more difficult and complicated than political rhetoric would currently have the public believe. Pledges to denigrate and destroy the Islamic State are as vague as the West’s understanding of the group.

“You’re not going to destroy them,” Lawrence Korb, a former assistant secretary of defense under the Reagan administration, told The Washington Diplomat. “You can contain them and hope their narrative will get undermined. You’re not going to kill them all. This is going to go on a long time.”

“I see IS more as a symptom of a broader problem of a lack of political legitimacy and a sense of injustice and indignity,” Katulis added. Without addressing these issues, “we are hardly any closer to seeing the political defeat of IS, and not as close as we should be on the security front.”