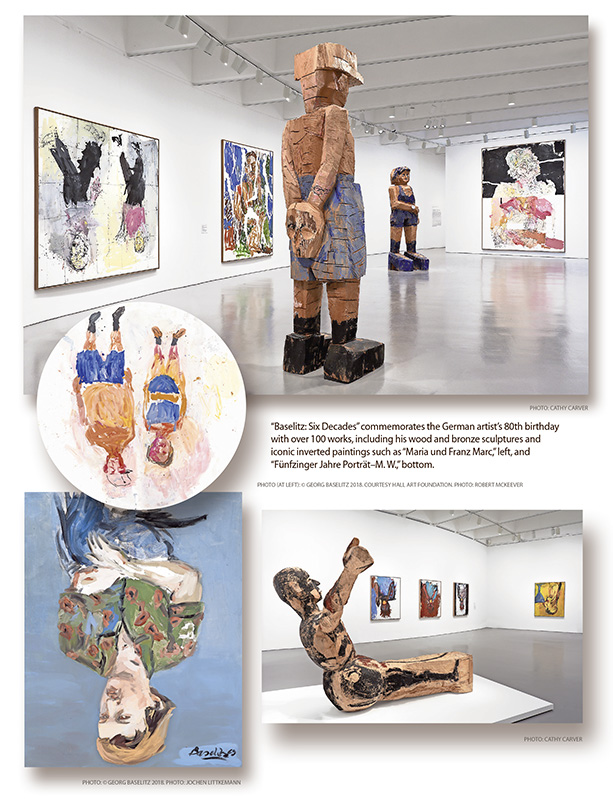 Chaos is the plumb line running through the work of Georg Baselitz, currently on view in a career retrospective at the Hirshhorn. The German artist, still active, trained on both sides of divided Cold War-era Germany. His work boasts similar divisions. Baselitz twists familiar artistic forms, inverts his images upside down and generally draws into his palette the scars left by the often-troubling times in which he’s lived.

“Baselitz: Six Decades,” the first major U.S. retrospective of the figurative artist’s work in over 20 years, commemorates Baselitz’s 80th birthday and builds on a 1996 Hirshhorn exhibition of his art. Over 100 works chronicle every phase of Baselitz’s six-decade career, including his iconic paintings, works on paper and wood and bronze sculptures. They explore Baselitz’s innovative depictions of the human figure and, for the first time ever, the influence American abstract expressionists had on his formative early work, as well as his ongoing impact on contemporary American painting and sculpture.

Born in 1938, a year before Germany invaded Poland, Baselitz’s father was a Nazi Party member who was banned from teaching after World War II. The artist’s lifetime spans Europe’s conflicted 20th century. He wound up embedded in its chaos throughout his career, as Cold War tensions overlapped with Germany’s struggle against domestic terrorism with the emergence in the late 1960s of the Baader-Meinhof Group. Even as he moved between media, the anxiety of ever-present conflict is present throughout.

Baselitz came of age in post-war East Germany, where he studied the officially sanctioned art form of social realism in communist Berlin. In 1957, he was kicked out of East Berlin’s Academy of Fine and Applied Arts for “sociopolitical immaturity” — a term with heavy shadings of the Nazi label “degenerate art” — and continued his studies in West Germany. The move was fortuitous because it brought Baselitz into more direct contact with the works of Western artists that would influence him heavily, starting with Jackson Pollock. Pollock’s signature drips and splashes quickly appeared in Baselitz’s work after the move, as did bold colors and blurred forms that suggest he was also drawn to Willem de Kooning, Philip Guston and perhaps Mark Rothko.

Beyond the influence of specific artists, however, Baselitz developed his own distinct style during a seemingly lifelong mission to shake up classical modes of painting. Most artists push back against the prevailing conventions of their time. Baselitz, however, appears unique in doing so systematically and with the single-mindedness and care of someone painstakingly setting up an elaborate domino display so they can knock it down with glee. 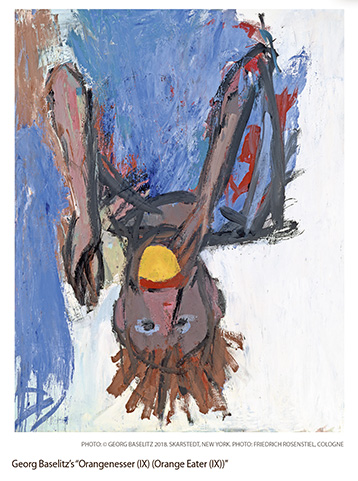 He offers contorted approaches to still lifes, triptychs and, most famously, his series of “inverted” portraits that earned him international acclaim. There is no great trick in turning a painting upside down, and for all of Baselitz’s stated intent to “free” his portrait subjects from their traditional context, at first glace little is gained from the tactic other than gimmickry. The images themselves, however, are stark, and after a while, particularly in large works, the eye is drawn to parts of an inverted canvas that a viewer might otherwise overlook. Overall, the “inversion” seems political: a nod to the fact that the 20th century quite literally turned the world on its head.

The exhibition also features one of Baselitz’s most notable and shocking works, 1962’s “The Naked Man,” which was confiscated by authorities both for its lewdness and its critique of Germany’s socialist politics.

Political punishment early in life didn’t quash Baselitz’s impulse for bold political statements. In “Finger Painting – Eagle” (1972), he renders the symbol of German (and American) nationalism in a child’s hasty style — a statement in itself. The image is also inverted, but here with profound meaning: This eagle doesn’t soar; it plummets against a stormy sky that disintegrates into Pollock-like drips at the bottom edge of the canvas. The criticism of post-World War II nationalism is hard to miss.

At the same time, Baselitz celebrates the postwar strength of the German people in series such as “Heroes,” which reverberates with the violence of his time. His heroic figures — abandoned in what the exhibition calls a “post-apocalyptic landscape” — are ragged but noble. In their ravaged world (even Baselitz’s trees bleed through bandages), his subjects stand up straight, defiant in their dignity, their outward glances suggesting a future beyond the present wreckage. They are survivors among the ruins, getting ready to rebuild — human symbols of a postwar Germany.

Baselitz turned to sculpture later in his career, with controversial results. His “Model for a Sculpture” debuted in 1980 at the Venice Biennale, where some viewers saw in its outstretched arm the echoes of a Nazi salute. But that interpretation becomes harder to imagine after spending time with the piece. The seated figure’s right arm is raised upward and outward (once again defiantly, heroically) in either a gesture of openness, greeting or perhaps an attempt at an embrace. He may or may not have a left arm. There’s a block where his legs should be. Far from an aggressor, it is a portrait of a wounded warrior, only this time in three dimensions.

“I keep being surprised that new things are possible,” says Baselitz in a video near the end of the exhibition, where pieces completed as recently as last year wrestle with the artist’s mortality in more abstract images. It’s a welcome message to hear from anyone who has devoted decades to a career in any one craft, and seeing Baselitz’s most recent work last, one leaves the exhibition on a hopeful and vital note. In the video conversation, the artist has a cheerful and affable manner that belies the often-ominous mood of his work. It also underscores the optimism that runs alongside the chaos throughout it.