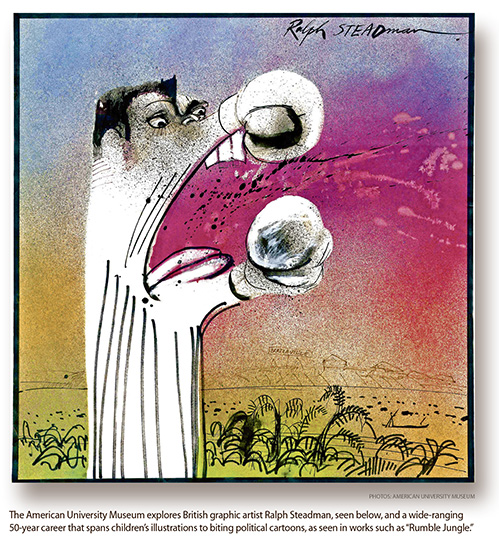 British graphic artist Ralph Steadman’s advice to young artists is that there’s no such thing as a mistake — only the opportunity to do something else. The 82-year-old artist is as personally colorful as are his dark-humored illustrations and caricatures, which veer from fantastical beasts to unflinching social commentary.

The frenzied, whimsical nature of his work belies the technical mastery behind it. Steadman has honed his skills over the last 50 years, creating a distinct style that raises the bar on cartoon drawing. He advises young illustrators not to spend too much time pre-penciling — instead start right away in ink.

“There’s a psychological nature in drawing,” he told us. “It’s a silent process — of course unless you do it to rock ‘n’ roll.”

The eccentric artist’s illustrations will be on display at the American University Museum in “Ralph Steadman: A Retrospective.” The exhibit will explore the full breadth of Steadman’s work, including his earliest published cartoon from 1956 as well as a previously unknown piece created around the 1974 boxing match between Muhammad Ali and George Foreman. The collection of over 100 original artworks takes viewers on a wild ride through Steadman’s long and varied career, which ranges from prominent magazines to children’s books.

Steadman is particularly famous for his longtime friendship and collaboration with writer Hunter S. Thompson, a counterculture icon who founded the gonzo journalism movement, which mixes firsthand narrative and fictional storytelling with traditional reporting. Steadman provided illustrations for Thompson’s cult novel “Fear and Loathing in Las Vegas,” which examines the American dream through a drug-induced haze.

The New York Times wrote that, “Steadman’s drawings were stark and crazed and captured Thompson’s sensibility, his notion that below the plastic American surface lurked something chaotic and violent. The drawings are the plastic torn away and the people seen as monsters.”

Reflecting on Thompson, who committed suicide 13 years ago, Steadman said, “He wasn’t very diplomatic in a maneuverable, usable function; he never really was…. One thing he said was, ‘I’d feel real trapped in this life if I couldn’t commit suicide at any moment.’” 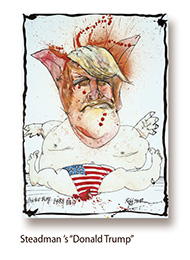 But his collaboration with Thompson was just one piece of a wide-ranging career. Steadman has produced work for publications such as Rolling Stone and the New Statesman, as well as classic novels like George Orwell’s “Animal Farm” and the 50th anniversary edition of “Fahrenheit 451.”

Steadman in particular takes an unapologetic aim at President Trump, whom he calls an “awful character.” One drawing shows him as “Trumpelstiltskin,” a play on the greedy children’s fairytale character Rumpelstiltskin. “He is not a politician,” Steadman told us. “At least Tricky Dicky was,” he added, referring to President Richard Nixon’s nickname.

There’s another savage Trump satire where Steadman portrays him as a grotesque baby soiling his red, white and blue diaper. “He’s the worst thing that’s ever happened to this beleaguered country,” the artist declared. 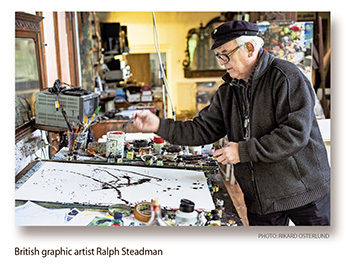 “‘Francis’ was a wonderful, eclectic experiment,” he said of the print, which depicts a table of screaming, almost maniacal blobs around a bloody turkey. “Conventional portrait painting is rather unadventurous,” Steadman said.

Accompanying the exhibit is a 160-page color catalogue that includes a forward by Johnny Depp, journalist Carlo McCormick and artist Anita Kunz.

As far as future projects, Steadman isn’t slowing down as he continues to experiment with unconventional techniques and imagery. He said he has begun a series of drawings using water that he washes his paintbrushes in. “The water gets dirtier and dirtier and older and older and it starts to smell a bit if you leave it long enough,” he explained.

Steadman then tips the dirty water onto paper about three feet up and it splats onto the page. “You then shake it a bit and move it this way and that,” he said. “Then you leave it and it takes about three days to dry. The textures are really fantastic.”