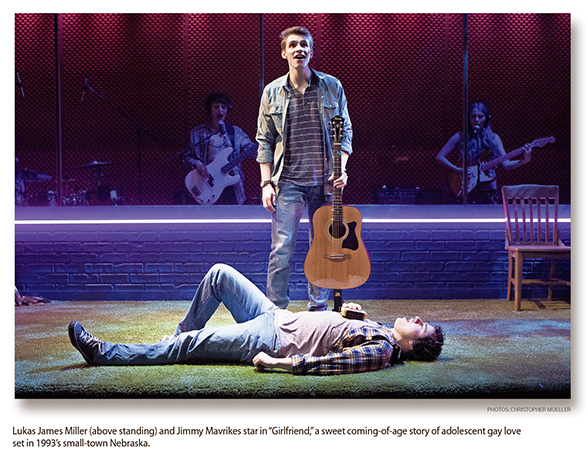 The D.C. premiere is seen by an audience for whom legalized gay marriage and openly gay legislators and celebrities have become the norm, and in this way, the script doesn’t offer ground-breaking revelations. However, it does explore a side of homosexuality that has been largely absent in cinema and theater over the years: It offers a sweet love story that doesn’t politicize or emphasize the struggles gay people have endured, such as the AIDS epidemic or LGBTQ discrimination.

Of course, the fact the play is set in the early 1990s in the rural Midwest does pose issues of acceptance and anti-gay sentiments, but for the most part, the script is light, humorous and infused with gratifying emotions.

“It is a messy, uncomfortable and weird time, but also thrilling,” said Signature Theatre Associate Artistic Director Matthew Gardiner, who directed and choreographed the production. “And nothing is more thrilling at that point in your life than falling in love for the first time, especially as a gay teenager. To realize there is someone else out there like you, someone you can connect with on that level is such a life-changing moment.” 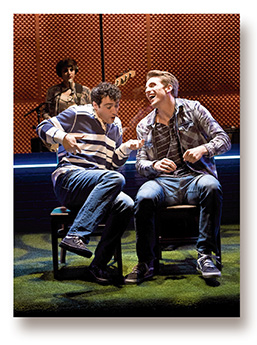 The first loves’ backdrop is based on a semi-autobiographical book by Todd Almond and features the music and lyrics of Matthew Sweet’s iconic ’90s alternative rock album “Girlfriend.” An all-girl band accompanies the boys’ courtship within a glass partition (recording studio style) behind the characters’ action. The music contains the 1991 single hit “Girlfriend” from Sweet’s third album. Musicians Britt Bonney, on keyboard; Beth Cannon, on guitar; Nicole Saphos, on bass; and Erika Johnson, on drums, are not only fine-tuned musicians, but also look the part with their 1990s iconic grunge hairstyles and clothing.

The band functions like a Greek chorus, which the boys accompany with pleasing vocals that become their language of love. The teens are immersed in the music, as most youth play out their life stories to the tunes and lyrics of their time — in this instance through coveted, shared mixed tapes.

It’s the summer between high school and college and Will (Jimmy Mavrikes), a doe-eyed adolescent who is demonstrably gay and unsure of his future, encounters Mike (Lukas James Miller), a successful high school athlete headed for college, who is slower to acknowledge emotions he feels are forbidden.

The two engage in a slow courtship that plays out mostly at the local movie drive-in where they sit night after night in cautious attraction to each other. Not much conversation is exchanged — Will tends to spout off stream-of-consciousness babble about the movie and what it reminds him of, to which Will offers monosyllabic responses. Yet their subtext is so thick you could cut it with a knife.

Although Will at times overplays his youthful enthusiasm in loud outbursts while alone in his room, his character blossoms to embrace confidence and amorous vulnerability, which lures Mike out of his shell. Mike, in his macho reticence, explains to Will at the beginning of the play that he has a “girlfriend” and just wants to hang out. He is slower to realize his true intentions, explaining that his father is overbearing and homophobic.

The boys’ feelings for each other are tested by a homophobic slur calling them “faggots” from some boys on the street, and the audience is reminded that their romance isn’t obstacle free, making it more precious and valuable.

Gardiner’s handling of the tentative romance is gentle and touching, as it explores the thrill and terror these two experience — assumingly without role models to pave the way for them.

Will exclaims lines like, “My life becomes the musical I always knew it was,” when Mike, over the phone, serenades him a sample of a mixed tape, and “I’ve been waiting my whole life to have a boy ask me to run errands with him” when Mike asks him to help him find boxes for his move to college.

However, at other times the play veers from the authentic to the corny, especially toward the end when the boys coincidentally cross paths after their heartfelt departure at summer’s end.

Although the play isn’t on the level of Signature’s usual fare in profoundness and execution, “Girlfriend” holds up to what it’s meant to be: an intimate glance into the lives of two young kids who succeeded in choosing each other against society’s norms. It’s a coming-of-age love story that includes drive-in movies, boom boxes, mixed tapes and first kisses. Whether or not you’re a baby boomer and lived through the ’90s or whether or not you’re gay and experienced coming out, the play and its makings are universal symbols of the true feelings of youth.