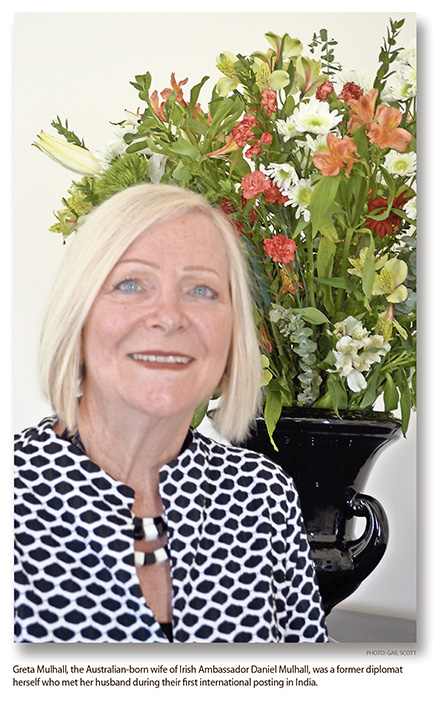 Greta Mulhall, the wife of Irish Ambassador Daniel Mulhall and a former diplomat herself, embodies multiculturalism in today’s globalized world.

“I was born in Perth, Western Australia; my mother’s family, the Hennerys of County Armagh, left Ireland in the 1870s to start a new life in Australia,” she told us. “I am Irish and Australian … it’s not a contradiction. I can be Australian and Irish at the same time. I am part of two diasporas — equal amounts of Irish and Australian in my own head. I still have retained some of my twang from Australia, but having now lived in 10 different countries, it has softened over the years. A lot of my adult life has been spent in the company of Irish people, so I am sure I use a lot of English words that would be more associated with Ireland and less of the Australian colloquialisms.”

All of her young life, Mulhall dreamed of traveling and embarking on a “walkabout,” the Australian colloquialism for indigenous youth who undertake a journey to transition into adulthood. “It’s a rite of passage for Australians,” she said, although her “walkabout” didn’t involve a trek through the Australian Outback. “The Beatles and [London’s] Carnaby Street were the place to go in my day.”

Instead, Mulhall joined the Australian Foreign Service. On the way to her first foreign posting in India, she stopped in for three months in Sri Lanka, the colorful island south of India.

Shortly after she arrived in New Delhi, she met a young Irish Foreign Service officer who was also there for his first international posting.

“I met Dan three days after I arrived in a popular watering hole, an Australian bar. I was not looking for anyone but he asked me out,” she recalled. “So we had our entire posting to enjoy our courtship. We were married 18 months after we met. We decided to marry in India, as it was roughly halfway between Ireland and Australia. Four members of each of our families attended the wedding, along with 100 of our diplomatic colleagues and Indian friends. It was a magical event — fairy lights around the garden, Indian food served in a colorful shamiana [an Indian ceremonial tent] with carpets laid on the grass.

“Ten months later, our daughter Tara was born. She is now 35 and lives in Edinburgh, Scotland, with her husband William and their two daughters,” Mulhall continued. “I try to see our two little granddaughters every 10 weeks as they are growing so quickly and I want to be a part of their lives. I am a very proud grandmother, completely besotted by our two darling little girls. They came to Washington for Christmas and will return again in the late summer.”

Their son Jason, 33, is an entrepreneur with a background in law and business. “His company is called Karousel. He has introduced street food to corporate offices in London by rotating around 50 street traders to more than 24 corporate offices in the center of the city,” Mulhall explained. “Office lunches are not the same as I remember them — Mongolian dumplings, sushi or organic super salads seem to be popular. He also does festivals, weddings and corporate events. The formula seems to be working.”

But having two children and two diplomats in the family did not work out indefinitely for the Mulhalls, and like many diplomatic spouses, Greta had to step back from work, although she continued to pursue her interests.

This dilemma, she added, is a common one for working women, especially those in a male-dominated Foreign Service.

“What do you do as an ambassador’s wife?” she mused. “I have my own personality, interests. We are absolutely a team but I also want to embrace my own life. You have to struggle to have your own identity.… Following someone else’s career and trying to be independent is tricky. I reinvent myself every couple of years,” she said. “I am very adaptable.”

The Mulhalls have lived in Australia, Austria, Belgium, Scotland, Malaysia (accredited simultaneously to Laos, Thailand and Vietnam), Britain, Germany and, of course, Ireland. Most recently, they lived in London where Daniel was Ireland’s ambassador to the U.K. Throughout these decades of nomadic life, Greta spent a number of years working at the U.N. International Atomic Energy Agency in Vienna, the European Union in Brussels and the Australian Embassy in Dublin.

Despite her global hopscotching, Greta remains nostalgic about her Irish roots, and wants to convey an accurate picture of modern-day Ireland to her American friends. 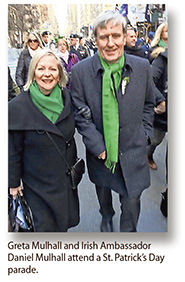 “Ireland is beautiful. The golf courses are, too. The Irish are pure humanity and wonderfully warm people with family values and a sense of humor.”

The classic image of Irishmen imbibing at local pubs is a bit outdated, though. “Drinking has toned down because people are much more conscious of their health in general, the DUI laws are being enforced and smoking is not allowed anymore in pubs. We have ‘gourmet pubs’ now. Our food is good — fresh produce, great seafood and great chefs.”

She points out that Ireland has preserved its identity and traditions, while adapting to changing norms and politics.

“Ireland remains a predominantly Catholic country, as clearly illustrated in the 2016 census where 78 percent of the population identified as Roman Catholic,” she said, noting that traditional Irish culture has shifted in recent years to keep up with the times. “The referendum which allowed divorce took place in 1995. In 2015, the Irish people voted in favor of [same-sex] marriage equality in a referendum, making Ireland the first country to do so.” A gay man currently serves as the prime minister, and the religiously conservative country also overwhelmingly voted in a referendum late last month to end a restrictive abortion ban that had been in place since 1983.

Despite their extensive travels, this is the Mulhalls’ first posting in the U.S. “I am thrilled to be in this post. I haven’t been here before. Washington is so great. It’s a beautiful cityscape — the Smithsonian and all the culture. The quality of life is wonderful and there’s so much history. My husband is a historian so he loves it.”

While she has yet to attend any of the ubiquitous national day receptions on the Washington diplomatic circuit, she’s been taking advantage of other local opportunities, including EU-related events, think tank lectures and visiting cultural institutions, in addition to joining a book club with 10 other diplomatic wives.

Mulhall is also appreciative of the warm welcome she has received. Shortly after they arrived at the Irish Residence on S Street in D.C.’s Kalorama neighborhood, their next-door neighbor Esther Coopersmith, a former U.S. permanent representative to the U.N. and a prominent Washingtonian, arranged a large, sit-down “welcome” dinner for the couple. “She also very generously invited us in at Thanksgiving,” Mulhall noted.

This veteran diplomatic couple is also fond of traveling outside the Beltway, planning trips like their visit to Colonial Williamsburg in Virginia.

“We returned from a trip overseas to visit our granddaughters and son and daughter for Easter. We were told upon our arrival at Dulles Airport that the cherry blossoms had bloomed in our absence, so we drove immediately from the airport to walk around the [Tidal] Basin to see them,” she said. “They did not disappoint. I subsequently went down twice again to see the blossoms in all their glory, plus walked around Kenwood with friends to see the beautiful cherry blossoms there. They were simply stunning.”