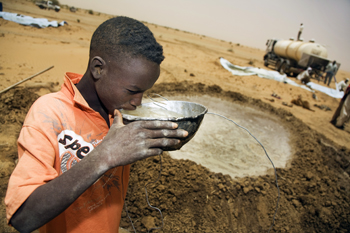 From Sept. 25 to 27, the United Nations will convene a major summit to adopt an ambitious post-2015 development agenda in the hopes of ushering in a new era of global progress — in part by learning from the past. During the New York summit, the world will officially bid farewell to the 15-year-old Millennium Development Goals (MDGs) and welcome their successor, the Sustainable Development Goals (SDGs).

The MDGs revived and focused the world’s development agenda by introducing quantifiable, time-bound targets for, among other things, eradicating extreme poverty and reducing hunger and disease. By some measures, this novel approach to addressing seemingly intractable global problems enjoyed impressive successes, pulling a billion people out of abject poverty. By other counts, the MDGs came up short or were incomplete to begin with.

The SDGs aim to fill that void, setting the stage for a 2030 development framework that builds on the successes and failures of the MDGs.

In 2000, a small team of experts gathered in a U.N. basement in New York and, in “relative casualness,” drafted the Millennium Development Goals. Despite their modest and somewhat ad hoc beginnings, the MDGs were widely endorsed and provided a roadmap for the direction of humanitarian aid and development assistance. The MDGs consisted of eight measurable, time-specific goals, among them: halving the number of people living in extreme poverty, achieving universal primary education, promoting gender equality, reducing child mortality, combating HIV/AIDS and ensuring environmental sustainability.

Experts praise the MDGs for their simplicity and results-oriented approach. Robert Muggah, research director of the Igarapé Institute and contributor to the SDGs, said that “by singling out key priorities, [the MDGs] also helped overcome collective-action problems and encouraged more pooled efforts,” arguably making the MDGs “one of the most powerful poverty reduction measures of the 21st century.”

A boy drinks a bowl of water in Tora village delivered by the African Union-United Nations Hybrid Operation in Darfur in 2010. Improving access to safe drinking water and basic sanitation was among the aims of the Millennium Development Goals.

The narrow scope of the MDGs created quantifiable metrics to monitor their implementation and progress. The latest MDGs annual report spells out some of the major achievements attributed to the goals: Globally, the number of people living in extreme poverty (defined as living on less than $1.25 a day) declined by more than half, falling from 1.9 billion in 1990 (the MDGs’ baseline year) to 836 million in 2015. In addition, the proportion of undernourished people fell by almost 50 percent since 1990, while the number of children not attending primary school also dropped by almost half, from 100 million in 2000 to 57 million in 2015.

Some targets were reached ahead of schedule while many were never met. Despite the mixed report card, there have been undeniable gains. Today, more girls are enrolled in school; fewer women are dying in childbirth; child mortality rates have plummeted, as have HIV and malaria infections; more people than ever have access to the internet, mobile phones and drinking water; and official assistance from developed nations has shot up.

In fact, when examined in a broader context, the MDGs may have reversed the decline in aid following the Cold War. Lord Mark Malloch-Brown, former head of the U.N. Development Program and a member of the team that drafted the MDGs, told The Washington Diplomat that “development as a funding and business model was in crisis.”

In the post-Cold War period, “nothing had replaced geopolitical competition for influence as a rationale for development assistance. And the development community itself was divided by disputes over means,” he explained. The MDGs led to a “realignment of development efforts” and “the birth of major new funding pools.”

Since the introduction of the MDGs, total official development assistance rose from $81 billion in 2000 to $135 billion last year. The goals also gave developing nations something tangible to rally around, if for no other reason than to impress the international community. Indeed, the MDGs provided individual countries with a universal scorecard against which to compete and compare gains.

“[The MDGs] were not perfect — far from it — but they changed the paradigm,” said Muggah.

Yet, the very same attributes that made the MDGs so successful — its methods for measuring specific outcomes — have also come under fire for being too crude and easily manipulated. A 2015 UNICEF report says the MDGs encouraged countries to gauge progress by using national averages, allowing many to focus on the easiest-to-reach communities and children — i.e. the low-hanging fruit — and not on the most disadvantaged ones. In doing so, countries may have slowed, not accelerated, progress. Poor recordkeeping in many countries has also cast doubt on some of the more optimistic MDG assessments.

Others say the goals were never ambitious enough, ignoring key areas such as social justice, sustainability, security and peace. Sakiko Fukuda-Parr, a professor at the New School in New York, argued that the MDGs are “galvanizing” but also “too narrow.” Jeffrey Sachs, director of the Earth Institute at Columbia University, also recognized the need for a broader post-2015 agenda that aims “not merely to achieve the MDGs where they have not been met” but also “to secure the basic material needs — and human rights — of everybody on the planet.”

Muggah adds that the MDGs “did not fully account [for] peace and security. These gaps may explain why some countries, especially those suffering from conflict, crime and violence, may not have achieved their basic targets.”

The United Nations admits that progress “has been uneven” and marked by wide disparities. Despite headway on environmental sustainability, for example, global carbon dioxide emissions increased over 50 percent since 1990. The world’s extremely poor remain unevenly distributed: In 2011, about 60 percent were concentrated in just five countries. Sub-Sahara Africa, in fact, saw the number of extremely poor people rise despite significant gains in education. And in countries plagued by conflict, the proportion of out-of-school children rose from 30 percent in 1999 to 36 percent in 2012.

Some critics also say the goals are given too much credit even in the areas where they are considered successful. For instance, a large chunk of the world’s poverty reduction over the last 15 years took place in China, which economists say would’ve achieved that growth regardless of the MDGs.

Columbia University’s Elham Seyedsayamdost found that “countries that have not integrated MDGs into their national plans were just as likely to allocate government funds to the social sectors as the MDG aligners.” Howard Friedman, also of Columbia University, notes that child mortality and HIV rates had already started to decline before the MDGs were adopted, suggesting they had only a limited effect on these trends.

Yet others say the simple act of setting goals had a tangible impact, saving and improving lives. Charles Kenny, a senior fellow at the Center for Global Development, points out that while the MDGs do take too much credit for the advances made in the last 15 years, they also “did make a marginal difference to rates of progress,” which “makes the goal-setting exercise worth a repeat.”

The MDGs’ emphasis on measurable, concrete results has been both lauded and criticized. The debates that arose as a natural extension of the goals’ complexity and ambition have given experts the basis on which to improve the post-2015 agenda. They have been doing just that — spending the last several years carefully mapping out the next generation of development goals. But has the international community designed a plan that will do what the MDGs could not?

SDGs: Full Circle or Not Feasible?

The Sustainable Development Goals are a continuation and an expansion of the MDGs. In contrast to their predecessor, the SDGs are the product of years of collaborative discussions, studies and summits. The meticulous process to establish a post-2015 agenda began at the U.N. Conference on Sustainable Development (dubbed Rio+20) in 2012, with a document outlining the SDGs released two years later.

Unlike the MDGs, which consisted of only eight goals, the SDGs comprise an impressive, if unwieldy, set of 17 main goals and 169 targets. The SDGs contain commitments on practically every front, from the economic to the social to the environmental. The goals address issues including energy, security, climate change, poverty, urbanization and inequality. This proliferation “reflects the fact that development is a much more varied business than the original MDGs allowed,” said Malloch-Brown. According to Muggah, the SDGs prove that “for the first time in its 70-year history [the United Nations] squarely acknowledged the vital relationship between security, safety and justice and development.” 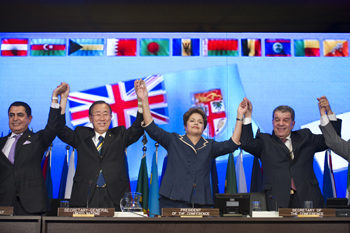 Although experts praise the SDGs for their more comprehensive approach, they also question whether the expansive scope is feasible. Monitoring all 169 targets would require unprecedented data collection across various disciplines, often in countries where recordkeeping is poor. Muggah notes that “there are at least 40 countries that lack even the most basic data to track performance.”

The SDGs are also far more ambitious in their aspirations. While the MDGs set out to cut extreme poverty in half and reduce mortality under the age of 5 by two-thirds, the SDGs aim to eradicate poverty in all its forms and ensure universal access to food and sanitation. Kenny contends that given current trends, it is unlikely that many developing countries would be able to achieve such audacious goals. For example, he estimates that at least 25 countries will not be able to provide universal sanitation. “Zero goals are no challenge for a bunch of countries that are already at zero, and too much of a challenge for a bunch of countries that are too far from zero,” he said.

The ambitious post-2015 agenda raises another issue: funding. Estimates show that ending extreme poverty around the world would cost around $66 billion annually, while eradicating hunger would require roughly $50 billion a year. While donors have pledged to step up their SDG contributions, their promises remain vague and many governments face their own budget constraints back home.

Some experts have suggested that the way to tackle the financing challenges is to focus on a smaller number of targets that offer countries more bang for their buck. For example, a Post-2015 Consensus Expert Panel identified 19 targets out of the 169 that represent the best value-for-the-money results, offering a $15-plus return on every dollar invested.

The large number of goals, however, will not necessarily obviate their utility. Countries will likely prioritize different targets depending on national circumstances. According to Lord Malloch-Brown, “the SDGs will inevitably become an à la carte menu not a fixed one. Countries will pick and choose what are the most pressing goals in their particular contexts.”

Regardless of the complaints and controversies, at this point, substantial changes are unlikely to be introduced before this month’s U.N. summit.

As the era of the MDGs comes to an end, governments continue to make progress on eliminating extreme poverty and improving human welfare. The debate over a post-2015 development agenda is a reflection of the complexity of such an enormous undertaking. The ability to maintain political will, attract private investment, motivate donors and mobilize society in the next 15 years will show if the SDGs wind up becoming aspirational platitudes or a plan for action that delivers results.

Bilyana Lilly (@BilyanaLilly) is a freelance writer in Northern Virginia and author of “Russian Foreign Policy toward Missile Defense: Actors, Motivations, and Influence.”