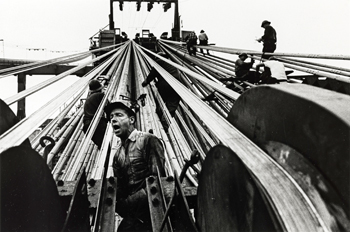 Instead of the somewhat prosaic title “American Moments: Photographs from the Phillips Collection,” you could just as well gone with “Who Knew?”

More than 130 works are featured in “American Moments: Photographs from the Phillips Collection,” including Bruce Davidson’s “Workers on Bridge, Telescoped View Looking Up”.

Who knew that the Phillips Collection — better known for its founder Duncan Phillips’ successful forays into collecting impressionist and modern paintings — was so rich in 20th-century American photography, spurred by Phillips’s own belief that photography was important for a museum devoted to modern art.

The result is the first major photography exhibition drawn exclusively from the museum’s permanent collection, featuring 130 works by 30 acclaimed photographers, including Esther Bubley, Alfred Eisenstaedt, Louis Faurer and Arnold Newman, among others.

Phillips’s affinity for photography probably stemmed from his close relationship with Alfred Stieglitz, a pioneering photographer who, like Phillips, supported the modern art movement, which had yet to be embraced by mainstream America. Phillips said Stieglitz had revolutionized photography, praising his technique as “not merely self-controlled but sensitive and intensely emotional.”

Phillips started collecting photographs in the 1940s, with 27 works by Louisiana native Clarence John Laughlin and 19 from Stieglitz’s “Equivalents” series. Although photography was never the main focus of Phillips’s acquisitions, it was reflective of the kinds of paintings he sought. According to Susan Behrends Frank, associate curator for research at the museum, “the photographs in ‘American Moments’ emphasize qualities that Phillips always championed: the artist’s personal vision and the universality of the human condition.” 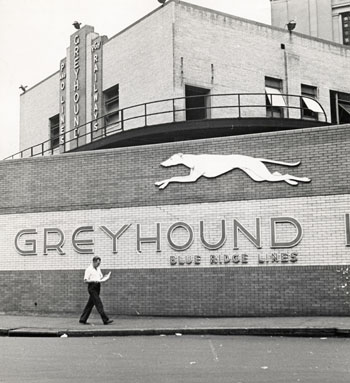 Those qualities are on stark, stunning display in “American Moments,” which showcases the medium’s transcendence as a literary visual art form. Sections such as “Framing the City,” “Labor,” “Scenes from the Road,” “Connection” and “Isolation” explore American lives and settings, from New York City to Northern Virginia. These photographs tell fragments of stories, similar to a verse of poetry or the hint of a sweeping novel.

Some big names are behind these stories: Berenice Abbott, Margaret Bourke‐White and Paul Strand, among others, documented the modernizing cityscape of New York City. Walker Evans and Life magazine contributor Alfred Eisenstaedt recorded the changing face of a postwar workforce. William Christenberry, the great painter of Southern decay, and William Eggleston, a fellow Southerner and color photography pioneer, are also here.

But a large bulk of the photographs — and the most direct definers of the American human condition as moments in narrative — come from Louis Faurer, Bruce Davidson and Esther Bubley. Faurer, who worked for splashy magazines like Harper’s Bazaar and Vogue by day, took electric pictures of Times Square at night, using sparse light and slightly blurry focus to convey the city’s nonstop energy.

Davidson, who produced compelling images of outsiders in his “Brooklyn Gang” series, resembles a novelist who happens to use f-stops and framing as his storytelling tools. The theme of alienation also appears in his series called “Separation,” which portrays the lives of the lonely in the 1940s, ’50s and ’60s, following in the footsteps of another literary photographer of American strangeness, Diane Arbus. Echoes of marginalization can be seen in Davidson’s portraits of a dwarf in a coffee shop and a woman in a kitchen with a Madonna, lace curtains and TV screens, as well as in Faurer’s scenes of a teenage dance party and circus performers. 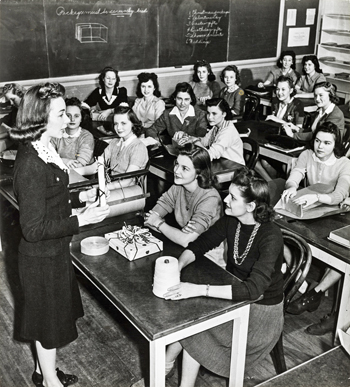 But it’s Bubley who surprises and amazes the most. Her photographs seem to tell stories seamlessly and effortlessly, springing from specific assignments that tap into a much broader, universal context.

Relatively unknown until recently, Bubley built a solid career out of photographing post-World War II middle-class America while traveling for Standard Oil, the Farm Security Administration Historical Section and Life magazine. Her assignments took her across the country, as she captured the everyday lives of farmers, suburbanites and urban dwellers.

We see through Bubley’s lens a classic main street scene in Andrews, Texas; North Carolina tobacco farmers waiting for a price call; a factory scene from the Hobbs District in New Mexico; a Greyhound bus terminal in Pittsburgh; young women “entertaining their guests” at a boarding house in Northern Virginia; and a focus on average working women often overlooked by a male-dominated industry.

Bubley. Who knew? The same could be said of Phillips’s fascination with photography and how the painting-centric museum that bears his name has taken that admiration to the next level. Its photography collection has doubled in size over the last five years, making photography the museum’s fastest-growing area of acquisition. “American Moments,” in fact, celebrates recent additions to that collection, which now stands at 1,000 works. Who knew?