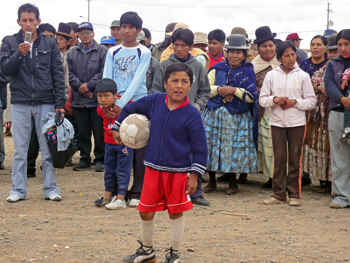 In the beautiful wood-paneled gallery of the Inter-American Development Bank Cultural Center, a photography exhibit titled “GOLS for Development” stands out in simplicity and profundity.

A child holds a soccer ball in Bolivia, where, as part of an IDB loan for re-urbanization, a sports center was built in El Alto.

Development initiatives in poor countries around the world typically bring to mind infrastructure projects such as schools, highways and bridges. But here, through a montage of oversize photographs plus two videos, a story emerges about another venue for development — sports as recreation and character building for children.

In particular the show focuses on soccer, i.e. football to everyone around the world but Americans, a pastime that has a tremendous impact on children and adults alike. One look at the face of any grown-up soccer fan glued to a match — whether in Spain, Qatar, Colombia, Britain, Egypt, Brazil or elsewhere — and the seriousness of the sport quickly sinks in. It can both unify — the Colombian rebel group FARC recently agreed to play in a match for peace — and divide — in Ireland and Egypt, political divisions have occasionally played out in the stadium, where riots have broken out.

But soccer can also offer children opportunities for success that might otherwise be lacking in their environment. The photos on display attest to that. They show that sports, especially soccer, can be a terrific influence on young minds, giving them a vision of the future filled with possibility and hope.

More than $15 million in grants has been financed for sports projects by the Inter-American Development Bank (IDB), mainly through the Multilateral Investment Fund, working hand in hand with public and private organizations such as the Nike Foundation, Clinton Foundation, USAID, Microsoft and PepsiCo.

According to the bank, an estimated 53 percent of young people ages 13 to 23 in Latin America and the Caribbean are currently not enrolled in school, and 16 percent of 15- to 24-year-olds are unemployed.

They also just bring happiness to many people’s lives, vividly captured here by photographers José Dias Herrera, Arlette Pedraglio and others. One picture shows boys joyously playing ball on a cobblestone street in El Alto, Bolivia. Unseen are the rehabilitated water and sewer systems improved by the IDB.

Another shot captures the sport’s camaraderie, as a group of Paraguayan boys stand with their arms around each other, thoroughly satisfied with the game they just played. Another depicts a Mexican girl participating in a workshop supported by NFL-Mexico and Gatorade that emphasizes gender and social inclusion. The barefoot girl, clad in a parochial school plaid skirt and clutching a football, is smiling as if this were the happiest moment of her young life.

Soccer is a sport that doesn’t require much — just a ball and some feet. In Valdivia, Chile, a group of children play soccer in a rural field using makeshift goals, surrounded by trailer-like shacks imbedded in the green hillside around the field. 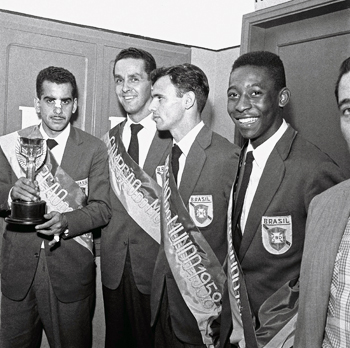 “In Latin America sports offers a ray of hope for millions of poor children,” reads the wall narrative. “Even if they have no talent or expectations of glory, sports are a way and a path to avoid violence, dodge drugs or delinquency.”

Sports undoubtedly can change lives, and the goal of efforts like the IDB’s is to give children the space and equipment they need to excel and realize their potential.

The poster child for the transformative power of sports is the world-famous Brazilian soccer player Pelé, who grew up poor and went on to become the “king of soccer.” His talent was nurtured and discovered early, and he joined Brazil’s professional leagues by the age of 14. From then until the rest of his life, he became a symbol of hope for impoverished children everywhere.

“There is not just one Pelé,” says the exhibition catalogue. “In Latin America and the Caribbean, millions of children are born into situations of vulnerability, and sports, perhaps a soccer ball, open a door to dreams of a better future, a life with dignity, a steady path to progress and help for loved ones.”

Beautiful photographs of Pelé abound. One stand-out, black-and-white photo from 1963 depicts Pelé clad all in white, hands casually on his hips, standing in the middle of a field facing four photographers in black trench coats snapping pictures of the superstar with their cameras. It’s a fabulous shot that is simple and elegant at once.

Other images reveal the football legend before he became a legend — though he retains that air of victory and confidence even in his younger days. In 1956, a 16-year-old Pelé is seen leaning against a chain-link fence, smiling broadly, wearing a Santos Futebol Clube shirt. He is the picture of kindness, happiness and accomplishment.

That exuberance is echoed in a 2010 color photograph of a little Haitian boy in a royal blue jersey grinning from ear to ear. He is training at the Foundation L’Athlétique d’Haiti, a sports center development project financed by the IDB. In another shot, Haitian boys play in a field flanked by makeshift tents set up after that country’s devastating earthquake.

“What is important,” said Soledad Guerra, office coordinator and communications senior analyst at the Cultural Center, “is the discipline and teamwork that come with sports. These are all the things, the attributes, that make you a valuable person.”

And the value of sport is clear in these inspiring images. You should make time to swing by the gallery to catch it. You’ll walk out energized and uplifted.