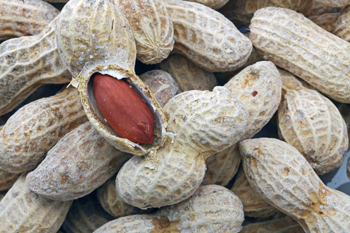 Last week was my daughter’s 8th birthday. As is tradition, I brought treats to her second-grade class — brownies we made at home and cookies from a local bakery. I chose the bakery carefully because three kids in the class have nut allergies. This place makes a fantastic cookie with M&M-like candies called Skippers, from a nut-free bakery in Vermont started by the mother of a boy with a peanut allergy.

Each of the three kids with an allergy, though, decided they’d go with either one of our homemade brownies, or an item out of their own boxes of pre-approved treats from home, sent in ahead of time for just such an occasion. These kids know their allergies well, and they know that even plain M&Ms are made in the same factory as the peanut kind. Even with many assurances that these were not the same candies, and totally nut free, they were not taking any chances.

That’s the life of a child with a nut allergy today. Coming to birthday parties and play dates with EpiPens, sitting at the “nut-free” table in the cafeteria, and worrying about whether or not his friend’s mom, who assures him that this treat really and truly contains no nut products, can be trusted.

They’re not just being paranoid. There has been a fair amount of public skepticism about “all these allergies that weren’t around when I was a kid,” but children don’t die from hypochondria or a need for attention. Last summer, a 13-year-old Sacramento girl named Natalie Giorgi accidentally took just a bite of a Rice Krispies treat at a summer camp — a version that had been prepared with peanut butter. Even though she spit it out and got both a dose of Benadryl and an EpiPen injection, Claire died at a hospital several hours later.

Between 150 and 200 deaths each year in the United States are attributed to food allergies; almost all of these (80 percent to 90 percent) are linked to peanuts and tree nuts, pediatric allergy specialist Dr. Robert Wood of the Johns Hopkins Children’s Center in Baltimore, Md., told USA Today in 2012.

According to the nonprofit Food Allergy Research and Education (FARE), the number of children living with a peanut allergy appears to have tripled between 1997 and 2008, with no clear explanation as to why. (Other allergies in children increased dramatically during the same period as well, but the pace of the increase in peanut allergies vastly outstripped other food allergies.)

Given all of this, new research published in the Lancet in January has to be both exciting and frightening for the parents of kids with peanut allergies. A group of British scientists, based at Cambridge University and other hospitals, found that exposing peanut-allergic kids to gradually increasing (but still extremely small) doses of a finely ground peanut protein powder helped most of them develop a moderate tolerance to the allergen.

Starting with just two milligrams of the powder mixed in with their food, and finally building up to a daily dose of 800 mg, 24 of the 39 kids (62 percent) in the study were eventually able to tolerate eating the equivalent of about 10 peanuts; 88 percent could tolerate about five peanuts’ worth. While it doesn’t mean that they could start taking a peanut butter-jelly sandwich to school for lunch, five peanuts is probably more than a child would be likely to eat by accident. Being able to tolerate 10 peanuts could have saved Natalie Giorgi’s life.

“The families involved in this study say that it has changed their lives dramatically,” study leader Dr. Andrew Clark, of Cambridge University Hospitals, said in a statement.

But I say frightening as well as exciting, because as promising as the study sounds, the prospect of exposing your child to something so potentially deadly to them — even in a controlled medical setting — has to be terrifying. And even if your child is one of the ones who develops a tolerance to the nuts (a tolerance that, so far, must be maintained with regular doses of the powder for well over a year), how long would it take for you to relax your vigilance even an inch?

And I’d imagine that “allergy parents” might be anxious for another reason. Writing about this study makes me more than a little nervous. I’ve heard about a few situations in which skeptical family members of a child with a peanut allergy try to convince the kid’s parents that the allergy is all in their heads, and that all they need is “a little exposure” to “get over it.” I hope that the publicity about this research doesn’t convince such skeptics to try their own experimental “at-home version” of the study.

Nevertheless, the immunotherapy approach is promising. Other research suggests that building tolerance through exposure can even start in the womb. A study published last December in JAMA Pediatrics showed that the children of mothers who ate more nuts during their pregnancies were less likely to develop a peanut allergy.

For those children who already have nut allergies, immunotherapy isn’t likely to be ready for regular clinical practice for some time yet, and absolutely should not be tried outside a controlled research setting. But the possibility of a treatment that could reduce the chances of a child dying from taking the wrong bite at the wrong time is good news indeed.