Home The Washington Diplomat March 2014 ‘Workt by Hand’ Weaves Together Overlooked Side of U.S. History 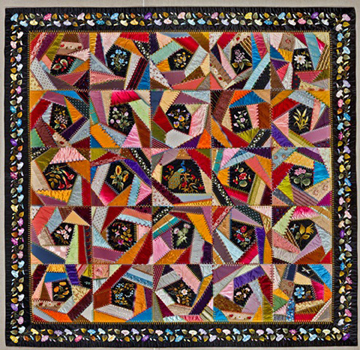 The National Museum of Women in the Arts features 35 colorful quilts to shed light on women’s contributions to U.S. history, including Mary A. Stinson’s “Crazy Quilt.”

President’s Day last month sparked the usual interest in the history of two of America’s most iconic leaders, George Washington and Abraham Lincoln, both of whose birthdays are in February.

But America’s history was built not only on the backs of men.

Women’s contributions often take a backseat in the history books — and in the art world. One contribution in particular, quilts, are often dismissed as women’s work or simple crafts rather than significant pieces of art.

“Workt by Hand: Hidden Labor and Historical Quilts” at the National Museum of Women in the Arts aims to shatter some of these preconceptions, while giving quilting its historical due.

“Quilt making was among the most significant forms of artistic production historically available to women,” said Susan Fisher Sterling, director of the museum.

The creative staging of 35 colorful quilts — all handmade between the 18th and 20th centuries — as paintings on the wall, as works-in-progress on a loom, and as bedspreads weave a complex story of American history.

Evoking the time period in which they were made, the museum walls are also papered and decorated with period oil paintings, as well as sepia and black-and-white photographs.

The term “workt” in the exhibition title is an archaic spelling of “worked” and was commonly used in historical quilting literature, indicating the distinctive and personal nature of an object produced by a skilled craftsperson, according to exhibit materials. “Hidden labor” refers to the considerable energy that went into making quilts — labor that was often undervalued compared to the artwork of men.

Quilts required not only skill, but also resources. Contrary to the myth of the industrious pioneer woman using scraps of materials, “evidence shows that quilts surviving from the early 1700s were made from expensive fabrics and that the women who made them had time on their hands — that is they probably had servants or slaves,” said Virginia Treanor, associate curator at the museum and liaison curator for the exhibit.

“The presumption is that most 19th-century quilts came from the hands of women in upper-class white households, but it’s likely that slave labor was also used,” she added, noting that complementary photographs support this belief. 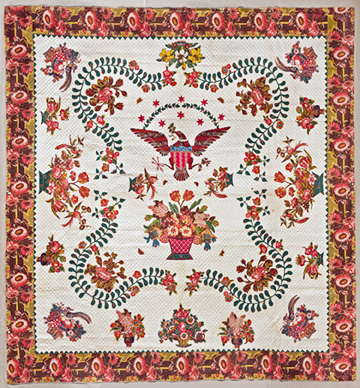 Betsey A. Canfield, born in 1794, made a white although now yellowed-with-age “Coverlet” from 1810 that’s beautifully spread across a bed frame in the exhibit. Quilting typically uses needle and threat to stitch together three layers of material: a top fabric layer, batting or soft insulation, and a bottom layer of fabric.

Canfield designed an elliptical medallion around a large basket of flowers. She inserted extra batting in the leaves and petals to create a bas-relief effect. The white fabric she chose as the top layer suggests this was a quilt for special occasions rather than everyday use — an example of a well-off household with multiple linens.

At first glance, “Pictorial Quilt” — the oldest quilt on display from here, from 1795 — is a bland sheet with spots of color. Yet peer closely and images will spring to life. Colorful couples in decorative outfits and varied poses of conversation are embedded in the design. A soldier in a long red dress coat asks a lady in a feathered hat to dance, while another graciously extends his arm for a walk. Extraordinary scenes from colonial life step out of history via this embroidered quilt.

The “Whole-Cloth Quilt” made in the 1830s is another window into the country’s colonial roots. It looks like a sheet of postage stamps because the quilt is actually composed of dozens of miniature portraits of the first seven U.S. presidents — George Washington, John Adams, Thomas Jefferson, James Madison, James Monroe, John Quincy Adams and Andrew Jackson, who was president when the quilt was made. Below their portraits is patriotic embroidery that says, “Magnanimous in Peace, Victorious in War.”

Welsh also made the “Medallion Quilt,” which features a large eagle bearing universal symbols of peace — flowers, leaf sprigs, arrows — in its beak and claw. Decorative birds and flowers cascading over the quilt are made by reverse-appliqué, a technique in which the top layer of fabric is cut in the shape of a flower, animal, person or some abstract form, resulting in the colored layers of fabric beneath showing the cut form. Exquisite precision and nimble hands were required to perform this technique.

“The reason these quilts still exist is because they were prized possessions and probably weren’t used very often,” said Treanor. “They’ve survived because they are masterpieces in their own right.” 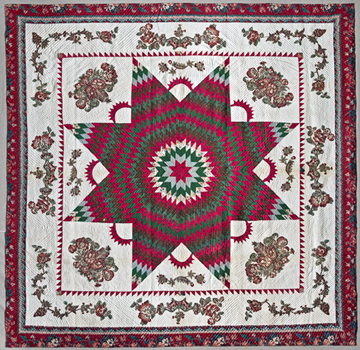 the “Star of Bethlehem Quilt”

Different patterns and artistic styles — from “Double Wedding Band” designs to the “Barn Raising” or “Log Cabin” style — are also explored. For example, Pennsylvania Amish women created quilts with a distinctly simple aesthetic because they eschewed patterns and vibrant color. “Bars Quilt” created around 1890 showcases this simplicity with blocks and broad stripes of dark brown, green and rust. It is surprisingly modern, like a Mark Rothko abstract painting.

“Clearly these women were artists even if they didn’t think of themselves as artists,” said Treanor. “The level of skill, expertise and time that went into their work is astonishing.”

A “Double Wedding Ring Quilt” from 1930 depicts interlocking circles made of small pieces of fabric. The bright pastels in pink, blue and minty green were colors available for first time after World War I, when Germany was forced to reveal its previously secret dye chemical formulas.

“Crazy Quilts,” made with affordable, vibrantly colored textiles, popped up at the height of the Industrial Revolution. Known for their bold designs, loud colors, and multiple geometric and organic-shaped decorative elements, their striking appearance has a contemporary appeal even though they were first made more than 100 years ago.

On such “Crazy Quilt,” made by Mary A. Stinson around 1880, is a masterpiece of embroidered silk floral design in the middle of each quilt block. The result is a garden bursting with flowers — sunflowers, thistles, strawberries, pansies and daisies.

Like Stinson’s floral panoply, this exhibit offers an abundance of art to praise and admire in its own right — a visual feast of pattern, color and design that evolved over time while also evoking a side of American history that tends to get short shrift.