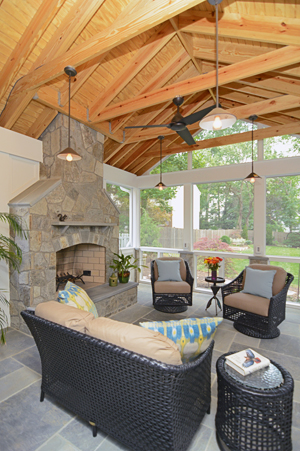 With temperatures this winter hitting record lows, most Washingtonians are eager to escape the polar vortex of 2014 and welcome spring, which officially starts this month. And with thoughts of milder weather come daydreams of sitting outside, admiring budding foliage and maybe even rolling out the grill.

An enclosed porch with fireplace by Case Design/Remodeling Inc.

Outdoor spaces such as patios, porches, decks and terraces used to be crucial parts of a house in the days of sleeping porches and no air conditioning, said James F. Rill, principal at Rill Architects in Bethesda, Md. They’re still essential in new ways.

“The hottest thing is connecting yourself to the outside and to nature,” Rill said. “We’ve done houses that are more exterior space than interior space.”

What form that connection takes can vary greatly based on personal preference, where a house sits and how much sun and breeze it gets. But the main focus is on creating an outdoor space that is comfortable.

“It’s like an outdoor family room,” Rill said. “It adds spatially because a porch [for example] can make the inside of the house feel bigger. It allows you another room that has another flavor.”

“Clients are more interested in outdoor space than they used to be, and what they’re interested in has changed a little bit,” Millholland said. “It used to be that people wanted a deck or a patio or a terrace. Now people seem to really like the idea of this great porch because it stretches the season a little bit.”

Porches have roofs that provide shade on 100-degree August days and where ceiling fans can be installed. They can also hold in heat from heat lamps on chilly October evenings.

To that end, fireplaces are also popular among Washingtonians.

“The outdoor fireplace, in the last five years, we’ve probably done 25, which is crazy — a lot,” Rill said. “When somebody sees one they say, ‘We want one.’”

To screen or not to screen a porch is up to the individual.

Rill isn’t as convinced, however. “It keeps the bugs out and that’s good, but it also keeps the dirt in. They tend to get dinged with animals, kids, husbands and they sit there looking ratty,” he said. “Screens are a lot easier to take care of when they’re not there. They can become maintenance problems.”

A porch may sound old-fashioned, but today’s designs are far from it.

“Your screened porch is different from your grandmother’s screened porch in that they’re really nicely outfitted, that they’ve got crown molding, and they’ve got detailing to them that might be consistent or it’s at least compatible with the existing house,” Millholland said. “It’s not all pressure-treated material and screens.

“They’re real extensions to the home,” he added. “These are great transition spaces. You go from a patio or terrace in the backyard, up some steps to a screened porch that is then connected to a family room or an eating area.” 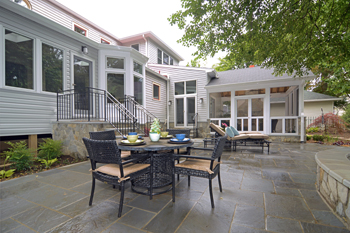 “You don’t have to rough it to be outside anymore,” says Bill Millholland, executive vice president at Case Design/ Remodeling in Bethesda, Md., which designs porches, patios and other outdoor spaces, such as the one pictured above.

Outdoor kitchens are the second most popular thing Rill’s clients ask him for. They don’t have the amenities of traditional kitchens, but they’re pretty close, comprising a grill, fridge, wine cooler and maybe a sink.

When it comes to design elements, more natural looks are in, although homeowners don’t always want to pay for real wood and stone. They turn instead to synthetic look-alikes, which can last longer and are lower maintenance, Millholland said.

“If you sit in a chair in the middle of your backyard, it’s kind of awkward, but if you sit in a gazebo, pergola, terrace, garden, it feels a lot more to scale,” Rill said. “When you stand out there and look back at the house, sometimes you realize you’re just standing against this two-story flat wall, and it becomes kind of intimidating or uncomfortable.”

He approaches outdoor projects by considering the whole lot.

“We’re going to look at everything you see as part of your ownership,” Rill said. “You own the views. You can’t affect them, but you want to think about where the sun comes up, how the wind blows, which way you’re facing.

“You don’t just design a home or an addition. You design a property,” he added. “You think about how the outdoor rooms flow into the indoor rooms and the wonderful feeling you’re going to get when you’re sitting outside.”

If the idea is to be more connected with nature, then adding structures is only part of a remodeling project. The other part is landscaping it.

“There has been a trend over the past at least decade I would say of people trying to bridge indoor and outdoor,” said Thomas L. Kapfer, landscape designer at Washington’s Ginkgo Gardens, which specializes in urban gardening. “I think a lot of people in their residential places are really trying to get a lot more out of their backyard and have nature to themselves.” 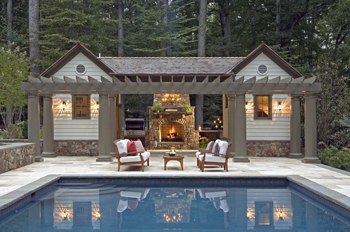 Washingtonians have moved away in recent years from wanting perfectly manicured landscapes — think shaped trees, for instance — and toward natural grasses mixed with low-maintenance plants.

“Even in an urban sphere — which normally you think of as very defined with shapes and geometry and the spaces are pretty small, and you don’t think of it as kind of more wild — I would say now even in smaller urban spaces people have an affinity for more natural and wild-looking landscapes,” Kapfer said.

“A lot of people are thinking about vertical gardening, making use of walls and trellising and espalier systems,” Hammond said. “A lot of people are going into urban farming. In that sense, you can use your walls to espalier fruit trees and edibles while also growing food in your garden.”

Espalier is the practice of controlling plant growth by pruning and tying branches to a frame so they grow into a flat plane, such as against a wall or trellis.

As for what to plant, the Washington area is lucky, Kapfer said. Our middle ground between the North and South means things that do well in both regions will do well here.

“Probably more than a lot of other areas in the United States, we get a huge range of plants that we can grow,” he said. “For the most part, we can grow just about anything you want.”

One favorite of the area is Virginia sweetspire shrubs, which flower in early summer, have fall color and keep their leaves well into the winter. “That can be a standout in the garden,” Kapfer said.

They also use a lot of oakleaf hydrangea because it’s sturdy, requires no maintenance and has flowers all summer. For evergreens, they plant holly, boxwoods, various junipers, wax myrtle and bayberry.

Prices can range from a few hundred dollars for a consultation to about $20,000, which is typical of Capitol Hill-area clients, Kapfer said.

“Right now a lot of people are going for more quality in the landscape rather than quantity,” he said. “I’d say 10 years ago people were being more flashy…. Now people don’t necessarily want the extravagance. They like it a little bit more restrained, a little bit simpler.” 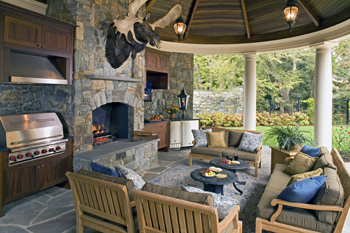 Rill Architects in Bethesda, Md., designed this backyard gazebo with a fireplace and kitchen overlooking the pool.

Prices can vary widely from about $10,000 to add a trellis to hundreds of thousands of dollars for fireplaces, outdoor kitchens and terraces.

“These projects are usually not the huge returns on investments,” he said. “Porches, decks, patios, terraces, outdoor spaces are going to return something certainly and make the house more sellable, but I don’t know that you’re going to get dollar for dollar in the short term as an investment.”

“A space which extends the living area on a seasonal basis, such as a deck or a screened-in porch, enhances a home’s marketability,” she said. “Over time, outdoor space may inspire a potential buyer with ideas to expand the home by enclosing the patio or deck. Generally, well-designed expansions and additions increase a home’s value and market appeal in many neighborhoods.”

Before you hire an architect or landscaper, do some homework, the experts said. Visit the U.S. Botanic Garden for plant ideas, Hammond said. Go online to Houzz.com and browse magazines or ride around neighborhoods such as Dumbarton Oaks to get inspiration, Rill said.

If possible, let hardscapers (who handle the nonliving components of a backyard, such as concrete, brick and stone) and landscapers collaborate, Hammond added.

“It does help to do more of the hardscaping first,” he said. “The hardscaping can often [expose] the bones of the space and then you can soften things up. Sometimes we come in after the fact and they leave no planting space. We want to emphasize that you want to blend the two together so they work well together.”

The bottom line? Washingtonians love their natural spaces, but they love their comfort, too.

“You don’t have to rough it to be outside anymore,” Millholland said.