Home The Washington Diplomat September 2010 Hagel May Have Left Senate Behind, But Not His Candor About Politics 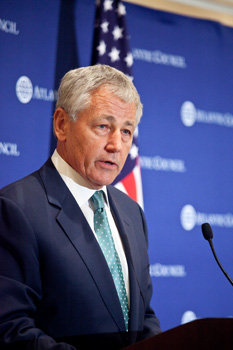 During two terms in the U.S. Senate, Chuck Hagel earned a reputation for candor. Whether warning about the dangers of invading Iraq or questioning the political priorities of fellow Republicans, the plainspoken Nebraskan called it like he saw it — often to the deep dismay of American conservatives.

Today, nearly two years after making good on his pledge to retire after two Senate terms and deciding against a presidential run, Hagel is still challenging conventional wisdom in Washington. But unlike his final two years in the Senate, where he was marginalized within his own political party, Hagel seems to be doing just fine outside the congressional arena. He remains an important power player and influential Republican who is respected by many Democrats and moderates — which means that his political future is still very wide open.

Hagel has kept himself in the Beltway loop since leaving the Senate. As co-chairman of President Obama’s Intelligence Advisory Board, he maintains an important connection to the White House. As chairman of the Atlantic Council, he has a perch to project ideas to Washington’s intellectual elite. As a member of the Pentagon’s Defense Policy Board and the energy secretary’s Blue Ribbon Commission on America’s Nuclear Future, he continues to advise on key policy matters. And as a professor at the Georgetown University School of Foreign Service, Hagel has the ability to mold the minds of the nation’s next leading diplomats.

During an expansive 90-minute interview in his modest office at Georgetown, the former senator said he’s adjusting well to life outside the world’s most prestigious club.

“It’s been a wonderful experience for me,” said Hagel, looking fit and relaxed in slacks and an open-collar dress shirt. “To have an opportunity to be associated with an institution like Georgetown and these bright young people who care about the future of the world — and to maybe contribute something based on my experience in life — it’s renewing and it’s refreshing.”

Hagel may find comfort in the ivory tower and prestigious think tank and presidential posts, but the decorated Vietnam veteran is still sore about the wars Iraq and Afghanistan. He’s deeply dismayed about the beleaguered state of the U.S. military, and he’s pretty much disgusted with the state of the Republican Party — and its potential candidates for president in 2012.

Hagel flatly rejects the notion — now conventional wisdom among many Americans — that the war in Iraq has been a success. “Did you see today’s paper?” he asked, holding up a front-page story in the Washington Post that described vast swaths of the country as being plagued by electricity outages.

“Look at the facts: No government, less electricity and people want us out,” Hagel pointed out. “Anyway you measure Iraq today I think you’re pretty hard pressed to find how people are better off than they were before we invaded. I think history is going to be very harsh in its judgment — very, very harsh. And I think we’re headed for a similar outcome in Afghanistan if we don’t do some things differently.”

He stands by his assessment, outlined in his 2008 book “America: Our Next Chapter,” that the invasion of Iraq is the worst American foreign policy blunder since Vietnam, and one of the five worst in U.S. history.

“We are where we are today — going into our 10th year in Afghanistan, our longest war — because we did take our eye of the ball,” he said. “It’s becoming clearer and clearer. We really made some big mistakes during that time. I have never believed you can go into any country and nation build, and unfortunately I think that’s what we’ve gotten ourselves bogged down in.

“You can dance around that issue any way you like, but the fact is that there are billions and billions of dollars we’ve spent and are still spending, over 100,000 troops, and all the assistance we’ve got going in there,” Hagel continued. “It’s nation building. We should not nation build. It will always end in disaster.”

He argues that the original aim of defeating the Taliban in Afghanistan — a group that the United States essentially “invented” during the Soviet-Afghan conflict in the 1970s — has morphed into something more complex. The U.S. is now building roads and schools, working to establish an Afghan government, and trying to negotiate peace among political factions that have been warring for centuries.

“We became completely disoriented from our original focus,” Hagel charged. “That problem in Afghanistan isn’t going to be solved with 100,000 American troops.”

It’s no surprise then that the former Senator believes it’s time for the United States to aggressively “unwind” in both Iraq and Afghanistan.

“We’re sinking down further and further into the bog,” he lamented. “We’re going to have to unwind this because politically it’s not sustainable in the United States.”

Leaning forward and tapping his desk for emphasis, Hagel also noted that the prevailing pubic discussion about Iraq and Afghanistan in America sidesteps a potentially scarier problem — a nuclear-armed and politically unstable Pakistan.

“It’s the most combustible area of the world,” Hagel, a former senior member of the Senate Foreign Relations Committee, explained. “You’ve got three nuclear powers [China, India and Pakistan] that all come together at the same border and on the other side you’ve got Afghanistan and Iran. The worst thing we can do is continue to stay bogged down in those areas where we continue to undermine our own objectives.”

Asked about Iran, Hagel said he agrees with Obama that talking to your enemies is not equivocal to weakness. Republicans have ridiculed Hagel for this diplomatic viewpoint.

“I’ve been called the senator from France and all this stuff,” he said with a dismissive wave of his hand. “But I’ve never thought that engagement was appeasement.

“I’ve always found that engagement is critically important to statecraft,” he added. “That doesn’t mean that engagement is giving things away or appeasement. Engagement is a long way away from negotiation. But it will allow you some time and give you some high ground, some optics, some support worldwide and a dimension to try to assess things from as close to the scene as you can.

“We say, ‘We’ll show you — we’re not going to talk to you. We’ll penalize you,'” he continued. “Well, it really doesn’t penalize anybody but us because we can’t make good judgments on just what we think. We have to engage.”

Yet as America’s collective attention fades from conflicts overseas and focuses on dire economic problems at home, Hagel predicted more pain for a U.S. military already stretched to the breaking point.

“The consequences of the blunder we made and the extenuation of the disaster in Afghanistan is going to play out in a number of ways that will affect our country,” he said. “Start with the Pentagon. Does anybody not think that these two wars have ground our people down? Our generals are saying it — record divorces, record suicides, not to mention the equipment — anyway you calibrate it. Quite frankly, I think there has been so much damage done to the infrastructure of our military and our force structure that it’s going to take a generation to build back.”

He pointedly added: “You can’t run people like machines — even machines break down.”

Speaking of breakdowns, Hagel said the Republican Party — of which he remains a member — is in the midst of a severe identity crisis, if not a total meltdown.

Hagel said he became a Republican standing on the edge of a rice paddy in the Mekong Delta during the Vietnam War when he voted for Richard Nixon for president, and followed that choice with Republican selections straight down the ticket. At the time, he said the Republican Party stood for fiscal conservatism and engagement with the world at large. Now, he’s not so sure what it stands for. That’s why he decided against running for president in 2012, even though some moderate Republicans — and more than a few Democrats — encouraged him to run.

“I was out of touch with the Republican Party,” Hagel told The Diplomat. “There was no way I could have run in a Republican primary and had any hope of representing the Republican Party. I wouldn’t disconnect from my beliefs. I would have been wasting the party’s time, voters’ time, my time — at least that’s what I thought a couple of years ago. The current leadership of the Republican Party is just not one I identify with.”

Rumors have swirled ever since Hagel left the Senate as to whether he would take a position in the Obama administration — Beltway chatter that continues today.

Speculating on who might be the next secretary of defense, Josh Rogin described Hagel — “always the bridesmaid” — as a possible candidate in his blog “The Cable” for Foreign Policy. “The Obama administration has been trying to give Hagel a prime posting for a while. He’s reported to have turned down several sweet offers, including ambassador to China and director of national intelligence,” Rogin wrote of his potential to serve as defense secretary. “In Hagel’s favor, he’s a Republican who won’t bend to the GOP talking points of the moment and he’s high-profile enough to fill the chair. The fear is that his independence and his penchant for veering off message in a Biden-esque way make him too risky to entrust with such a prominent perch. Moreover, if Obama chooses another Republican to lead DoD, many will begin to question whether the Democratic national-security bench is too thin or if Obama is wary of putting someone in his own party in charge of the wars.”

For now, however, Hagel remains an anti-abortion, pro-business, pro-gun Republican. Nevertheless, he makes no effort to hide his disdain for the current crop of potential presidential contenders, especially those (he’s looking at you Sarah Palin) whom he accuses of championing a dumbed-down, “Hee Haw” articulation of American values.

But Hagel has no plans to renounce his membership in the party and says he remains confident it can “come back to its senses.”

“The Republican Party will find a new center of gravity,” he predicted. “I think they’ll let this nonsense play out. It’s like a bad storm — it just has to go through.”

In the meantime, he’d like to see new ideas instead of predictable opposition among the conservative congressional ranks and think tanks.

“I don’t see them presenting any alternatives, any new options or any new thinking,” Hagel said. “If the Republicans get back in power, what are they going to do? There is no articulation. It’s just a ‘no no no, I’m against Obama because he’s a socialist and he’s taking America in the wrong direction.’ That’s certainly an opinion, but what about you, Mr. Republican? What would you do?”