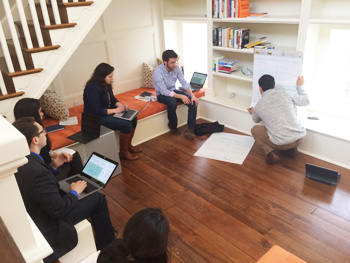 In the heart of Georgetown, the next great thinkers in social entrepreneurship are at work on innovative solutions to sustainability, health, social justice, language and literacy, to name just a few pressing global challenges. And they’re all working, eating, breathing and sleeping under the same roof — and a pretty nice roof at that.

The Halcyon Incubator, located in the 18th-century Halcyon House in Georgetown, is home to a group of social entrepreneur fellows who are working on innovative solutions to sustainability, health, social justice, literacy and other issues.

The Halcyon Incubator is located in the 18th-century Halcyon House, which was purchased in 2011 by Drs. Sachiko Kuno and Ryuji Ueno, the founders of the S&R Foundation.

The husband-and-wife biotech moguls from Japan burst onto the Washington radar by buying not one but two of the most expensive properties in the city: the historic Evermay mansion, purchased for a reported $22 million, followed shortly afterward by Halcyon House, which sold for $11 million.

Kuno and Ueno, an unassuming couple who made their fortune in pharmaceuticals, had for years been quiet supporters of the local arts scene, including the Washington National Opera, Smithsonian and other causes. In 2000, they established the S&R Foundation, a nonprofit that showcases artists and scientists and hosts various events, including a concert series with its resident Evermay Chamber ensemble.

Evermay Estate became the foundation’s headquarters, while Halcyon House underwent a multimillion-dollar renovation to serve as a home that nurtures young social innovators. The idea behind the Halcyon Incubator is to give a small group of fellows the time and space — including stipend and access to resources and mentors — to help their ventures make a real social change.

The foundation runs the incubator and welcomed its first cohort of entrepreneurial fellows last fall. Now just beginning its third cohort of fellows, the residential incubator has had time to refine its mission and expand its reach of applicants, all in an effort to diversify.

Each cohort of fellows spends five months living and working together on distinct projects, culminating in a pitch to investors. Following their residency, fellows continue to have access to tools such as reduced-rent workspace to help bring their ideas to the marketplace.

As the people behind this unique launch pad have discovered, the broader the range of interests, backgrounds and skills among the fellows, the better.

“We’re really trying to be mindful of diversity,” said S&R Chief Operating Officer Kate Goodall, who is one of the people responsible for selecting the fellows. “We’ve noticed that the more diverse our cohorts are in every aspect — field, age, gender, ethnicity, background — the stronger the cohort is. There’s less competition between them; there are different perspectives being shared.”

And the range of projects is indeed vast. As an umbrella term, “social entrepreneurship” encompasses virtually any business-oriented solution to a social problem: anything from an early-warning system for asthma attacks to a wedding registry platform for social good (projects from the first and most recent Halcyon cohorts, respectively). 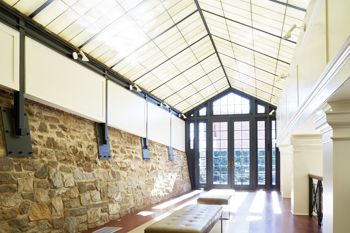 While some projects focus on the local, like Brian and Albert Ferguson’s website to help former inmates successfully reintegrate into society, others go global, like incoming fellow Daniel Yu’s platform that allows organizations in the developing world to track essential supplies through mobile phones. Fellows come into the incubator from academia, government, business, tech and a variety of other backgrounds. (For example, Brian Ferguson, a 4.0 GPA college student, served time for first-degree murder but had his conviction overturned and used the experience to reach out to other former inmates.)

Living together under one roof allows the fellows to use their life and career skills to inform one another’s projects. Fellows help each other write grants, build prototypes and exchange contacts, all while furthering their individual projects.

Twenty-three-year-old Amelia Friedman is one of the youngest fellows accepted at Halcyon House, where she spent her time working on the Student Language Exchange, which she started as a sophomore at Brown University to help students learn languages not offered in a traditional classroom. A member of the spring 2015 cohort, Friedman never felt that age was a factor; if anything, she valued the opportunity to learn from other fellows, some of whom had more experience than she did coming in.

“I feel very grateful to be doing this at such a young age when I have so much flexibility and absolutely no commitments of any kind,” Friedman said. “I also feel like it’s really a blessing to be in a place where you feel like there’s so much you can learn from every person in that building, and to try and pick up as much as you can while you’re there.”

The Student Language Exchange, piloted at Brown and now on numerous U.S. campuses, recruits international students to teach semester-long courses on their home cultures and languages, ranging from Bengali to Vietnamese. As Friedman explained, many international students arrive in the United States and are immediately told to assimilate — a process that can be disempowering. By becoming peer instructors and cultural ambassadors of sorts, these students are able to share their languages and cultures, rather than pretend they don’t exist.

Friedman’s project is one of several language- and literacy-focused initiatives that have matured at Halcyon House. David Dewane’s Librii venture, also part of the spring 2015 cohort, seeks to bring the public library model to Sub-Sahara Africa at a low cost. Librii is a revenue-generating nonprofit, which means that revenue gets directed toward the continued growth of the libraries.

“Libraries often have a very difficult time coming up with operation costs,” Dewane said. “The hypothesis that we’re running on is that if you can generate content, you can generate revenue.”

Indeed, several members of this spring’s cohort have projects based in Africa. Mariama Kabia spent her time at Halcyon House developing Memunatu Magazine, a classroom magazine that aims to promote literacy, leadership and empowerment among teenage girls in West Africa. One of the unique challenges Kabia sought to address while at Halcyon House was how to use Memunatu to help girls in Sierra Leone and Liberia — two of the magazine’s target countries, which were severely affected by the Ebola crisis — transition back to daily life. 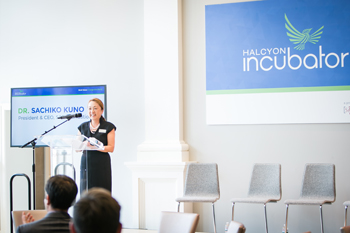 Meanwhile, Andrew Foote spent the last part of his Halcyon fellowship in East Africa, piloting his project in Naivasha, Kenya. For $7 per month, Sanivation provides in-home toilets, collects waste and turns that waste into affordable fuel, which it sells back to local customers in Kenya.

“We have a core belief that it’s really important to think about how what you’re doing integrates to the entire sanitation story,” said Foote, who has a dual degree in cultural anthropology and environmental engineering. “There’s still a lot unknown when you think about human waste as a resource. What are its calorific values? What are its properties?”

Foote, Dewane, Kabia and Friedman are just four of the spring cohort’s 11 fellows; another 11 are beginning their fellowships this fall. The selection process is competitive: The incubator receives hundreds of applications from all over the world and narrows those down to approximately 30, which are reviewed by a selection committee. From those 30, the top 16 go on to a pitch phase.

“Any one of the top 16 has written a really amazing plan for a project and proven that they understand the problem they’re trying to solve,” Goodall said. “At that point, we’re really looking for that je ne sais quoi component that you can only understand when you’re looking at someone’s face and can see how they respond to questions.”

In the three application cycles thus far, Halcyon House has made a concerted effort to increase the number of female applicants. Women are often outnumbered by men in the technology and business fields, a disparity that was reflected in Halcyon’s first two cohorts, which had just two women each. After a push to boost those figures, S&R saw the rate of female applicants go up by 113 percent. The incoming class of cohorts is now 40 percent women. Kabia noted that she and the two other female fellows in her spring cohort have formed their own bond within the broader Halcyon support network.

“Female entrepreneurs have unique challenges that we may face that our male counterparts don’t,” said Kabia. “The challenges can range from the seemingly mundane — so, what do I wear when I pitch? — to the more complicated. Statistically, women, in terms of venture capital, receive less funding.”

The support system at Halcyon is key. Fellows access business resources and mentors in their fields, based on shared interests and personalities. Yet the network that develops within Halcyon House, as a result of sharing meals, late-night chats and a common goal, is something that the fellows feel is most helpful to the growth of their projects, and most unique to the residential experience. By eating, sleeping and breathing social entrepreneurship, the fellows realize their potential far faster than if they had to juggle a day job, pay rent and go at their projects alone.

“I joke that the project made more progress in the first week I was at Halcyon than it did in the last few years when I was working basically on my own,” Dewane said. “That’s somewhat hyperbole, but not really.”

Miranda Katz (@mirandakatz) is a contributing writer for The Washington Diplomat.