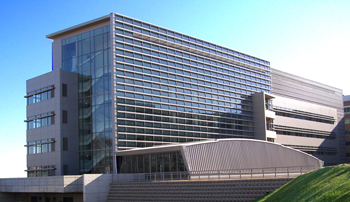 Innovative medical devices take significantly longer to gain approval from the U.S. Food and Drug Administration than do first-in-class drugs (i.e. the first of their kind), according to a new study from Harvard University — and these delays are primarily due to administrative hurdles, rather than unfamiliarity with the new devices, the study suggests.

Pioneer, first-generation medical devices in a particular category took 7.2 months longer to gain FDA approval (34 percent) than the first follow-on device, while most follow-on drugs take about 10 days (1.2 percent) longer to approve than the original drug in their class, the study found. This means that cutting-edge drugs are getting through the FDA red tape faster than groundbreaking medical devices are.

The Food and Drug Administration — whose Center for Devices and Radiological Health in Silver Spring, Md., is seen above — is embroiled in a debate over whether it is taking too long to grant manufacturers approval for new medical devices.

“It wasn’t, ‘Wow, we’ve never seen this kind of product’ that led to the longest delays. Rather, we observed many big regulatory delays for devices that are put in new product categories, but built-on technologies the FDA is already familiar with,” study author Ariel Dora Stern, an assistant professor at Harvard Business School, in a statement. “That suggests there is something more administrative in the delays — something in the classification process that matters.”

For example, implantable cardioverter-defibrillators (ICD) —the small devices surgically placed in the chest to help control potentially life-threatening disruptions of the heart’s electrical rhythms — were first approved by the FDA in 1983. Many ICDs have been approved by the FDA since then. Due to some modifications in the device, some of these have been reviewed under newer, different ICD product codes than earlier devices. Even though those ICDs are still quite similar to previous devices with which the FDA already had substantial technological familiarity, Stern found that they went through approval delays that resembled the timeframes for brand-new, innovator products.

Device manufacturers also find themselves stymied with little guidance from the FDA about what they need to provide in clinical trials for novel, potentially high-risk devices. “[F]or most devices, the evaluation criteria that the FDA will use to assess a new product are not made explicit before the regulatory process begins,” Stern said, noting that “the lack of specificity about what types of data to collect and present to regulators makes the regulatory process for devices far more uncertain than that of drugs.”

But other research has found that devices are less likely than drugs to have demonstrated clinical safety before they go to market. In a 2009 review published in the Journal of the American Medical Association, University of California-San Francisco cardiologist Dr. Rita Redberg and colleagues found that 65 percent of FDA pre-market approvals for cardiovascular devices were based on a single study. Only 33 of 123 studies used to support recent FDA approval of cardiovascular devices (that’s just 27 percent) were randomized and just 14 percent of them were blinded. Unrandomized, unblinded studies have significantly greater potential for bias.

Meanwhile, manufacturers have been slow to complete required post-market analyses on many devices, a new study in the Journal of the American Medical Association found. Out of 33 post-market clinical studies required by the FDA for more than two dozen high-risk medical devices introduced in 2010 and 2011, 27 had not been completed as of October 2014. Sometimes follow-up studies can take more than three to five years, but by then, “new” devices have often been replaced by the next generation.

In April, the FDA lifted some of its own bureaucratic hurdles, finalizing an expedited-access pathway for novel devices designed to address a previously unmet medical need. And in June, it announced that it would rank some 120 medical device classes as “low risk,” lowering the cost of bringing them to market and exempting them from lengthy pre-market regulatory review requirements. (These aren’t items like pacemakers or deep brain stimulators; they include devices like surgical lamps and drapes, assistive listening devices and umbilical cord clamps.)

It does appear that the approval process at the FDA is speeding up at least somewhat. EP Vantage, the biotech/pharma news service, recently found that the FDA had already cleared 26 devices using either a premarket approval or humanitarian device exemption, putting it on track to give the OK to more devices than any other year in the past decade.

So will the 21st Century Cures Act — legislation passed by the U.S. House of Representatives in July in a rather stunning 344-77 show of bipartisanship — clear up regulatory bottlenecks or remove needed consumer protections? That depends on whom you ask. Some say that the bill, which boosts funding for the FDA and the National Institutes of Health while also changing how the FDA regulates drugs and devices, will speed new treatments and therapies to patients who need them.

Others aren’t so sure. “The legislation, disingenuously titled the 21st Century Cures Act, would make it possible for companies that produce high-risk medical devices to submit evidence of safety and efficacy based on sources other than clinical trials, including case histories (i.e., the experience of individual patients),” warned Dr. Redberg and cardiologist Dr. Sanket Dhruva, a Robert Wood Johnson Clinical Scholar at Yale, in a recent New York Times editorial. “In other words, anecdotal evidence, rather than scientific studies, could be used to approve devices,” they said, noting that the bar for “breakthrough technologies” would also be lowered in the quest to speed up approval.

Other researchers, however, say the legislation is a much-needed update to help the FDA keep up with the fast-paced technological advances of medical devices.

“It typically takes 20 to 40 years or more for scientific discoveries to trickle down to benefit human lives in a meaningful way,” wrote Sandra Bond Chapman, founder and director of the Center for BrainHealth at the University of Texas, in a Hill editorial. “This is unacceptable.”

The lopsided vote in favor of the 21st Century Cures Act in the House doesn’t mean it’s assured smooth sailing in the Senate. That body isn’t set to take up the bill until sometime in the fall, when Congress will already be consumed by budgetary debates. Republican Sen. Lamar Alexander (R-Tenn.), who chairs the Senate Health, Education, Labor, and Pensions Committee, has said he hopes to have a bill in the Senate by Thanksgiving. There, the nearly $10 billion bill may hit serious resistance on the question of — what else? — funding. Stay tuned!