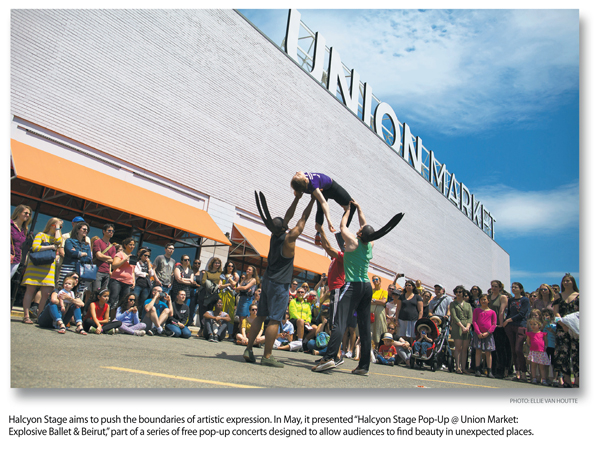 A nonprofit organization inside a magnificent, stately 18th-century home aims to be a “creativity well in the middle of Georgetown, just rippling out through D.C. and the world,” according to Halcyon co-founder and CEO Kate Goodall. And with former Washington Ballet Artistic Director Septime Webre on board as the curator and producer of Halcyon Stage, the group is well on its way to shaking up D.C.’s art scene.

Halcyon Stage — what Webre describes as “an interdisciplinary suite of public performances, intriguing conversations, immersive experiences and educational programs” — got its start this year with five months of shows running the gamut of cabaret to classical raves to pop-up concerts. The artistic series is a key part of the nonprofit group’s objective to “catalyze emerging creatives who are seeking a better world,” he said. Along with its stage series, Halcyon hosts residency programs for emerging social entrepreneurs through its Halcyon Incubator and for new artists focused on social change with its Halcyon Arts Lab (also see “Halcyon Incubator Hopes to Be Home to Next Great Idea” in the September 2015 issue of The Washington Diplomat).

The 18th-century Halcyon House was purchased in 2011 by Drs. Sachiko Kuno and Ryuji Ueno, the founders of the S&R Foundation. The husband-and-wife biotech moguls from Japan (who have since divorced) were longtime arts supporters who burst onto the Washington scene by buying not one but two of the most expensive properties in the city: the historic Evermay mansion, purchased for a reported $22 million, followed shortly afterward by Halcyon House, which sold for $11 million.

“All of what we’re doing is informed by making the world a better place. That’s a specific part of our mission,” Webre told The Washington Diplomat during a recent sit-down interview in the Georgetown mansion Halcyon calls home. “Most arts organizations are informed by the art form. Art has another aspect to it, a lens, and that lens is applied when I’m building a program that’s holistic. And what’s been fun for me is to try to do that in a way that’s not preachy.”

No one would accuse Webre of creating a lineup that’s preachy. From “Stravinsky Rave: The Rite of Spring Dance Party” in collaboration with The Experiential Orchestra; to a contemporary ballet set to the music of Amy Winehouse and indie band Beirut; to a chilling performance based on Edgar Allan Poe’s “The Fall of the House of Usher”; to a series of cabaret performances, Halcyon blasted onto the scene in 2017 with a set of thought-provoking and innovative programs.

“When we are producing work that is traditionally in a theater setting, we’re producing it in unorthodox ways,” he said. “It’s a little sexy and a little sassy and actually with a message.” 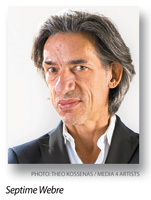 And the group has no plans to let up. There will be some programming this fall, followed by a mini-festival in February about creativity throughout Latin America. “We expect to have performances, food events and some dialogues, and we’ll be reaching out to some ambassadors and thinkers on Latin creativity who will be part of that process,” Webre said.

But the most significant part of Halcyon’s artistic future will come next summer, with a big festival launching in June. The goal is to create something akin to the Aspen Ideas Festival — and to make D.C. the “place to be at that moment,” according to Webre.

“We believe in a festival format. When you have things abutting each other from one night to the next, there’s a kind of logic to that juxtaposition. It’s how we live life. We live life with disparate experiences abutting each other from one moment to the next,” he said. “The festival will be, to some disagree, illustrative of and metaphorical of those chance and designed experiences that are both uptown and downtown, smart and pop, refined and a bit trashy — they’re all of those things.”

Halcyon, which also hosts residency programs for artists and social entrepreneurs, has big plans for D.C. Along with its investment in emerging creative types, “we also knew that we wanted the public to think about and be committed to creativity around us, and the way it changes the world in a good way,” Webre said. With that mission at the heart of the organization, it naturally led to the creation of Halcyon Stage, which aims “to foster a dialogue about the nature of creativity in the 21st century and to be more public about it,” he added. 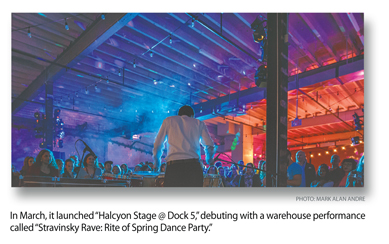 Webre, coming from 17 years helming the Washington Ballet, has another gig on top of curating Halcyon Stage: He’s the new artistic director of the Hong Kong Ballet. With his passport on standby, Webre says he is ready for the bi-continental life as he brings his artistic vision to two cities 8,000 miles apart.

“I have basically two gigs — my focus is Halcyon Stage’s artistic direction, and I’m going to moonlight as the Hong Kong Ballet artistic director,” he said with a laugh. “I will be bi-continental, and I’m looking forward to the upgrades at the airport lounge.”

From Halcyon Stage to the organization’s incubator for entrepreneurs to its residency for artists, Halcyon has laid the groundwork from its Georgetown mansion to try to fulfill its ambitious mission for D.C.

“It certainly seems that there’s a lot of artists who are trying to figure out how to stay here and have livelihoods here and not move to New York or L.A. At the same time, you’ve got this undercurrent here of facilitators and stakeholders who are coming to the realization they can be part of that process. That’s really where I think we have a bit of expertise — how do you create a healthy, thriving ecosystem?” Goodall said.

Halcyon, she said, can be a key part of making D.C. an “international arts city that isn’t just a stop between Miami and New York and that has its own identity.”

“I do think a portion of that is this mission-mindedness, that social impact piece. Certainly, that’s what D.C. brings to the table, and the levers you can pull by being here. And it’s also got these amazing assets other cities wouldn’t even dream of,” she said. “There are so many good things about this city, but it needs an infusion of the right kinds of energy and support, and I think that’s where Halcyon can certainly play a role.”