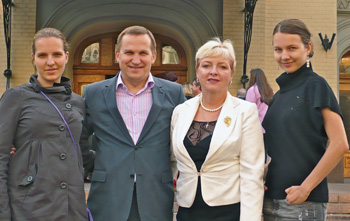 Before you even arrive at the Ukrainian Residence in the Northwest community of Foxhall Crescent, Nataliia Terletska has the food already on the table and a gift bag waiting with a colorful coffee table book on Ukraine, an elaborate shawl and an embroidered T-shirt.

“At home, we are always ready to entertain because family and friends call when they are close to the house, people stop by without much notice,” she said when I commended her on her warm hospitality. “It’s more casual, simple there.”

Terletska and her husband, Ukrainian Ambassador Olexander Motsyk, have been in Washington for three years and can often be seen at various functions around town. But it’s clear this diplomatic wife has a soft spot for hosting events herself as a way to showcase not only Ukraine’s hospitality, but its beloved traditions as well.

Nataliia Terletska and her husband, Ukrainian Ambassador Olexander Motsyk, are flanked by their two daughters, 31-year-old Tatiana and 29-year-old Olga.

“In Ukraine, the highest standard of entertaining is to cook yourself for your guests and family,” said Terletska. “That’s as good as it gets.”

She adds that “everyone cans and puts up fruit and vegetables. After all, we have been the breadbasket of Europe…. Our soil is very fertile.”

Here in D.C., Terletska said she’s always on the lookout for naturally grown fruits and vegetables, regularly shopping at Whole Foods Market in between her weekend trips to the Amish store or other organic farm markets.

“When you make something with your hands, you put part of your soul into what you make,” said Terletska, who not only loves to cook, but also embroiders, knits and is an avid arts and crafts enthusiast, making clothes and other gifts for her family and friends.

“As a young girl, I learned to embroider,” she recalled. “And then when our own two girls were small, I used to knit for them — sweaters, jackets, even coats, mittens and hats.”

Now her younger daughter knits for her, and Terletska said she feels a special connection to the clothes because they were made by her daughter’s hands. She also realizes why her own mother always wore, with pleasure, the clothes that Terletska had knitted for her.

“She had one jacket in particular that I made that she wore every time when she was taken to the hospital to be comforted with something her daughter had made for her,” she remembered.

Terletska’s latest handicraft passion is ribbon embroidery. She proudly displayed three framed examples containing yellow sunflowers and red poppies, both native to Ukraine, and her most recent work, a delicate bouquet of lilacs in various shades of purple.

“It’s so easy to get supplies here,” she said. “I go to Michaels [crafts store] and lots of other party places for beautiful ribbons and anything I need…. I learned about the ribbon knitting on the internet.”

Currently, she is making a gift for the newborn baby of her friends, who are Americans of Ukrainian descent. Along with crafts, she collects miniature shoes — made of glass, porcelain and metal — that line the mantel and other prominent places in her home. “I have more than 60,” she said, “from various countries and continents.”

Terletska grew up in the Ukrainian capital of Kiev, the daughter of an engineer and an economist. She got her master’s degree from the Odessa National Academy of Telecommunications and became an engineer like her father, following in his footsteps as a specialist in “electrical technical communications” in telephone, radio and TV. She worked for Ukraine’s national telecom company and its national radio company.

One nice perk for Ukrainian military and diplomatic personnel is that both they and their spouses can keep their positions if they leave the country for work. Hence, Terletska always returns to her job when her husband is transferred back home.

Though her expertise lies more with the technical aspects of radio and communications, Terletska has a flair for the dramatic — on stage that is.

“My father was a very good singer. He had an amazing voice and I learned many songs from him,” said Terletska. “As a schoolgirl, with the neighborhood kids we’d do programs in our backyard. We made the costumes and everyone would bring chairs from each apartment. We all knew each other…. Later in school, I was in amateur assembly where we helped organize concerts.” 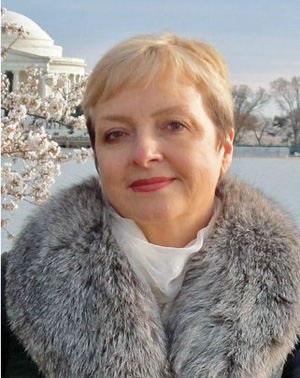 Today, Terletska uses her love of the theater and showmanship to jazz up the Ukrainian Embassy’s large holiday parties with plays and performances. “We make homemade costumes and even wigs,” she said. “My husband always encourages such events and watches them with pleasure; however, his schedule is too hectic to allow him to be in the show.”

Tetiana Shalkivska, press secretary at the Ukrainian Embassy, said she is impressed with all the work and creativity Natalia puts into embassy parties and holiday festivities. “She always performs too,” Shalkivska noted.

“It is really wonderful. She organizes everything for Christmas and other holidays, even celebrating International Women’s Day in March and International Men’s Day every February,” Shalkivska said.

Terletska is also active in organizing events that highlight Ukraine’s culture, history and modern life, both at the embassy and ambassador’s residence — a role she filled during her husband’s various other postings abroad.

Motsyk previously served as Ukraine’s ambassador to Poland from 2006 to 2010 and to Turkey from 1997 to 2001, as well as various positions with Ukraine’s permanent mission to the United Nations in New York in the early 1990s.

The couple met in college. Terletska’s cousin came to her home with a group of law students who were in their third year at the Taras Shevchenko National University of Kiev. Among them was Motsyk.

“I liked him right away, at first sight,” Terletska recalled. “He asked, ‘May I come by to see you?'”

During his first visit, he borrowed a book. For his second visit, he came by and returned the book. Finally, during the third visit, he invited Terletska to see a movie.

Today, the couple has two daughters, 31-year-old Tatiana and 29-year-old Olga. As an undergraduate, Olga studied the physics of space at the National University of Kiev. A rocket engineer, she is now the third generation in the family to study engineering, after her maternal grandfather and her mother who majored in math and physics. Currently, Olga is studying for her master’s in space technology at Delft University of Technology in the Netherlands.

Their older daughter Tatiana received her first master’s degree in international relations in Brussels and her second master’s in international journalism from the National University of Kiev. Currently, she serves at the Embassy of Ukraine in Indonesia as a press and cultural attaché. Prior to her diplomatic assignment, she worked in television with the English-speaking channel in Ukraine — on the opposite side of the camera from her mother.

Olga and Tatiana both have a long line of Ukrainians and Ukrainian-Americans that they can look up to — a few of which Terletska proudly rattled off during our interview. Among them, she praised American-Ukrainian astronaut Heidemarie Stefanyshyn-Piper, who grew up in Minnesota; Ukrainian astronaut Leonid Kadenyuk, who was part of NASA’s Columbia space mission in 1997; and Igor Sikorsky, an aviation pioneer in helicopters and fixed-wing aircraft who was born in Kiev. 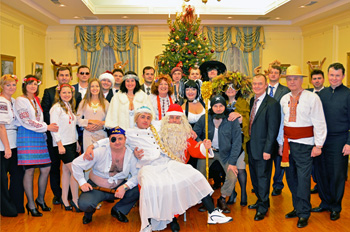 Nataliia Terletska, pictured center in a black wig, helps to organize holiday festivities and other performances at the Ukrainian Embassy.

Several entertainers are also on her list, starting with award-winning singer, songwriter, conductor and pianist Ruslana, who won the World Music Award and the Eurovision Song Contest in 2004. She also serves as a UNICEF goodwill ambassador for her home country and as a deputy in the Ukrainian Parliament.

She ended with professional boxer Vitali Klitschko, the reigning World Boxing Council champion. She also doesn’t forget to mention that the Ukrainian Embassy’s soccer team in Washington, D.C., has beat out nine other embassy teams in local tournaments.

Here in Washington, she is also proud of the historic building in which the embassy is housed. Located on the northern tip of Georgetown, just before the Key Bridge, the brick building known as the Forrest-Marbury House was built in 1788 and was the site of a dinner that George Washington held to establish the boundaries of the new capital.

Beyond the historic embassy building that’s an important site of American history, Terletska and her husband enjoy traveling throughout the United States and the Washington region, where one of their favorite spots is Mike’s crab house in Annapolis, Md. “I love hard-shell crabs,” she said with a great big smile.

She also appreciates the abundant greenery throughout D.C., saying that of all the places she has lived abroad, Washington is “the best place” for her.