Home The Washington Diplomat September 2013 Is There a Doctor In the Kitchen? 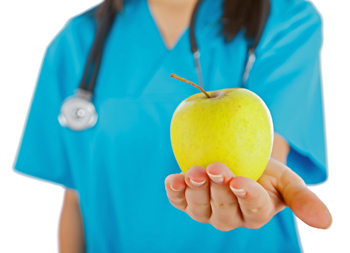 How much do you think your doctor knows about nutrition? Probably a lot less than you might imagine.

A 2010 study found that fewer medical schools than ever — just 25 percent — require that their students take a nutrition course. On average, medical students get less than 20 hours of nutrition instruction. Many doctors figure that this is the purview of dietitians and nutritionists. But since so many diseases can be traced, at least in part, to obesity and unhealthy eating habits, fledgling doctors need more practical knowledge about food and health, not less (also see “In Cancer’s Complex Journey, It’s Important to Start With Basics” in the August 2013 issue of The Washington Diplomat).

And one chef-turned-physician thinks he has just the prescription for a nutritional revolution in America’s medical schools.

When Dr. Timothy Harlan was practicing general medicine in rural Virginia, he counseled one patient after another about how to eat more healthily — and still enjoy delicious food. He knew what he was talking about: Before going to medical school, Harlan had owned and served as a chef in his own French bistro.

So he launched a website, DrGourmet.com, which has since become one of the web’s most successful healthy-eating sites. Today, more than 250,000 unique visitors a month come to the site for daily newsletters, recipes and Harlan’s blog.

One day, he started talking with a young patient in her 20s who had a body mass index of about 37. “She was otherwise pretty healthy, but she’s young. I told her, ‘This weight isn’t causing you any issues right now, but it’s going to, and you need to think about how you’re going to deal with it,” Harlan recalled.

He gave the patient simple handouts about diet and exercise, and she handed them right back. “She said, ‘No, you’re the guy, you know about this stuff. Tell me what to eat.’ It was the closest to an epiphany I’ve ever had in my life.” Harlan developed what he called his eatTHISdiet, which later became a successful book with a title inspired by his patient’s words: “Just Tell Me What to Eat!”

But Harlan figured one doctor, no matter how prolific, couldn’t change the way medicine deals with nutrition and food, or the way America eats.

After relocating to New Orleans in the wake of Hurricane Katrina, he joined the faculty at Tulane University School of Medicine, where he hoped to evangelize his message of healthy, delicious eating to a new generation of medical students. (Yes, even shrimp etouffee and crawfish pie can be good for you with a dose of Dr. Gourmet’s magic.)

Last September, Tulane launched its new Goldring Center for Culinary Medicine, in partnership with Johnson & Wales University, which features the first teaching kitchen ever in a U.S. medical school. The program also offers free community cooking classes. Ultimately, it will include a grocery store, open to the public, with a glass wall so that the shoppers can watch medical students and teachers at work.

“This is an entirely new approach in the training of both physicians and chefs,” Dr. Benjamin Sachs, senior vice president and dean of Tulane University School of Medicine, said last year when the center was announced. “Our goal is to change the way health practitioners think about food and the practice of medicine. With statistics showing that 65 percent of Americans are overweight and a third are obese, it’s not enough for doctors to know just the basics of nutrition. They must also learn to translate the science into practical lessons that empower their patients to lead healthier lives.”

All medical students are required to do a stint at the center, where they will learn cooking techniques, as well as the medical aspects of nutrition, from Johnson & Wales students. “We don’t want to just create a nutrition course,” Harlan told Tulane magazine. “Instead, we want to integrate nutrition into all of the curriculum: biochemistry, physiology, cell biology, etc.”

The center’s advisory board includes local New Orleans chefs and restaurateurs like John Besh, who owns several restaurants in the Crescent City and won the James Beard Award for Best Chef of the Southeast in 2006.

“The long-term goal will be to have medical students side by side with J&W students and local chefs, standing shoulder to shoulder teaching folks how easy it is to eat good food and be healthy,” Harlan told the Times-Picayune last year. “Our goal is to have people change the landscape and undo the myth that eating healthfully doesn’t taste great.”