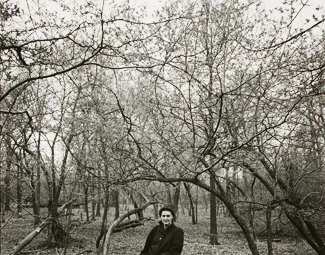 Harry Callahan (1912-99) turned his lens on what was right in front of him, photographing his family, neighborhood and travels, in images such as,
“Eleanor, Chicago” (1952).

Making your way through the “Harry Callahan at 100” exhibition at the National Gallery of Art is like walking through the neighborhood of a man’s life and work.

In a way, it’s like strolling through your own neighborhood, seeing the people and places that we normally sleepwalk through in broad daylight — whether it’s Chicago or Cape Cod.

But Harry Callahan (1912-99) paid attention to his surroundings, and redefined them with an inventive eye and soulful appreciation.

Seeing the results of that vision in the 100 or so mostly black-and-white photographs at the National Gallery celebrating the centenary of Callahan’s birth, you have to work a little hard to fully absorb the images because many of the photos are rather small. They look, in fact, like miniatures, fragile but with remarkable toughness in them, like the hardness of a haiku. You have to squint, peer over glasses, hands behind your back, or step back, but not too far. The photographs seem elusive — they demand that you stay close to digest their full weight, as if they might bolt like a deer.

That gets to the heart of Callahan’s skills — how he transformed people and places into bold, striking yet elegant compositions that played with light and dark, lines and form.

Born in Detroit, Callahan took pictures of what was right in front of him: where he lived, the things in the air, on the ground or just around the corner. He produced an urban panoply of life on the streets of Detroit and then Chicago, along with personal reflections of his wife Eleanor, the subject on which Callahan frequently refined his aesthetic and technical experimentation.

Interestingly, Callahan’s deftness shooting the nuances of cityscapes was matched by his ability to capture the vastness of nature, whether it was barren, lonely trees sprouting from a snowy landscape or the tranquility of an empty Cape Cod beach. Years later, he created images of his travels, when the world of color opened up to him and he would prove as versatile with colors as he was without. 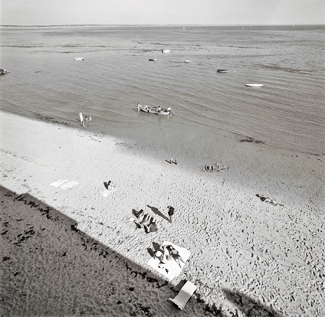 Callahan, who became a fine teacher himself, was self-taught and spilled into photography like a beachcomber on a lucky day when he simply decided that he was going to be a photographer. He approached the medium with a stubborn mien that he would do it his way, by way of his eyes and what he saw.

He began to take photographs in 1938 with a remarkable clarity — there isn’t a single spot or shadow or idea missing from his photographs. A telling fact: Callahan saw Ansel Adams’s black-and-white works and loved them, but not for any snow-capped peaks or majestic grandeur. He liked close-ups, the small things. Richard Lacayo of Time magazine captured what you might call the essence of what he was about when he wrote that Callahan “made pictures the size of an intuition.”

Callahan focused on the minutiae as exquisitely as he did the expansive backdrops. Take for example his many images of tiny figures dwarfed by the enormous surroundings threatening to engulf them, whether it’s a stretch of sandy beach or the window of a large room, though his subjects always manage to hold their own in the artistic tug of war.

From the beginning, Callahan thought of himself as an artist and was never put off by his lack of training. He was among a generation of talents to be sure: Dorothea Lange, Berenice Abbott, Walker Evans and the great Alfred Stieglitz. Callahan admired and took what he could from them, but he was nothing like any of them. He was raw and naïve and dogged, with a penchant for abstractions at times and double negatives at other times, the sure signs of a budding artist.

The examples of his innovative spirit abound, though they’re not always his best work. It’s the more modest ideas that leave an imprint: the look of tree bark, or leaves crumpled up, or a crack in the sidewalk, or the lines of a skyscraper that all echo the black-and-white elegance of Joan Miró, for instance — the kind of results that come from paying attention and loving patterns and details. 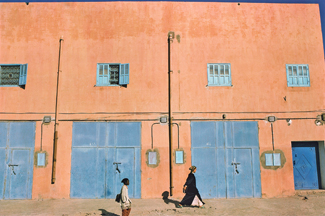 It is this intimacy that provides an adoring jolt to Callahan’s work. His views of urban streets, houses and storefronts can be stark, bare yet stunning. His photographs of his wife Eleanor and later his daughter Barbara, separate and apart, are inspired and consumed by his eyes first, then his gushing heart.

That’s not to say these photographs are sentimental. They’re natural, as if the formality he sometimes pours into his studies gets crushed like a milk carton in the summer. He forgets everything and makes pictures of not so much his wife, but of his own feelings. There are unadorned nudes intended not to expose his wife’s body, or even to glorify it, but to show it — and not to the world, but to himself.

Eleanor can be seen at a distance, rising out of the ocean, or just a bare back obscuring what’s in front of her. In these black-and-white photos with their contrasting light and darkness, there’s a warmth that washes over the lack of colors and makes them glow. The images seem spontaneous because they’re informed by his feelings, not just his technique.

But Callahan had plenty of technique and talent during his nearly six-decade career. He exposed the everyday in meticulous fashion, turning the simple into the sublime — no small feat.

through March 4
National Gallery of Art
on the National Mall between 3rd and 9th Streets at Constitution Avenue, NW
For more information, please call (202) 737-4215 or visit www.nga.gov.