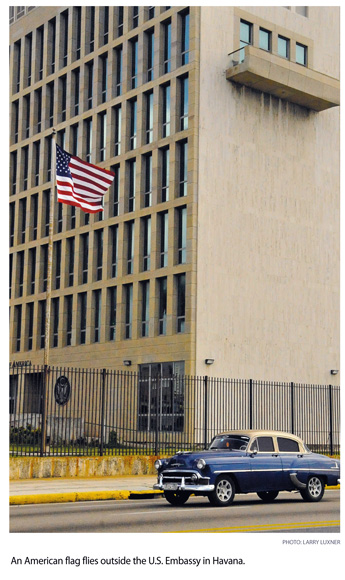 HAVANA — Even before news broke that the State Department had expelled two Cuban diplomats from the United States earlier this year following a bizarre “sonic attack” that reportedly sickened at least 16 Americans working at the U.S. Embassy and a Canadian colleague, relations between Washington and Havana had already soured.

In late June, President Trump announced with great fanfare in Miami that he would roll back what he called the Obama administration’s “one-sided” opening to Cuba — a move widely expected to hurt Cuba’s economy in the long run while depriving nascent private businesses, especially in Havana, of an increasingly lucrative source of income: U.S. visitors.

Even so, Trump didn’t break the diplomatic relations that President Obama restored after 55 years of hostility. Bilateral agreements on issues such as drug trafficking remain in place. Direct commercial flights continue to link Miami and other U.S. gateway cities to Havana, Santiago de Cuba, Camagüey and Holguín. In addition, cruise ships will be allowed to keep bringing American passengers to Cuba.

Yet individual “people-to-people” travel to the island is to be prohibited, meaning P2P trips will only be allowed as part of licensed tour groups — and rules that previously worked on an honor system under Obama will now be more strictly enforced. Some analysts say that could have a devastating effect on privately run casas particulares (bed and breakfasts that welcomed individual tourists but don’t have the capacity to accommodate larger tour groups), forcing visitors to go to state-run hotels. Yet others question how much of an impact Trump’s policies will really have on this communist country only 90 miles off the tip of Florida, which is still under a sweeping U.S. trade embargo that only Congress, not the president, can lift.

“I think it’s more bark than bite. He really didn’t reverse or cancel everything,” said Carlos Alzugaray, Cuba’s former ambassador to the European Union and a frequent commentator on U.S.-Cuban affairs. “Not a single agreement signed between the two governments has been repudiated by Trump. He has not reversed policies on Cuban-American travel or remittances. He has not really done a complete reversal on Obama’s policies on travel to Cuba, although it’s obvious he’s not facilitating things.”

Alzugaray spoke to The Washington Diplomat from Havana’s Meliá Cohiba, a luxury hotel fronting the waterfront Malecón esplanade — about a five-minute taxi ride from the U.S. Embassy, which also looks out over the Strait of Florida. Further along the Malecón is Old Havana, a major tourist destination, as well as an aging cruise ship dock that now receives a growing variety of vessels ranging from the MSC Opera to Royal Caribbean’s Empress of the Seas. 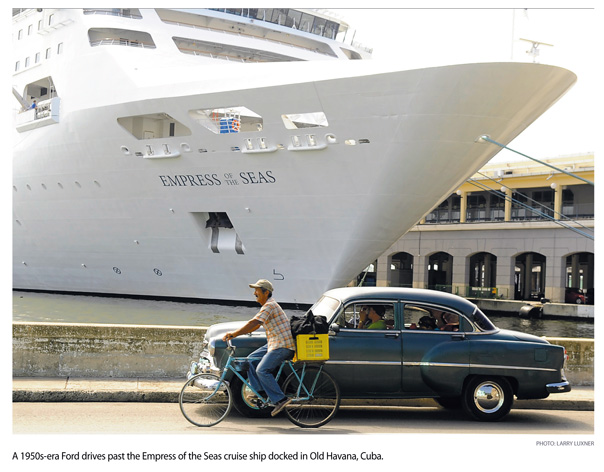 The very idea of cruise ships disgorging hundreds of camera-toting Americans onto the crowded streets of colonial Havana would have been unthinkable even five years ago, when U.S. travel to Cuba was severely limited and embassies in each other’s capital cities were nonexistent.

The dramatic change came on Dec. 17, 2014, when Obama announced he and Cuban President Raúl Castro would restore diplomatic relations, even with the U.S. embargo still in effect. The following year, the Cuban Interests Section in Washington was upgraded to an embassy, as was the U.S. Interests Section in Havana; until then, Switzerland had officially handled consular affairs. And in March 2016, Obama spent three days in Havana as the first sitting U.S. president to visit Cuba in 88 years.

Trump has no intentions to warm up to Cuba any time soon. He had little choice but to keep his campaign pledge to a relatively small but powerful bloc of anti-Castro Cuban Americans in Florida who argued that the economic opening would only reward and enrich the Castro regime while doing little to improve human rights or life for average Cubans.

The two countries’ fledgling bilateral ties took a turn for the worse in August, when the State Department announced it had expelled two Cuban diplomats from Washington after a series of unexplained incidents on the island that apparently left U.S. officials with potentially permanent hearing loss and mild brain injury. Published reports indicate that investigators believe sonic devices that produce non-audible sound were placed in or near the homes of U.S. Embassy officials with the intent of deafening them. Why Cuba would launch such an attack, especially in light of Obama’s rapprochement, remains a mystery. Other theories suggest eavesdropping technology may have gone awry or the devices might have been installed by a third country such as Russia. 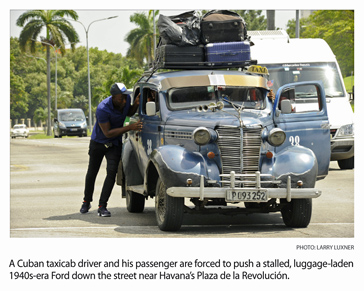 Cuba adamantly denies it has anything to do with the injuries, although it hasn’t been shy about its disdain for Trump. After Trump’s speech rolling back Obama’s outreach, reaction in Havana was swift. Cuban Foreign Minister Bruno Rodríguez called it a “grotesque spectacle” and warned that his country “will never negotiate under pressure or under threat.”

José Miguel Vivanco, executive director of Human Rights Watch’s Americas division, is certainly no apologist for the Castro regime. But he says Trump’s approach from the very beginning has been just plain dumb.

“Reversing the Obama administration’s changes regarding Cuba policy is not going to improve respect for human rights on the island,” Vivanco said. “The unilateral sanctions imposed by Washington for more than half a century have been a total failure. To expect different results by going back to a policy that has not resulted in any serious significant improvement of human rights and democracy is ludicrous.”

Giora Israel is senior vice president for port and destination development at Carnival Corp., which in May 2016 became the first U.S. company since the 1959 revolution to offer passenger cruises to Cuba. He said nothing has changed since Trump’s tightening of restrictions, at least in his own industry.

“When then-candidate Trump was running for the presidency, he mentioned several times that if he became president, he’d want to reverse or cancel some of the regulations of the Obama administration,” said Israel. “It is now very clear that air as well as cruise travel will not be impacted.

“We feel comfortable that cruising can and will continue, and we look forward to the inaugural sailing of Carnival’s Paradise,” Israel added. “Later in the fall, Holland America will also go to Cuba. All the products we are selling are in strict adherence to the letter and spirit of what people-to-people travel is.”

Meanwhile, says Alzugaray, “the hardliners here in Cuba are more than happy to have Trump and not Hillary in the White House. Obama made them uncomfortable because he was a ‘good imperialist.’ For them, it’s better to have a clearly bad imperialist.”

Alzugaray, 74, served at Cuban diplomatic missions in Addis Ababa, Brussels and Montreal before becoming an independent political analyst and a self-described “old wise guy.” He insisted Cuba won’t dump its socialist system under pressure from Washington — regardless of what Trump threatens or does. 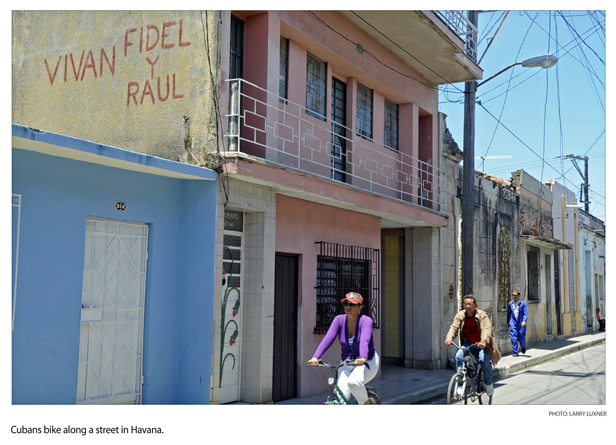 “What’s up for grabs is the pace of reform. There is a struggle. Our economic situation is not very good, and it’s complicated by Venezuela,” he told us. “But Cuba is not going to change anything under pressure, or as part of a deal. Those things are our sovereign decision.”

But people whose livelihoods depend on tourism are clearly concerned.

“The U.S. has again put restrictions on travel, so we don’t know what’s going to happen,” said Orestes Larios, who runs an art gallery in downtown Camagüey, Cuba’s third-largest city. “Only groups can come, not independent travelers, so it’s going to be a lot more difficult now.”

Christopher Baker, a travel journalist, tour leader and Cuba expert, said that Trump’s new policies, which have not taken effect yet, actually cut both ways.

“Group travel operators should benefit, as the potential business siphoned off by independent travel this past year will no longer have that capacity,” he explained. “However, many companies will have to rethink their itineraries to avoid Gaviota hotels,” he added, referring to hotels belonging to Gaviota, an arm of GAESA, which is controlled by the Cuban Revolutionary Armed Forces.

“However, since individuals will no longer be permitted to travel outside a P2P group travel, for which all U.S. citizens qualify, trip operators will need to also fly groups in and out of Cuba together,” Baker noted. “But the overall effect will no doubt be a large reduction in the overall number of U.S. visitors, and airlines will scale back their service accordingly. Cruise companies should be unaffected, although they may need to tighten up their onshore programs to adhere to the P2P regulations.”

Rabbi Sunny Schnitzer of Maryland’s Bethesda Jewish Congregation has been to Cuba 17 times since his first humanitarian visit there in December 2003. In an ironic way, he says the new regulations will help him fill future group trips to Cuba because they prohibit individual travel by Americans to Cuba — unless they fit into one of the approved categories. 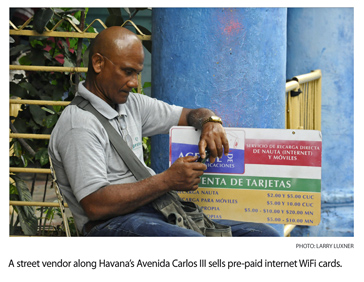 “That’s good for me, because it means more donations for the Jewish community since people have to go as a group,” said Schnitzer, president of the nonprofit Cuba America Jewish Mission. “The bad part is, if you’re taking a group of 20 or 30 people, you can’t stay in 16 different casas particulares. You have to stay in hotels, and that takes money from small businesses and the new Cuban middle-class economy. That was the whole idea, and that’s all shut down now.”

He added that Trump’s new travel policy won’t really hurt the Castro regime, because “GAESA, the military wing that runs all big hotels like the Nacional and the Presidente, is already spinning them off from military control to a separate agency.”

No one knows how long the embattled Trump will remain in office, or if and when the White House might again decide to shift course on its current Cuba policy.

“What I hope for is that it doesn’t last long, because the liberalized policy was good for Cubans,” said Schnitzer. “This only hurts the small people. The government still gets what they want and need. Most Cubans are poor, and this was a ray of hope.”

Larry Luxner is the Tel Aviv-based news editor of The Washington Diplomat and former publisher of CubaNews. He spent six days in Cuba on a reporting trip in early July.