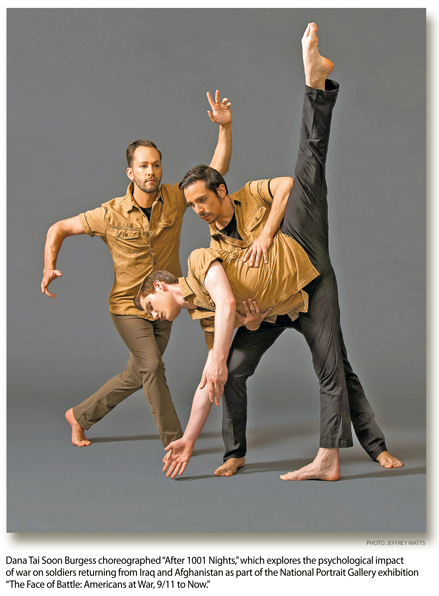 While most of us saunter through museum exhibitions, perhaps pausing at works of particular interest, Dana Tai Soon Burgess dances among art — literally. Juggling jobs as the Smithsonian’s first choreographer-in-residence at the National Portrait Gallery and as a State Department cultural ambassador, Burgess uses movement to tell stories from another, more animated perspective.

Recently, as part of the Portrait Gallery exhibition “The Face of Battle: Americans at War, 9/11 to Now,” Burgess created the dance “After 1001 Nights,” which explores the psychological impact of war on soldiers returning from Iraq and Afghanistan.

“Traditionally I think we see museums as kind of a ‘look at the artwork and step on, look at another piece and step forward,’” said Burgess, who founded the Dana Tai Soon Burgess Dance Company, the preeminent modern dance company in the D.C. region, 25 years ago. “There’s not this interactive quality and there isn’t a conversation that is inherently built into the tradition of artwork at a museum. What this allows is one more way for audiences to engage with the exhibition, to think about the exhibition, to see how another art form can be inspired by another art form.”

In short, dance gives the art a living element. And Burgess strives to incorporate as much real-life emotion and conflict into his works as possible. Before starting a new project, he conducts intensive research. For example, to create “After 1001 Nights,” which the company performed July 8, he consulted with curators in addition to social workers, psychologists and veterans of the Iraq and Afghan wars. The dance features a soldier looking back at his younger self and trying to come to grips with what he saw and did in war.

The choreography was informed by interviews Burgess conducted with veterans “who talked about everything from the boredom during long periods of waiting to the sounds of war to coming face to face with their own mortality,” Burgess recalled.

While he and his company of 10 dancers were creating the piece, they held open rehearsals alongside “The Face of Battle” exhibition, which is on view until Jan. 28. People came back each week to see how they were progressing, providing a look not only at the exhibit, but also at the choreographic process, Burgess explained.

The choreographer’s “laboratory is the dance studio, because when you’re in that studio experimenting with and creating phrases — just like a writer, a phrase becomes a sentence, a sentence becomes a paragraph, that’s how movement functions — we have to have very specific themes, variations, gestures that represent very specific references and characters so that people can recognize them,” Burgess said.

And that recognition is what makes dance an ideal cultural envoy, too. Since working with the State Department for more than 20 years on cultural exchanges, his company has performed, taught or lectured in 30 countries including Cambodia, China, Ecuador, Egypt, Germany, Israel, Jordan, South Korea, Latvia, Mexico, Pakistan and Venezuela. On average, they spend 10 to 14 days in each country.

Through these exchanges, he’s found that dance eliminates communication barriers. For instance, when the company did a lengthy residency in Alexandria and Cairo, Egypt, about 10 years ago, they were able to teach contemporary and modern dance classes without any issues, he said.

“Dance is a fundamental language,” said Burgess, who retired from the stage in 2006. “Even if the verbal language is different, we all acknowledge movement as a communicator, and all cultures dance and all dance for the same reasons, whether that’s to celebrate a sense of their own community, to celebrate a relationship with the divine, to celebrate stage performance or have social dances…. Those communicators are so universal that they’re really perfect for cultural exchanges.” 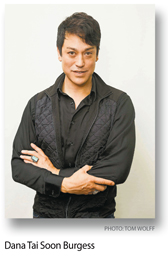 As the company celebrates its 25th anniversary, Burgess is proud of embracing common denominators across different cultures. “We have stories that all cultures engage with and live through. Those are stories of love, of doubt, of betrayal, of happiness,” he said. “We just have a few stories in humanity and they just keep getting retold over and over and over again in lots of different ways.”

Burgess, the son of an Irish-German-Scottish father and Korean-American mother, often examines issues of cultural “confluence,” identity, assimilation, acceptance and what it means to be a “hyphenated person” — someone who is of mixed ethnic or cultural heritage (also see “Moving Collaboration with the Dana Tai Soon Burgess Dance Company” in the April 2014 issue of The Diplomat).

When he founded the company, which had seven dancers at the time, his motivation was to “create dancers that reflect our American landscape, that tell the universal stories,” and this mission has not wavered. What’s changed is how the company has grown, Burgess said. “And with growth of an organization, what occurs is you can have a higher-quality level of production and design, of dancer, so I think that’s the difference.”

A native of Santa Fe, N.M., whose parents were visual artists, Burgess always knew he wanted to be involved in the creative process, likening choreography to a canvas and a dancer’s movement to brushstrokes. “It has always made sense to me to respond to visual art and portraiture through movement,” he said. “I feel really at home in a museum, almost more at home than in a dance studio.”

Burgess came to D.C. when he was dancing professionally on the East Coast, and the city’s own culture appealed to him. “I remember just taking days and days and days on end just walking through different exhibitions and museums and thinking, ‘Wow! This is just open to the public.’”

Catch the company on Dec. 7 and 10 performing a new dance based on the gallery’s “One Life: Sylvia Plath” exhibition, which reveals how Plath came of age as a writer in the 1950s and early 1960s. Burgess will also be at the Kennedy Center’s Terrace Theater on June 15 to 17, 2018, when the company performs a world premiere and dances from its 25-year repertoire. Additionally, he teaches dance classes at Glen Echo Park until the fall.