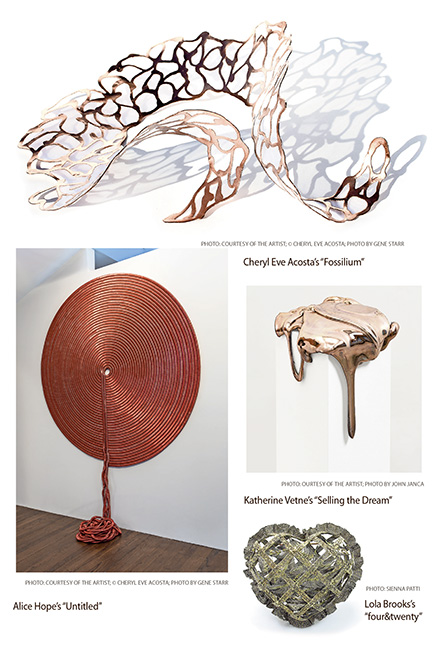 “Heavy Metal” at the National Museum of Women in the Arts (NMWA) has nothing to do with rock music but everything to do with shattering stereotypes that using metals to create art is the domain of men.

Women, in fact, have worked in the field of metalworking for centuries, as evidenced by the NMWA’s own collection of silverwork crafted by British and Irish women in the 18th and 19th centuries. But while large-scale bronze and steel sculptures created by men are frequently hailed as “fine” art, more subtle, delicate metal works, often fashioned by women, are described as “decorative” art, according to the museum.

The NMWA exhibit, the fifth installment of the museum’s ongoing “Women to Watch” series, seeks to dispel this archaic and patronizing cliché. “Heavy Metal” features contemporary female artists who work with a variety of metals and techniques, creating wall-size installations, breathtakingly beautiful jewelry and reinventions of objects that we see in our everyday lives.

The exhibit highlights over 50 pieces by 20 artists who work with materials like silver, cooper, bronze, pewter, aluminum and others.

Virginia Treanor, associate curator for the museum, curated the last “Women to Watch” exhibition in 2015 titled “Organic Matters.” She enjoyed the experience and decided three years later that she’d be up for the challenge again.

The women artists manipulate and fashion metals in sly, striking ways, such as incorporating discarded aluminum can tabs and ball chains into large-scale installations. Alice Hope does just that with her cylindrical weaving of red metal ropes that look otherworldly but are in fact made of Budweiser tabs. Paula Castillo goes more high-tech, using industrial byproducts to create sculptures whose form is first modeled using computer software and then welding together the individual components. Katherine Vetne’s “Selling the Dream” relies on three lead crystal Avon pitchers, melted and mirrored with silver nitrate, to create an undulating, dripping metallic glob that looks like it slithered straight out of a Hollywood sci-fi movie.

“My thinking in selecting metal as a theme really came from an appreciation for the fact that women have been working in metal for a long time, a lot longer than most people realize,” Treanor said. “Historically, metal work on a large scale was seen as very laborious and often associated with men. I hope that in 2018 this exhibit isn’t so much of a revelation to people.”

Certain artists in the exhibit play with these masculine tropes and gender stereotypes. Holly Laws uses ironing boards topped with copper and bronze to conjure an almost creepy effect. Wearable sculptures by Carolina Rieckhof Brommer examine the contradiction of home as a cozy haven and a prison of sorts.

Treanor mentioned how interesting it is to see what contemporary artists have done with similar materials that their 18th– and 19th-century peers once used.

While Treanor couldn’t name a specific favorite (they’re all like her children, she said), she did proudly describe the exhibit as amazing work by amazing women. “I think that the beauty in the exhibition lies in the variety of the work,” she added.

Some of the artists have a background in jewelry making, others in welding and smelting, and some in recycling everyday materials to create extraordinary amalgamations. All of the artists, however, capitalize on the different and sometimes opposing characteristics of metals – their sturdiness, their malleability, their practicality and their mysterious aura as both a molecular microcosm of our natural world and a macrocosm of the larger universe.

The overarching goal of the “Women to Watch” series is to highlight emerging or underrepresented artists, both in the U.S. and abroad. NMWA has outreach committees in different U.S. states and countries, mostly from Europe and South America. “Each artist represents one committee, Treanor noted. “This exhibit includes seven international artists.”

Even some of the artists residing in the U.S. have international origins. Caroline Sardi, who manipulated steel for her piece, is from Argentina. Leila Khoury lives and works in Ohio but her parents are from Syria. She plays on the durability of metals to reflect on the concept of memory as she creates industrial-looking works that serve as a personal and collective remembrance of places destroyed by the war in Syria.

As far as looking ahead to the next “Women to Watch” segment, Treanor said that committees are already assembling to organize it. They are hoping for the debut of the next exhibit in the series in 2020.