Home The Washington Diplomat December 2014 Hidden Hypothyroidism: Should You Be Screened? 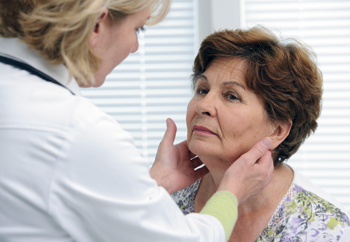 Editor’s Note: This story is the first in a two-part series on thyroid disorders. Next month’s issue will examine hyperthyroidism.

You’re tired. You’re draggy. You wrap yourself in blankets and wear socks to bed even though the thermostat is set to a comfy 70 degrees. You feel bloated and constipated. You’re not eating any differently but you’ve put on a few pounds. You’re constantly rubbing lotion into your dry, flaky skin.

These symptoms could be the signs of a million and one different disorders (well, maybe not quite that many), or maybe nothing at all in particular. But one condition they could be pointing to — one that’s often missed — is hypothyroidism.

When the thyroid, a major driver of the body’s metabolism, is not calibrated properly, it produces too much or too little of two important hormones, thyroxine, or T4, and triiodothyronine, or T3. In hypothyroidism, the thyroid is underactive and produces an inadequate supply of T3 and T4, slowing down your physical and mental functioning like a toy train running low on batteries. (In hyperthyroidism, the opposite happens and the body produces too much thyroid hormone, causing a host of different symptoms.)

It’s estimated that as much as 3 percent to 5 percent of the U.S. population has some form of hypothyroidism (hyperthyroidism is less common). It occurs in both men and women, although it’s more common among women, and the chance of developing hypothyroidism increases with age.

For a long time, hypothyroidism was an under-recognized problem, but that seems to be changing: Between 2006 and 2010, prescriptions for the generic thyroid hormone replacement drug levothyroxine rose by 42 percent, and in 2013, there were more than 23 million new prescriptions and refills for just one name-brand thyroid replacement drug.

Leading endocrine societies in the United States (those are the groups of doctors specializing in hormones and hormonal dysfunction) recommend routine thyroid screening for adults, although the specifics of their recommendations differ. The American Thyroid Association recommends that everyone receive thyroid testing starting at age 35, and every five years afterward. The American Association of Clinical Endocrinologists recommends routine screening in “older patients” — not specifying the age — with a particular emphasis on women. The American Academy of Family Physicians, although not specifically an endocrine group, recommends routine screening in patients older than 60.

But in October, the U.S. Preventive Services Task Force (USPSTF) once again declined to endorse routine thyroid screening for asymptomatic patients who aren’t pregnant, saying that there is insufficient evidence to make a recommendation for or against screening.

“People can have mild abnormalities in their thyroid tests and not have symptoms,” Dr. Kirsten Bibbins-Domingoco, co-chair of the task force’s recommendations, said in a statement. “We don’t know enough about the health consequences of finding these individuals and treating them. We need more research in this area.”

Because many people may have thyroid problems without knowing it, what’s the harm in a routine blood test every few years? Well, the USPSTF acknowledges that the studies to date don’t directly show any specific adverse effects from screening, but they say that indirect evidence “points to the likelihood of important and frequent harms associated with screening.” These are the typical potential problems that arise from screening tests, like false positives and overdiagnosis and overtreatment.

But on the other hand, undiagnosed and untreated thyroid disorders can have long-term health consequences. Over the years, untreated hypothyroidism can weaken muscles, including perhaps the most important muscle in your body, the heart. Hypothyroidism is associated with unhealthy cholesterol levels, high blood pressure and heart failure.

On the other other hand, however, the USPSTF notes that treatment of subclinical hypothyroidism — the kind with minimal symptoms, in which thyroid levels are only mildly abnormal, which is probably the kind most likely to be found by routine screening — doesn’t necessarily improve cardiac outcomes. They note that one trial seemed to show that treatment of subclinical hypothyroidism reduced heart disease and death, but that study didn’t adjust for other heart medications that patients might also have been on. 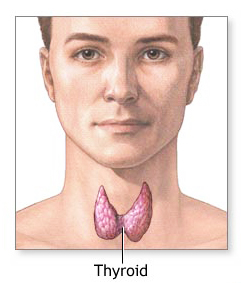 The thyroid, a butterfly-shaped gland in the neck, plays a major role in regulating the body’s metabolism.

The USPSTF, you might remember, are the same folks who got into a kerfuffle a few years back with the American Cancer Society and some prominent breast cancer groups when they upped the recommended age at which women should start getting mammogram screening from 40 to 50. Most cancer groups have ignored the changes and continue to recommend that women begin getting mammograms at 40.

And that’s probably what will happen with these new thyroid recommendations too. “We stand by our recommendation of liberal screening in older Americans, particularly females with nonspecific symptoms,” Dr. R. Mack Harrell, president of the American Association of Clinical Endocrinologists, told the medical reporting website MedPage Today.

So what does this mean for you? Should you have your thyroid levels tested? Obviously (or so we hope), you should be asking your doctor this question. If you have some of these symptoms, you may want to consider testing: chronic fatigue; difficulty concentrating; sensitivity to cold; muscle and joint pains; headaches; unexplained weight gain; constipation; dry skin; irregular periods, especially bleeding that is lighter or heavier than normal; and milky discharge from the breasts when not pregnant or nursing.

You’re at higher risk for hypothyroidism if you have certain autoimmune diseases, like Type 1 diabetes, lupus, anemia and rheumatoid arthritis. Polycystic ovarian syndrome, myasthenia gravis and Addison’s disease also put you at higher risk for hypothyroidism. Many medications also affect thyroid function, so if you’re on any medication for a chronic condition, talk to your doctor about its effects on your thyroid.

Finally, if hypothyroidism or other thyroid problems run in your family, or if you’ve had radiation to your neck for esophageal cancer or another type of cancer, that also ups your risk for thyroid problems.

The standard test for thyroid disorders is a blood test for thyroid stimulating hormone (TSH). But recent research indicates that the gold-standard TSH test may miss as many as 50 percent to 80 percent of people with hypothyroidism. The National Academy of Hypothyroidism recommends a more complete panel of tests, including TSH, free T4, free T3, reverse T3, and SHBG (sex hormone-binding globulin).