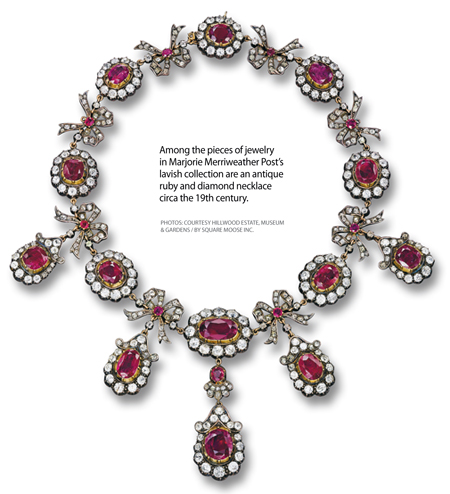 A decadent exhibition that revels in sparkle and shimmer showcases the impressive jewelry amassed by Marjorie Merriweather Post, the 20th-century cereal heiress and renowned art collector with a fascinating diplomatic connection.

Post’s third husband Joseph Davies served as U.S. ambassador to the Soviet Union during the late 1930s in the run-up to World War II, and her experience living there spurred her deep, passionate interest in collecting pre-revolutionary Russian art. “Spectacular Gems and Jewelry from the Merriweather Post Collection,” an exhibition highlighting her interest in and eye for jewelry, will be on display at Hillwood Estate, Museum and Gardens through Jan. 1, 2018.

While Post’s status as a collector of imperial Russian and 18th-century French art is widely celebrated, her position as one of the greatest jewelry collectors of the 20th century is less so. As a wealthy jewelry connoisseur, she acquired beautiful pieces of both historic importance and contemporary fashion. As the exhibition details, Post was not merely interested in sporting the latest baubles, but in assembling a collection of gems and jewelry with the same care she did art.

Post did not come back from Russia with as much jewelry as she did art, according to Kate Markert, Hillwood’s executive director, “but what she took was really notable.”

This exhibition takes jewelry as art seriously, and any skeptics will leave convinced of the same after studying the intricate, sparkling brooches, necklaces and diadems from Post’s stunning collection.

It also serves as an effort by Hillwood to reunite pieces from Post’s collection that were given away or sold over time with items that remain at the estate. The show displays 50 pieces of exquisite jewelry that were once owned by the heiress, and visitors are able to see how her famous eye for art translated into the jewelry realm with historic as well as commissioned pieces from some of the biggest 20th-century jewelry firms, including Cartier, Van Cleef & Arpels, Harry Winston and Verdura.

The curator for “Spectacular,” Liana Paredes, died in March after an illness and had long been working on this project, along with research into the gems and elaborate jewelry that Post once owned. This exhibition was Paredes’s “brainchild,” Markert noted, and it grew out of work connected to a major Cartier exhibition and her interest in jewelry that grew from then on.

“Despite the sumptuousness of Post’s jewelry, her collection conveys a thoughtful and nuanced message that goes beyond mere dazzle and glitz,” Paredes wrote in the exhibition’s accompanying publication. “In addition to being spectacular, Post’s collection is unique. Her vision was novel in that she saw jewelry not only as objects for personal adornment, but also as works of art worthy of display. She recognized the importance of jewelry in the world of artistic design and purposely retained many of her pieces for the public’s future enjoyment and access.” 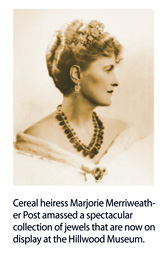 The section dedicated to historic jewelry is a particular delight. Visitors can see pieces with remarkable Russian connections, such as the ruby and diamond set of jewels that was reputedly made for the Duchess of Oldenburg, a daughter of Grand Duchess Maria Nikolaevna and the granddaughter of Tsar Nicholas I. Other highlights include the impressive diadem and diamond necklace given from Napoleon to his second wife, Marie Louise of Austria. The turquoise and diamond tiara, an early 19th-century piece, originally had emeralds, but they were taken out and repurposed. In the mid-20th century, Van Cleef & Arpels replaced them with turquoise. The jewelry firm then “cannily loaned it to Marjorie Post to wear” at a Red Cross Ball, Markert noted. Post later bought the piece and gave it to the Smithsonian.

And all of the tiaras in the historic section are “fabulous,” Markert said, pointing out an antique floral tiara from the 1830s with diamonds set “en tremblant.”

“If you look at it really closely, each one of those flowers has a little tiny spring behind it so they all shimmer independently of each other,” Markert said of the piece, which Davies gave to Post in the 1930s. “She loved it and she definitely wore it.” 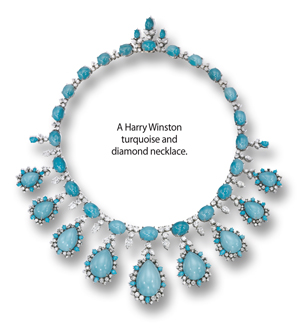 The exhibition also focuses on Post’s commissioning and collection of important pieces during the 20th century, and the breadth of her selections conveys her thoughtful approach to jewelry, Markert noted. In 1927, for instance, she was commissioning Cartier to make a brooch in the style of a piece of jewelry famous during the Louis XVI period — and yet she was not stuck in the past, as seen in a Cartier diamond and ruby bracelet she had from 1929 that is “pure deco,” Markert said.

“Spectacular” offers visitors a deep look into the interests of one of the 20th century’s most fascinating art collectors with an exhibition that celebrates the way history, personality and opulence can collide in a shimmering spectacle.


Spectacular Gems and Jewelry from the Merriweather Post Collection