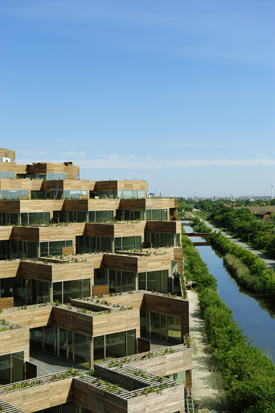 If you’ve been to Manhattan recently, you may have noticed a particularly unusual construction project on the corner of West 57th Street and 12th Avenue. Dubbed W57, it’s a combination of a skyscraper and a classic Copenhagen courtyard building. Its designer, Danish architecture firm Bjarke Ingels Group (BIG), calls it a “courtscraper” with a “miniature Central Park” in the center.

But its strangeness doesn’t even come close to some of BIG’s other projects, which include a residential complex where every unit has its own private swimming pool on the balcony and a flotilla of university dormitories that can be unlinked and hitched to a boat to float back home for the summer.

Architectural models of these and more than 60 other BIG projects are currently on display at the National Building Museum. “HOT TO COLD: an odyssey of architectural adaptation” organizes the models by the average temperature of their sites, from the deserts of the Middle East to the fjords of Greenland, to explore how the firm’s designs are shaped by the surrounding culture and climate. Organized with the support of the Embassy of Denmark and co-curated by BIG and the National Building Museum’s Susan Piedmont-Palladino, the exhibition has an unusual setup that suits both its subject matter and the museum’s striking architecture — models are suspended from the second-floor balconies of the Great Hall.

Upon entering the vast space, visitors are greeted by a whimsical model made entirely of LEGOs. The homage to the iconic Danish toy company comes complete with a wide diversity of LEGO people sitting on terraces — wizards, pirates and zombies among them. Upstairs, visitors make a complete tour around the balcony (“around the world in 800 feet”) to see the rest of the in-progress models — from the hottest climate to the coldest — before entering an exhibition space with more models, videos and interactive displays.

Learning about the designs with the sound of the courtyard fountain in the background and the sun streaming in through the upper windows, it’s hard not to become engrossed in the projects. “When I lead tours of the exhibition, we start on the south side of the building,” said Piedmont-Palladino. “By the time we get to the far corner, late in the afternoon, that part of the building [displaying projects from the Earth’s coldest regions] is in shadow and even feels chilly. It’s like a journey.”

Although the designs of the buildings themselves often look futuristic, certain practical trends emerge. “There’s a lot of exposed skin on the hot side,” observed Piedmont-Palladino. 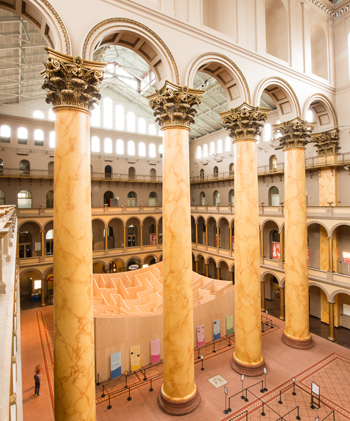 BIG has also tapped to create a big maze at the National Building Museum where 60 of the firm’s projects are now on display.

The buildings also get more huddled and closer to the ground the colder it gets. This isn’t just an aesthetic choice. BIG takes pride in using the local climate — and community — to shape its creations. For example, in a design for the headquarters of a Middle Eastern media company, BIG created a large courtyard shaded by a giant architectural canopy. BIG’s other “hot side” projects also focus on providing shade, taking into consideration the direction the building faces and tweaking the design to make it as energy efficient as possible.

Danish architect Bjarke Ingels founded the firm, which now has a major branch in New York, in 2005. According to the museum, he “coined the phrase ‘hedonistic sustainability’ to reflect his philosophy that environmentally responsible buildings and neighborhoods need not be defined by pain and sacrifice.”

Along with environmental considerations, BIG’s other major design influence is local culture. The canopy on the media company building was inspired by traditional shading techniques that the architects came across in local outdoor marketplaces, and the whole building is covered in abstract geometric shapes reminiscent of those used in Arab decorative arts. By letting local cultures and climates define its designs, BIG works for a more humanistic architecture, as opposed to a one-size-fits-all modernism. In the exhibition’s introduction, BIG writes that the role of architecture is to “choreograph the complex relationship among the natural and human-made, civic and private, individual and society…. Architecture is storytelling.”

One of Piedmont-Palladino’s favorite BIG projects, Copenhagen’s 8 House, is a prime example of architecture as storytelling. Completed in 2010, 8 House is a residential building that seeks to organically combine numerous aspects of an entire neighborhood into a single structure. It’s shaped like a giant figure eight and residential units of all kinds coexist with a café and sloping rooftop green spaces, all connected by a continuous walkway. 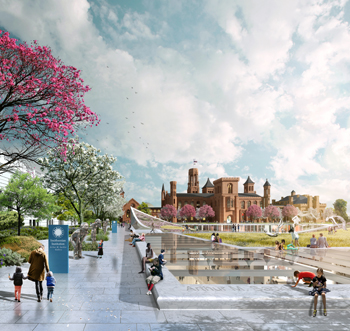 BIG has also been tapped to revitalize the south end of the National Mall in D.C.

“I got a chance to visit and it was a fantastic experience,” recalled Piedmont-Palladino. “It’s s full of life. People were riding their bikes, gardening, walking around with strollers. There was a sense of joyfulness all around. It speaks to the Danish culture of communal living and urbanity. I’d love to see something like that in D.C.”

A seemingly utopian residential building may not be coming here any time soon, but a BIG design was chosen last fall to revitalize the south end of the National Mall. The goal of the $2 billion refurbishment, which encompasses the Smithsonian Castle, Hirshhorn Museum, National Museum of African Art and Arthur M. Sackler Gallery, is to create a more open and friendlier public space. (Last summer, BIG was also tapped to create a giant maze at the Building Museum.)

Even BIG’s traditionally industrial projects have a human element. One of BIG’s most bizarre and innovative works (and Piedmont-Palladino’s other favorite) is a design for a waste-to-energy plant that doubles as a ski slope and climbing wall. And the LEGO building at the entrance of the exhibition? It’s real (or it will be soon). The goal was to design a new building for LEGO that could be theoretically constructed using only giant versions of its iconic bricks.

HOT TO COLD: an odyssey of architectural adaptation

Elena Goukassian is a freelance writer in Washington, D.C.