Home The Washington Diplomat May 2015 The Evolution of an Epidemic: Good News and Bad News on Ebola 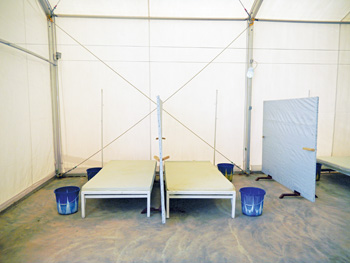 Partitioned rooms of an Ebola treatment unit were created to fight the viral hemorrhagic fever during Guinea’s 2014 Ebola outbreak.

It’s a classic good news-bad news story. The good news? The Ebola epidemic is waning rapidly. During the first full week in April, just 30 cases of the disease were reported in all of West Africa. Numbers ticked up slightly the following week, to 37, but these figures are still by far the lowest weekly numbers of new cases since early in the epidemic, which began last spring. Even a few weeks ago, weekly new case reports ranged from the 120s to the 150s.

In Liberia, there have been no new cases of Ebola diagnosed since March, and the last person confirmed to have Ebola in that country died on March 27. In Sierra Leone, schools reopened on April 14 for the first time since classes were suspended at the height of the outbreak eight months previously (in Liberia they had opened in February).

Treatment capacity now exceeds demand in both Liberia and Sierra Leone, so the World Health Organization has begun guiding these countries’ governments in slowly and safely shutting down surplus facilities, while keeping a few strategically located treatment centers operating. In addition, only about 100 American troops, out of an initial force of 3,000, remain in the region as part of the U.S. government’s $5.4 billion response to the crisis. The focus now shifts to helping survivors and rebuilding ravaged health care systems.

So where’s the bad news? This means that the researchers testing potential vaccines for the deadly disease, which has infected nearly 26,000 people and killed more than 10,000 — the vast majority in Guinea, Liberia and Sierra Leone — may not have enough patients to study. That in turn might hinder the response to a future epidemic, which is a constant fear in a region with porous borders and poor health services.

Two Ebola vaccines are currently in trials in West Africa: one developed at the National Institutes of Health and GlaxoSmithKline, and another developed by Canada’s public health agency and licensed to Merck and NewLink Genetics. The Merck vaccine, which had already undergone testing in Guinea, began trials in Sierra Leone in mid-April. The goal is to vaccinate 6,000 people in close contact with Ebola patients, especially front-line workers such as doctors, nurses, burial workers and others who are at greatest risk of developing and spreading the disease. 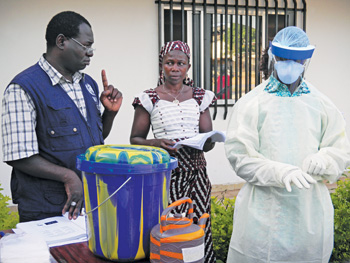 A World Health Organization staff member conducts a class on how to properly don personal protective equipment to a Guinean health-care worker during the Ebola crisis last year.

Participants will still be tested to see if they develop an immune response to the disease, but with so few new cases, it may be difficult to ascertain just how effective the vaccines are in real life.

Finding a successful vaccine strategy against Ebola remains an important priority — even though the current outbreak looks like it has, at last, been effectively contained and is finally burning itself out — because there will almost certainly be another outbreak, experts say.

This last outbreak was uniquely vicious. Previous Ebola outbreaks, all taken together (there have been 10, all in Africa), killed just under 1,600 people in total, according to the World Health Organization. That’s less than one-sixth of the 10,000-plus toll exacted by the latest epidemic. This naturally prompted the question of whether the virus had mutated in some new and deadly way.

But in a study published in the April issue of the journal Virology, British scientists who conducted a sophisticated computer analysis of all Ebola outbreaks since 1976 reported that the virus has undergone many genetic changes over time, but those changes haven’t made it any more or less deadly. “Unfortunately this does mean the Ebola virus that has now emerged on several occasions since the 1970s will very probably [mutate] again,” said professor Simon Lovell of the University of Manchester’s Faculty of Life Sciences.

On the positive side, these findings probably mean that — unlike the ever-mutating flu virus — vaccines developed to fight today’s Ebola, if they’re effective, will likely still work against an Ebola outbreak that crops up five years from now.

Study co-author David Robertson offered another optimistic conclusion. “It also means that methods to successfully tackle the virus should work again, so hopefully in the future an outbreak can be stopped from spreading at a much earlier stage.”

So hopefully the worst Ebola outbreak in human history will never lose that distinction.