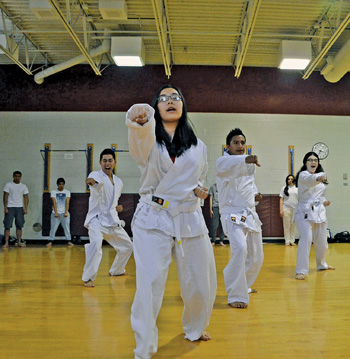 “Lead with your bellybutton, not with this,” Soolmaz Abooali says, holding a clenched fist in front of her as a group of 40 teenagers at J.E.B. Stuart High School in Falls Church, Va., mimics her.

Abooali is teaching traditional karate to the students at this high school named after a Civil War Confederate cavalry commander. But she’s not just teaching the 40 children here how to punch and kick the air and count in Japanese; she’s handing them key tools for peace-building and diplomacy.

Elizabeth Do, center front, completes an exercise with a heartfelt “osu” — a contraction of two Japanese words that roughly means to endure under pressure — during a peace-building karate class at Virginia’s J.E.B. Stuart High School.

And Iranian-born Abooali isn’t just a nine-time U.S. national champion in traditional karate and a fourth dan black belt; she’s also a Ph.D. candidate and graduate research assistant at the George Mason University’s School for Conflict Analysis and Resolution (S-CAR). She fled Iran with her parents shortly after the Islamic Revolution. Her father had been kicked out of university for his political activism and her mother, she says, is an educated and outspoken woman who was forever falling afoul of the mullahs. The family went first to Pakistan, then to Bangladesh and finally to Canada as refugees, before settling in the United States.

Abooali began doing traditional karate as a young girl in Canada and found it gave her the tools to cope with being an outsider, and to understand her unsettled past.

Years later, Abooali and her U.S. national teammate, Cassandra Haynes, came up with the idea of using the martial arts to teach youngsters the fine art of peace-building.

“Cassandra and I were talking about how traditional karate has impacted our lives and about some of the work I do with the State Department and nonprofits where I incorporate conflict-resolution skills into traditional karate training because I’ve seen parallels in them,” Abooali told The Washington Diplomat. “She was like, how about we try something at J.E.B. Stuart?” where Haynes teaches. The two women met with the school principal, who was very supportive, and in early 2014 launched a pilot program.

It was an instant success. At the start of this school year, the class was meeting twice a week at J.E.B. Stuart and was a recognized after-school club in Fairfax County. “We had 20 places and it filled up in a couple of days. We started a wait list and it kept growing. So we opened a bigger class,” Abooali said.

Part of the goal is to instill confidence and discipline in students who attend J.E.B. Stuart, which is home to one of the highest concentrations of poverty in Fairfax County and lags behind in graduation rates and SAT scores.

Half the students in the class wear the pristine white gi karate training uniform and a white belt neatly tied at the waist. The other half are dressed in their civvies. They’re the newcomers. The students wearing gi have been doing traditional karate and are surprisingly good at it after such a short time. It’s also had a surprisingly positive impact on them.

One student in the class, Terry Tran, wears a black belt. He’s been doing traditional karate since he was a young boy. Tran got his black belt when he was 10, but had to give up the sport because it took too much time to drive to lessons. Now, he can take it after school, two days a week. Tran says it has helped him.

“Sometimes I get really frustrated and it’s really hard to control myself, and I come to class and I feel much better afterward,” he said.

High school senior and karate class veteran Kevin Palomino introduces a new student to Haynes. The new boy doesn’t have any parents, Palomino explains. He lives with an aunt and needs a note from Haynes to say he is going to karate class. It’s to reassure his aunt that he isn’t running with a bad crowd, Palomino said.

“I think this class will help him,” Palomino told us. “I mean, he has no parents and only one guardian. He’ll learn English and become more disciplined and will be a leader in his class, like I am.”

Palomino said he has been doing traditional karate for a year, and he’s noticed a positive change in himself.

“I was just a kid who respected teachers and liked to talk to them but I’m more the leader in my classroom now, and more well behaved,” he said.

Salma Moutei’s family is originally from Morocco. (J.E.B. Stuart is said to be one of the most diverse high schools in the United States.) For her, “Karate is not about being aggressive. It’s more about peace, about being peaceful. Peace means no stress, having an empty mind. Or if someone pushes you to fight them, you don’t react,” she said.

Words like that are music to Abooali’s ears. The topic of her doctoral dissertation is sports as a peace-building tool, and to her, traditional karate is the ideal peacemaking sport. 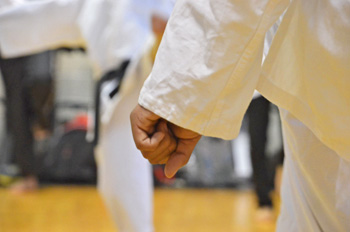 Black belt Terry Tran clenches his fist while his instructor, Soolmaz Abooali, kicks in the background.

First of all, she said, traditional karate is an individual activity.

Another thing about traditional karate that lends it so well to conflict resolution, according to Abooali, is the fact that, contrary to popular belief — at least among the uninitiated — it is a non-contact sport.

“We generate a full, powerful technique but we stop about an inch away from the other person’s skin and transfer the energy without really hitting. It takes a lot of control and a lot of awareness and emotional stability to be able to physically stop,” she said.

By exercising the self-control required in karate, a person becomes introspective, Abooali said. “It allows you to figure out, OK, what do I need to do? How am I feeling in this fast, explosive interaction with another person? How am I aware of my distance? How am I aware of the energy the other person is transmitting to me?”

Those are all thoughts that could be lifesaving and are certainly relevant to conflict resolution. “You’re in Afghanistan or Iraq and you’re feeling fear or uncertainty of the unknown. You have to be aware of distance, of how you’re feeling, of how your emotions are taking control of the situation or not. There are a lot of parallels with traditional karate,” Abooali said.

In the karate class, Abooali teaches the 40 teens techniques and draws parallels with conflict resolution. “The whole non-contact part of it — it’s not about aggression, not about how hard you can hit the other person. It’s really about how you exercise self-control and are aware of yourself when you’re standing so close to another person. That’s a whole other idea than how hard and fast you hit someone,” Abooali told the class.

Could a karate class help world leaders to think beyond themselves? Should John Kerry and his Iranian counterpart, Javad Zarif, do some traditional karate training before they head back into the Iran nuclear negotiations? Or what about South Sudanese President Salva Kiir and rebel chief Riek Machar?

“Leaders, because of the platform they have and influence they command, they are the ones who need the most to learn how to self-reflect, to acknowledge their own weaknesses through this physical form of training,” she said.

“I would love for leaders to train in karate. It’s beyond the whole ‘let’s sit in the classroom and learn this knowledge and internalize it at the intellectual level and then go out and do great work.’ The person hasn’t internalized it.”

The class executes another movement that makes one of the newcomer boys giggle. Abooali warns him: any more giggling, and the entire class will have to do 50 push-ups. For the rest of the class, no one loses focus.

Abooali’s karate class is only offered at J.E.B. Stuart, but another traditional karate class could do the trick, she said, as long as you keep the focus on what the sport is all about: leading with your head, not with clenched fists.