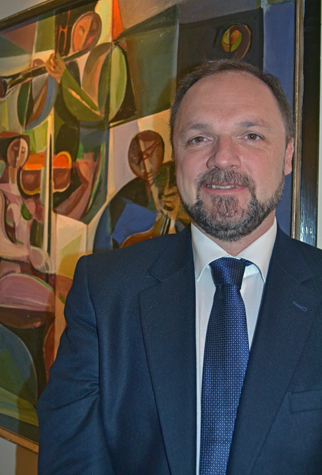 Réka Szemerkényi is Hungary’s first female ambassador to the U.S. while her husband, Szabolcs Ferencz, is vice president of corporate communications for the oil and gas company MOL Group.

Réka Szemerkényi is a European security and energy expert who has worked as national security advisor to the prime minister in addition to stints at the World Bank, think tanks, NGOs and Hungary’s main oil and gas company.

But it was her husband who gave her the nudge she needed to become Hungary’s first female envoy to the United States.

“I’m here as ambassador because of my husband,” said Szemerkényi, exchanging a big smile with Szabolcs Ferencz, who works as senior vice president of corporate affairs for the Hungarian oil and gas company MOL Group.

“I had had a terrible day at the office in Budapest,” Szemerkényi recalled. “At the very end of that day, I was asked to be Hungary’s ambassador to Washington. The whole drive home, I talked myself out of it.”

With two busy careers and four children, who now range in age from 7 to 15, she thought an ambassadorship might be too much. As soon as she got home and told her husband about the offer, however, Ferencz began planning for how they would pull it off, insisting that she take the high-level position. Szemerkényi had never served as an ambassador before and Hungary had never had a woman as its top diplomat in Washington.

Now, a year since Szemerkényi took up her post, everyone in the family makes it work. Ferencz splits his time between Budapest and Washington, commuting back and forth once a month, while the siblings look after each other. “We’ve had nannies before but this time when we started to look for one … the older children said they could take care of themselves and that they would take care of their little sister too,” Szemerkényi said.

For the big move to D.C., “the ladies took off first and the men stayed behind,” Ferencz said, explaining that their three daughters and their mother went to the U.S. while their oldest, Zsombor, who was in the second half of his eighth-grade year, remained in Budapest to finish school. Today, all of the children have settled in the U.S.: Zsombor attends Georgetown Prep, commuting by Metro for sports and late afternoon activities. Boroka, 13, and Hanga, 12, go to the Washington International School, while their youngest, Réka, named after her mother, is in first grade at Horace Mann Elementary. “The oldest is in charge. If I am here, I work 9 to 3 when they are in school,” Szemerkényi noted.

Meanwhile, Ferencz shuttles back and forth between the two capitals for his job at MOL Group, where he has worked for over a decade. “I spend 18 days in Washington and then go back to Budapest where everything awaits me,” he told us. “When I’m there, I work all the time — nights and weekends … usually about 16 hours a day.”

Ferencz previously worked as vice president of corporate communications for MOL Group and country chairman and CEO of its Romania branch. The Hungarian multinational oil and gas group, headquartered in Budapest, operates in 40 countries across Europe, the Middle East, Africa and Asia and boasts 28,000 employees.

In addition to jetting between Hungary and the U.S., Ferencz has now added the Middle East to his business travel portfolio. “Commuting between two different worlds, the Middle East and Hungary,” has been a challenge, Ferencz said, citing possible cultural misunderstandings and language barriers; Ferencz speaks German and Romanian in addition to Hungarian, but not Arabic or Farsi.

Nevertheless, he noted that, “Hungarians have a certain advantage. The Middle East holds hostility to the West and their origins are in the East. They regard us as cousins.” He added that Middle Eastern countries might be more willing “to take a diminished risk” with Hungary than with a corporation from Great Britain or the United States.

For his part, Ferencz is intimately familiar with the U.S., where he completed his post-graduate studies alongside his wife. Both were Fulbright scholars at the Johns Hopkins School of Advanced International Studies in the mid-1990s. “I was very much impressed and traveled around the country,” he said. 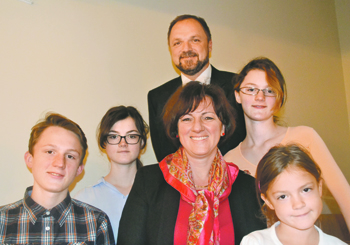 Réka Szemerkényi and her husband Szabolcs Ferencz are pictured with their four children, who range in age from 7 to 15.

During his current forays to D.C., Ferencz finds time to jog from the Hungarian Residence on 30th Street. “I love running up and down Massachusetts Avenue, on the Mall and around the White House.” The residence has a small pool but he gives that up to their children.

While he’s fond of American life, Ferencz, whose mother was an opera singer, said he loves Hungarian culture — “the quantity and the quality, evening concerts and theater.”

Before joining MOL Group in 2003, Ferencz worked in government and political communications. From 2000 to 2002, he was chef du cabinet for the Hungarian Ministry of National Cultural Heritage. In 1998, he worked directly for the prime minister as director of communications.

Ferencz, in fact, was born and raised in Romania but talks about his adopted homeland with pride. “Hungary is a great country. It is full of creative people, many inventors,” he told us, noting that Hungarians invented the Rubik’s Cube, ballpoint pen, the first electric motor and binoculars. “Budapest is the most beautiful city in Europe. It has a great history and beautiful buildings, especially the Parliament.”

While the historic city draws tourists from all over the world, recently Hungary has become more synonymous with the populist backlash against illegal immigration that is sweeping the continent. Last year, the government of fiery Prime Minister Viktor Orbán erected a controversial border fence and took other measures to keep out the tide of migrants and refugees who have fled war-torn countries such as Syria and Afghanistan for the safety of Europe’s shores.

Both Ferencz and Szemerkényi defend the measures their prime minister has taken to stem the flow of migrants into the country and say the criticism he has attracted in Western media is unwarranted (also see “Hungary’s New Envoy Tries to Set Record Straight About Her Boss” in the June 2015 issue).

“Hungarians for a very long time had a very good reputation. There have been misconceptions only in the last few years and those have been based on the Hungarian character,” Ferencz told us. “Hungarians are rebels; it is rooted in their nature. They have a rebellion and they are punished. Then, they have a rebellion again. It is not a coincidence that the country refused to accept the current wave of immigrants…. Hungarians always rebel.”

While Szemerkényi has spent much of her ambassadorship explaining Hungary’s anti-immigrant policies while Ferencz deals with energy issues back home, the couple keeps their professional and private lives separate by following two important rules. First, at home they do not discuss business, especially when they are with the family. Second, according to the ambassador, when someone walks up to one of them with a request, they ask that person to call their office and leave a message or ask for an appointment. “We’ve found that gives us more time for each other and our family.”