Home The Washington Diplomat February 2016 No Reservations: Is the Wait Worth It For In-Demand Hotspots? 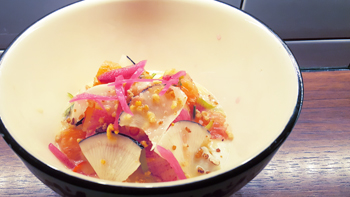 Patrons hoping to score a table at the nationally renowned Rose’s Luxury on Capitol Hill start lining up about mid-afternoon or earlier, even though the restaurant’s doors won’t open until 5 p.m. Show up after five and expect to wait in line, put your name on a list and then wait some more — sometimes for several hours.

Rose’s, as well as many other in-demand restaurants that don’t take reservations, estimates your seating time and promises to text when your table is ready. That leaves diners a choice: have a drink at the restaurant bar (if there is one), cool your heels at a neighboring bar, go home and wait or run an errand or two. The policy rankles some, but the restaurants say it gives more people a chance to dine without making a reservation that could take weeks to honor. It also puts more customers in the limited seats. We’ve been to Rose’s several times and generally feel the culinary payoff is worth the hassle.

This month we sampled two other restaurants exercising the no reservations policy. One of them — the inventive Thai spot Little Serow that opened on 17th Street in November 2011 — is a pioneer of the trend. The other — the modern Filipino Bad Saint in Columbia Heights — welcomed its first customers in late 2015.

We arrived at Bad Saint at 5:55 p.m. on a Sunday night, shortly after its opening time. The tiny restaurant’s 25 seats were already full and nine people waited in line ahead of us. The cheerful hostess took our name and telephone number, asked if we had any food allergies (we don’t) and predicted we’d get a text for a seating at about 7:15 or 7:30 p.m. Instead of drinking, we strolled three blocks over to Best Buy and Target and did some shopping. At 7:30 p.m., I texted Bad Saint to check our status. Not quite ready, came the reply. At 7:50 p.m., we got the text we were waiting for, and we were seated by 7:55.

We kicked off with kinilaw, a tasty bowl of cool coconut puree mixed with zippy watermelon radishes and small, dense chunks of mackerel. The mackerel added a meaty, protein-packed punctuation point to an otherwise light starter. Next, a plate of ginisang ampalaya — sautéed bitter melon — arrived hot, flavorful and fragrant. The bitter melon is as advertised, and will momentarily turn your taste buds inside out while it overpowers the earthier, typical Filipino flavors. A boiled farm egg and preserved black beans help keep things grounded, however, and flecks of habanero pepper add a spicy kick. Good stuff.

As the ukoy fritters arrived, the hostess bopped by singing along to Benatar’s “Love is a Battlefield.” The happy commotion couldn’t quite distract us from the immense, golden glistening globes arriving simultaneously. At first glance, the stringy orbs conjured an exotic sea creature. Our server urged us to dig in with our hands, so we did. As if the thin, crisp, batter-fried sweet potato puree wasn’t inviting enough, our palates quickly detected plump chunks of freshwater shrimp tucked inside. The more we dunked the fritter into the tangy dipping sauce — a simple, sharp concoction of white vinegar, red onion flecks, serrano pepper slivers and garlic — the more our mouths burned. Sometimes, pain is pleasure. Other flavorful dishes piled up, but I kept returning to the fritters until they were demolished.

Unfortunately, the pancit bihon guisado — rice noodles, wood ear mushroom and lemon oil — was subtle to the point of irrelevance, and we didn’t come close to finishing it. But if you arrive at Bad Saint with an appetite on a cold winter night, seriously consider the kalderetang kordero, a showstopper at the end of the menu. It consists of lamb neck, sunchokes and castelvetrano olives — bright green gems with a meaty, buttery flesh. This beautiful, glistening brown dish was warm, slightly salty, creamy and oh-so-deliciously rich.

We were pleasantly surprised by Bad Saint’s generous portions. For the price of small plates in many D.C. restaurants, the powerful kitchen delivers what amounts to near-full entrées. But we were a bit distressed by the pacing. Five dishes arrived within 10 minutes of each other, leaving hardly any room to maneuver in the little space. Bad Saint obviously wants to turn tables and discourage lingering. But you might consider ordering two or three menu items first, then placing a second order to avoid feeling rushed, or worse, eating lukewarm food. But pacing was a small quibble considering it was the best meal we’ve had in the New Year.

This time we beat the rush and arrived at 5:25 p.m. on a Wednesday. The frigid cold and mid-week slot put us 15th in line, allowing an immediate seating at 5:35. Little Serow’s menu is prix fixe at $59 per person sans any alcohol. Not cheap for Thai food, but this isn’t your ordinary American Thai experience. 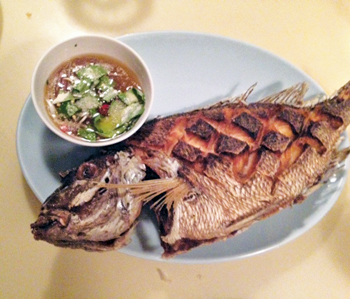 Little Serow has earned acclaim for its inventive take on Thai food.

With just 28 seats, Little Serow manages to feel spacious. Exposed brick painted an appealing shade of turquoise and the cream-colored corrugated tin roof evoke the feeling of an updated but rural Thai shack. Diners get cozy in small booths and at a long, gleaming white counter that slices the dining room in half. At first glance, Little Serow’s white plates appear to be paper. What? Paper plates at fifty-nine bucks a pop? A closer inspection reveals them to be porcelain — a playful trick that enhances Little Serow’s rustic, out-of-the way vibe. A ’50s-era soundtrack pumped out classic country songs — think Hank Williams, Patsy Cline and early Willie Nelson. Little Serow’s menu is fiercely authentic and on our visit, the seven-course menu was all seafood served northern Thai-style, which means spicy. Bring it on.

We started with gaap kai buu — half of a small, roasted coconut husk filled with a dusky brown mud crab and shrimp paste. A plate of fresh-cut watermelon radishes, cabbage slices and cucumbers showed up, along with a bamboo basket of sticky rice. Our server suggested we use the vegetables or fingerfuls of sticky rice to swipe the paste from the husk, so we did. Smoky-spicy and dense, the crab mix got our taste buds popping. A second course of tom saep soup with squid, lemongrass and mushroom was piquant and delicate with a steamy, tangy broth. Not exceptional, but certainly a step beyond typical lemongrass Thai soups.

Up next: a pile of shredded catfish with mint, lime and khi nu chiles. I was dubious, but the interplay of chiles, mint and lime had my palate spinning. The subtle catfish mush accompanied by crisp, fresh cabbage wedges served as a solid foundation and helped focus the dish. We were less impressed with the fak thawng nueng — roasted pumpkin wedges with a yellow bean and lobster roe puree. The purple squash was nicely cooked but couldn’t stand up to the intensely rich puree. Not bad, but not extraordinary.

We had similar ambivalence about a curried, stir-fried shrimp, scallion and scrambled egg dish that arrived next. Somehow the egg rang an off-note in the midst of all the flavorful seafood. The dish was reminiscent of pad thai without the noodles. We didn’t finish it.

Little Serow’s kitchen got back on track with the final course, a whole whitefish scored and grilled to perfection and draped in a rice powder. The fish’s crispy skin remained intact with delicate, tender mild flesh underneath. We ate this with our fingers, dipping the piping hot chunks of fish flesh into a tangy vinegar sauce. It was a fine finish to a decent, if not exceptional, meal.

Many restaurants opting to bypass the traditional reservation systems are taking chances with their menus, as well. Not everything works, but chances are you’ll be glad you made the effort and took the journey.