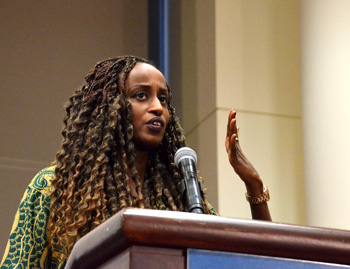 Leyla Hussein was 7 when it happened to her. She remembers hearing her sister screaming from the room adjacent to their bedroom and then someone saying, “Go get Leyla.” Then, she recalls being held down on a table, her legs pinned back, and a searing pain that caused her to black out.

At the ripe old age of 7, Hussein had become one of millions of girls who are the victims of female genital mutilation (FGM), though she prefers the term survivor. Today, the Somali-born social activist is leading the charge to end FGM, which, she notes, impacts some 140 million girls around the world, even in places you might not expect.

Somali-born social activist Leyla Hussein is leading the charge to end female genital mutilation, which, she notes, impacts some 140 million girls around the globe, in both the developing and developed world.

“It still happens in the U.K., in Canada and Europe. It’s happening here, in the U.S. Girls with my accent have undergone FGM,” Hussein said in her London accent at the one-day Censored Women’s Film Festival in Washington, D.C., where the many different ways that violence is perpetrated against women were exposed in disturbing films and discussed by panels. Among those practices are FGM, honor killings, rape and child marriage.

While FGM is considered barbaric in many parts of the world, contrary to popular belief, it has thrived in both the developing and developed world.

“A lot of people think FGM happens ‘over there,’” said Charlotte Feldman-Jacobs, the gender program director at the Population Reference Bureau (PRB). But data collected by the PRB and, in a separate study, by the U.S. Centers for Disease Control and Prevention found that half a million women and girls in the United States are at risk of or have been subjected to FGM. That’s a significant jump in numbers from 1997, when an earlier study found there were nearly 170,000 FGM-at-risk women in the United States.

The steep increase is blamed partly on the rise in immigration from Africa and the Middle East to the United States, experts note. FGM is practiced mainly in Africa and in some Middle Eastern countries, by “households at all educational levels and social classes,” Feldman-Jacobs said, and “among many religious groups, although no religion mandates it.”

FGM, in fact, is deeply ingrained in many patriarchal societies and predates Islam, Christianity and Judaism. The practice stems from the cultural belief that a woman’s virtue and chastity will be preserved if she can never experience sexual pleasure. Myths and misconceptions about the practice also abound (some, for instance, believe it confers good luck or is largely symbolic and doesn’t result in any real damage).

FGM refers to procedures that involve the partial or total removal of the external female genitalia or intentional injury to the female genital organs for non-medical reasons.

FGM is mostly carried out on young girls some time between infancy and age 15, often by traditional circumcisers — using, scissors, blades or crude instruments in settings where hygiene can be nonexistent (although it is sometimes done at clinics or medical offices).

It has no health benefits but plenty of harmful, and in some cases horrific, side effects. According to the U.N. Population Fund, immediate complications include severe pain, shock, hemorrhage or infection, which in some cases can lead to death. Among the long-term consequences are urinary incontinence, recurrent infections, psychological trauma, scar formation, cysts, abscesses, sexual dysfunction, fistulae, infertility and increased childbirth risks.

Although the precise number of women and girls who have been cut is hard to quantify, because no one wants to talk about FGM, best estimates are that the number is somewhere between 100 million and 140 million.

But since FGM was recognized as a health and human rights issue in the early 1990s, efforts to end the practice have been stepped up and anti-FGM laws have been passed in 25 of the 29 African and Middle Eastern countries where PRB collected data. This has helped to significantly drive down the number of girls who are cut each year.

Leyla Hussein says that enacting legislation is vital if FGM is to be wiped out. But she cautions that the laws on the books must also be applied, including in the United States and Britain.

FGM was outlawed three decades ago in the U.K. and the United States banned it in 1996, but girls are still being “circumcised” in both countries (many people don’t use that term because it implies that male and female circumcision are related, when in fact they are vastly different). Girls are also being cut when they return to their parents’ countries of origin on holiday. That practice has been given the casual-sounding name of “vacation cutting.” But its innocuous name belies the far-reaching and life-changing consequences of vacation cutting. Britain recognized the phenomenon in 2003 when it passed a law whereby anyone convicted of taking a girl out of the country to be cut could face 14 years in prison.

Since July 2015, the U.K. has also had a law that allows a girl, a local authority or anyone else to apply to a family court for a protection order against FGM, including when “vacation cutting” is suspected. In such instances, passports can be confiscated.

On the day the law came into force, police in Bedfordshire obtained an order to stop two girls from traveling to Africa, citing fears that they would be mutilated. Two weeks later, British police investigated the case of a girl they suspect underwent FGM in Malaysia when she was an infant.

A few months later, however, two women who were suspected of performing FGM on girls slipped through the net and fled to Africa, the London Evening Standard newspaper reported. One of the women had been arrested in Bristol on suspicion that she had mutilated “one or more girls” and that “the procedure, illegal in Britain since 1985, might have been carried out here,” the paper reported.

The two women escaped to Africa after “attempts by police to persuade local social services to obtain a court FGM protection order were rebuffed,” according to the Standard.

Activists say the failure of social services to act to keep the women from fleeing is a sign of how much work needs to be done to change the mindsets of people who commit FGM.

Hussein said that having statutes on the books is important, but only if they have teeth. She noted that no one has ever been convicted under Britain’s three-decade-old FGM act or its vacation cutting law.

Many human rights groups argue that the most effective approach to combat FGM is an incremental one that works with local leaders, educates the population, dispels misconceptions and doesn’t inflame cultural sensitivities. But Hussein doesn’t do subtlety. She believes that the way to banish FGM is to shock and outrage ordinary people into action. She contends that far too many people remain silent on the scourge either because of ignorance or fear of offending different cultures. 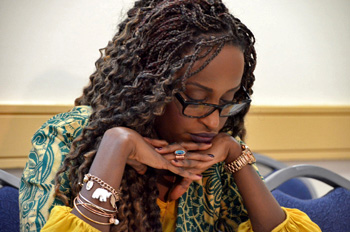 “I’d love to see America get pissed off about this,” she said at the film festival in Washington. “But it needs to come from all sides. The government won’t listen if people say, ‘We don’t see these women,’” she argued, calling on health professionals in particular to stop ignoring the glaring signs that a woman or girl has been cut.

Hussein put her shock tactics into action in Britain, with a large degree of success. A documentary film she made with Love Productions and Channel 4 Television led to the government calling an emergency meeting on FGM after Home Secretary Theresa May refused in the final scene of the film to meet with Hussein.

To boost awareness among Britons of FGM, Hussein set up a pink tent, festooned with bunting depicting vaginas, on the south bank of the Thames River in London. “It’s cunting, not bunting,” Hussein declared in the film “The Cruel Cut,” using crude slang for vagina. It’s part of Hussein’s philosophy that, sometimes, political correctness and diplomacy have to be thrown to the wind to make a point, and she can think of no point that is more worth making than denouncing FGM.

Outside the pink tent, Hussein handed out colorful cupcakes with a decorator’s rendition of a vagina on top to passersby and invited them inside the tent to learn more about FGM. The camera focuses on the facial expressions and twitching hands of the audience members as Hussein shows them pictures of level three FGM, also known as infibulation.

Infibulation entails excising the clitoris and labia and stitching together the edges of the vulva to prevent sexual intercourse. Hussein described it as having “everything taken off and you’re stitched from top to bottom and left with a very small opening through which you’re expected to urinate, menstruate, have intercourse at some point and give birth,” she explained to the visibly uncomfortable audience in Washington.

Angela Peabody, a Liberian immigrant to the United States who heads the Global Woman Peace Foundation in Virginia and counsels FGM survivors, told The Washington Diplomat that one woman who “was stitched up told me it takes her 30 minutes to urinate. These are the kinds of things victims go through. So it’s not just the initial cut. It’s what comes after. FGM is a life sentence.”

The pictures of infibulations and lesser levels of FGM that Hussein exposed inside the pink tent and in Washington are upsetting. In “The Cruel Cut,” many of the people who ventured into the pink tent after delighting in their vagina cupcakes said they were prepared to become anti-FGM warriors. They also said they had no idea that such misogynistic, barbaric practices existed, especially in a place like Britain.

Hussein’s scare tactics could contribute to FGM being wiped out within a generation, something UNICEF said in an August 2015 report is possible. Surveys conducted by UNICEF found that two-thirds of women and almost two-thirds of men living in the 29 countries where FGM is most practiced think that the cutting of girls should stop.

“If public dialogues can be initiated, people may begin to see that social expectations about the practice are no longer valid,” the UNICEF report said. “Finding ways to make hidden attitudes favoring the abandonment of FGM more visible, and opening the practice up to public scrutiny in a respectful manner, as is being done in many programs throughout Africa, can provide the spark for community-wide change.”

Those who defend FGM say it’s a traditional cultural practice and a rite of passage that should remain private. Women, in fact, many of whom underwent the procedure themselves as children, often subject their daughters or granddaughters to it under the belief that it is simply an inherent part of growing up.

But Hussein rejects those defenses, saying FGM is nothing but child abuse and a form of torture that should land practitioners on a sex offender’s list.

She also notes that, as a so-called rite of passage, FGM is supposed to represent the moment when a girl becomes a woman. Hussein was cut when she was 7 to groom her for a husband — hardly the age of a girl preparing to enter womanhood, let alone wedded bliss. Perhaps knowing the gruesome details of what happens behind millions of closed doors and seeing the graphic images of mutilated women will spur Americans into action, Hussein said.

“We need to challenge the attitude that it’s OK for women to go through this,” she said.

“Until there’s public outrage in the U.S., the government won’t listen or do anything,” she added. “That’s what happened in the U.K. We used the film to aggravate the British, and they are very PC — even their anger is very PC.”

“I’d love to see Americans pissed off about this because that would be at my level of being pissed off.”