Home The Washington Diplomat January 2015 Hyperthyroidism: Too Much of a Good Thing 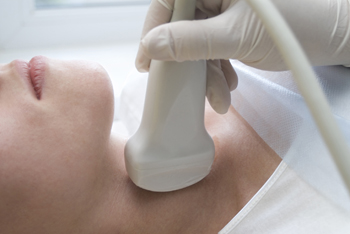 Editor’s Note: This story is the second in a two-part series on thyroid disorders. Last month’s story examined hypothyroidism.

Hyperthyroidism, like hypothyroidism, is more common among women and produces a variety of symptoms, from heart palpitations to pregnancy complications.

When you’re pregnant, you often find yourself hyper-aware of every little change in your body and wondering what it means about your health and your baby’s. That twinge in your belly — was it the baby kicking for the first time? Just a cramp? Or a sign of a serious problem?

One set of symptoms you should never ignore (whether pregnant or not): shortness of breath and/or heart palpitations. These may be — and often are — just the typical accompaniment to a normal pregnancy, but in some cases they can point to a condition that can be dangerous: hyperthyroidism.

Last month, we talked about hypothyroidism, which is when the thyroid — that butterfly-shaped gland at the base of the neck that helps to regulate your metabolism — is sluggish. The thyroid can also develop exactly the opposite problem, switching into overdrive in a condition known as hyperthyroidism.

Hyperthyroidism is less common than hypothyroidism and more difficult to treat (often, the end goal of treatment is to get to a hypothyroid state, the lesser of two evils). The most common cause of hyperthyroidism is known as Graves’ disease, which overwhelmingly strikes women, often in middle age. It’s an autoimmune condition in which your body’s immune system produces antibodies against its own healthy cells — in this case, antibodies that bind to the surface of thyroid cells and stimulate them to produce too much thyroid hormone.

The two other causes of hyperthyroidism are thyroid nodules and inflammation, including postpartum thyroiditis, which causes a burst of excess thyroid hormone to leak into your bloodstream. Unlike Graves, however, a bout of thyroiditis will generally resolve on its own in a few weeks or months.

While Graves can strike at any time in life (it’s been suggested stress can trigger an onset of symptoms), the disorder is particularly dangerous in pregnancy. It occurs in about one of every 1,500 pregnant women. Some already have an overactive thyroid when they become pregnant (whether or not they’re aware of it); others develop hyperthyroidism during pregnancy.

Besides heart palpitations, flutters and shortness of breath, the symptoms of hyperthyroidism can include:

Some of these symptoms also sound a lot like the symptoms a woman will experience during a normal pregnancy, which is part of what makes diagnosing hyperthyroidism in pregnancy so tricky. But it’s important not to ignore these symptoms, because if they do point to thyroid disease and your hyperthyroidism isn’t controlled, it can lead to a host of problems for both you and your baby, including premature birth and low birth weight, or even miscarriage and stillbirth. For women, the risks include congestive heart failure, anemia and, very rarely, an extreme and potentially life-threatening form of hyperthyroidism called thyroid storm.

Hypothyroidism in pregnancy can also be dangerous, potentially harming fetal brain development. But despite these risks, most national medical organizations don’t recommend routine thyroid testing in pregnancy unless a woman has symptoms or is otherwise at high risk for a thyroid disorder (for example, if she has a significant family history of thyroid problems).

One organization, the American Association of Clinical Endocrinologists, recommends routine thyroid screening in all pregnant women. Others are waiting for the results of large clinical trials that aim to test whether or not treating pregnant women with mild thyroid disorders improves outcomes for mother and baby.

That’s because the treatments for hyperthyroidism or hypothyroidism during pregnancy have risks of their own. Both anti-thyroid medications used to treat hyperthyroidism and, to a lesser extent, thyroid hormone pills that treat an underactive thyroid can cross the placenta and potentially affect the developing baby.

The thyroid, a butterfly-shaped gland in the neck, plays a major role in regulating the body’s metabolism.

A study presented at the American Thyroid Association meeting in 2013 found that two of the drugs most commonly used to treat hyperthyroidism, propylthiouracil (PTU) and methimazole, were linked to a 50 percent to 75 percent increase in birth defects, with methimazole carrying a higher risk (which is why PTU is prescribed during the first trimester). PTU was linked primarily to facial and neck anomalies, while methimazole was tied more commonly to musculoskeletal problems.

Even for women with Graves who aren’t pregnant, PTU and methimazole carry risks. PTU, in fact, is almost never used because of its side effects, and methimazole isn’t always recommended as a long-term treatment option, especially if the hyperthyroidism is severe. (In 20 percent to 30 percent of cases, Graves goes into remission after about 12 to 18 months, although it can return.) Beta-blockers are often prescribed to control heart symptoms, but they do not address the underlying disease.

Beyond medication, the only two other treatments for hyperthyroidism are surgery to remove the thyroid and radiation to kill it — with the latter more commonly used in the U.S., while surgery is the treatment of choice in Europe. Both methods usually render the patient hypothyroid, which is more easily treated with thyroid hormone replacement drugs. Neither surgery nor radiation, though, is recommended for pregnant women (and those thinking of conceiving are advised to wait a year after undergoing radiation).

So the question of how to deal with thyroid dysfunction in pregnancy is a delicate dance between two sets of risks. Research seems to show that mild thyroid disorders can be managed during pregnancy with careful monitoring, only using medication if the condition starts to get out of control.

Regardless of pregnancy, anyone who suspects their thyroid is out of whack should see their doctor to get their blood tested. Hyperthyroidism can cause serious complications if left untreated, including heart failure and osteoporosis. The thyroid steers a range of important functions in the body, so when it’s not running smoothly — whether it’s gone into overdrive or slowed down — the breakdown can have a profound impact on your health and wellbeing.