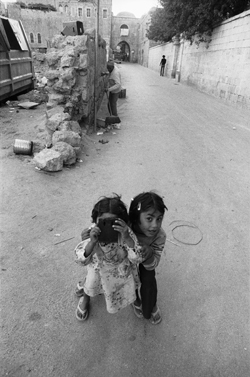 Swiss photographer Jean Mohr’s exhibition “War from the Victims’ Perspective” at the Wilson Center features images such as the one above of the photographer being photographed, in Jerusalem in 1979.

On many levels, it is a daunting task to photograph victims of war, but it is arguably even more challenging to make their plight accessible to casual observers. How can one wrenching moment frozen in a picture transmit the pain and depth of emotion felt by individuals who’ve experienced conflict, violence and displacement?

At the same time, which moment will surmount a viewer’s discomfort and, instead, evoke understanding? These sensitive tensions can be felt, and assuaged, in “War from the Victims’ Perspective,” a collection of photographs taken by Swiss photographer Jean Mohr and currently on display at the Woodrow Wilson International Center for Scholars, in conjunction with the Swiss Embassy.

The United Nations counts about 43 million victims of conflict and persecution around the world who have been uprooted from their homes. For a country only about twice the size of Massachusetts, Switzerland has done more than its fair share of humanitarian work to help such individuals. Once known as the land of asylum for everyone from refugees to anarchists, it also birthed the International Committee of the Red Cross (ICRC) in 1863. The organization was inspired by the experiences of Geneva businessman Henry Dunant, who was moved to action by what he saw in Italy in the wake of the bloody Battle of Solferino. After writing about the suffering of soldiers and civilians in “A Memory of Solferino,” Dunant linked visions with Geneva Society for Public Welfare members to create what came to be known as the ICRC.

“Today … Dunant’s description of the reality of war appears strangely familiar,” said Ambassador of Switzerland Martin Dahinden in remarks at the opening of Mohr’s exhibit. “Eyewitness accounts from Syria, the Central African Republic and South Sudan are uncannily similar to the picture painted by Dunant. Technological advances have altered warfare, but Dunant’s pioneering idea has lost none of its relevance and urgency.”

“War from the Victims’ Perspective” commemorates the 150th anniversaries of the ICRC and the first Geneva Convention in 1864, which called for improving conditions for the victims of armed conflicts and led to the development of modern-day international humanitarian law. Mohr is no stranger to ICRC’s mission, having himself been a delegate for the organization in addition to helping out with other humanitarian aid organizations such as UNRWA, UNHCR and the World Health Organization. These experiences permeate his photographs, and although the subjects in the images are so-called “victims,” this label does not define their existence, as seen through Mohr’s camera lens. 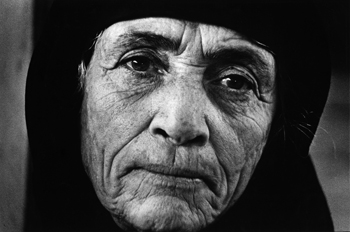 a Greek refugee in 1976 Cyprus

Mohr is careful to define himself. A graduate of business studies, he is not one of those photographers who explains their talent through the childhood gift of a camera or an innate passion. In a video featured in the exhibit, he says, “I’m not a war photographer, because being a war photographer means being there, taking risks. As a ICRC delegate, I had a long-term program to fulfill and this was not a magazine’s front-page shock image.”

That Mohr is not focused on shock value is clear in his photographs. The exhibition features 60 of his works, split into four sections: “Portraits of Exile”; “Temporary Landscapes”; “The Children’s Diaspora”; and “Life Goes On.” In one photograph, two Greek refugees in Cyprus stand looking at something near the foot of a staircase. What the women are staring at is unclear, but it is difficult not to feel the suspense — what are they waiting for? One photo shows a Mozambican refugee at Sunday mass; she is covering her face with her hands and has a child on her back. Is she crying or praying? Another photo shows three children laughing, one of them holding up a deck of cards — are they aware of their situation? But should their challenges render them immune to the lightness of youth? 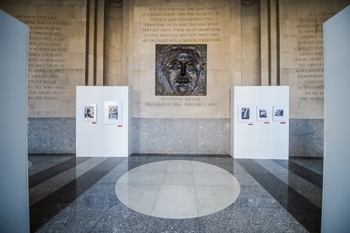 Swiss photographer Jean Mohr’s exhibition is at the Wilson Center.

Beyond the captions telling us these individuals are refugees — victims of a political context out of their control — we know nothing more about them, nor do we necessarily need to. The moments Mohr captures make us forget that his subjects are victims and instead offer a brief, unvarnished glimpse of their lives. He excels at breaking down the barrier between victim and observer so that the only thing left is what we have in common: our humanity.

“They invited me not because my approach was more gentle, but because people could identify with it,” explains Mohr in the clip. “You can’t identify with a corpse, but you can identify with someone at a well drawing water to take to camp a few kilometers away.”

His mission is clear: capturing photos that catch people’s attention — long enough to awaken their conscience into action, or at least stir a reaction. At Frankfurt’s Photokina photography fair in 1978, Mohr was awarded the prize for the “photographer who had most consistently served the cause of human rights.”

“Jean Mohr’s photography reminds us that our work … is always about protecting the victims,” Dahinden said. “The Geneva Conventions seek to uphold human dignity even during armed conflicts. This unwavering commitment to human dignity continues to be at the core of all humanitarian action.”

War from the Victims’ Perspective: Photographs by Jean Moh