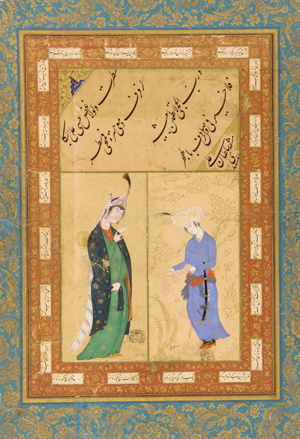 “Nasta’liq: The Genius of Persian Calligraphy” at the Arthur M. Sackler Gallery highlights 25 works ranging in date from 1400 to 1600, including, an album folio signed by Sultan Ali Mashhadi.

While the contemporary focus on Iran is largely clouded by geopolitical bickering, the richness of the country’s culture and history still shines despite the tensions and turbulence of the last few decades. One token of this wealth is the popular nasta’liq form of Persian calligraphy, currently on display in “Nasta’liq: The Genius of Persian Calligraphy” at the Arthur M. Sackler Gallery, which, along with the Freer, has been one of the prime venues for Americans to experience Iran’s artistic contributions.

“Nasta’liq represents one of the most accomplished forms of Persian art, developed at a time of cultural and artistic effervescence in Iran,” said Simon Rettig, exhibition curator and fellow at the Freer and Sackler galleries. “In a sense, it became the visual embodiment of the Persian language enthusiastically embraced from Istanbul to Delhi and from Bukhara to Baghdad.”

More than 20 rarely seen masterworks ranging in date from 1400 to 1600, the height of nasta’liq development, illustrate its evolution from a simple tool of writing poetry to an expression of art. “With sinuous lines, short vertical strokes and an astonishing sense of rhythm, the script was an immediate success and was rapidly adopted throughout the Persian-speaking world from Turkey to India,” according to the Sackler.

The elegant script is a blend of the naskh (meaning “to copy”) and ta’liq (meaning “suspension”) styles of calligraphy and was conceived by Mir Ali Tabrizi (known as such because he lived most of his life in Tabriz, Iran). He was the most famous calligrapher of the Timurid dynasty, a period marked by a renaissance of art and culture. While calligraphy was previously written in Arabic and Turkish script, Tabrizi wanted to develop a Persian alternative.

“The script was specifically created for the Persian language and culture — that’s where the ‘genius’ lies,” said Rettig. “There was a need to visually render the difference between traditional, Koranic scripts and a new medium for Persian culture.” 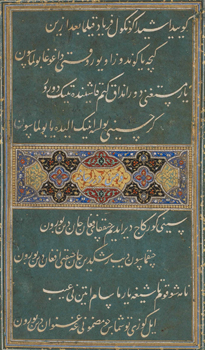 a folio from a ‘Divan’ by Sultan Husayn Bayqara

As such, the new script very rarely appears in Koranic or other religious texts but is used more often to convey classic Persian poetry. Legend has it that Tabrizi invented the new style after the Prophet Muhammad’s cousin and son-in-law, Ali, appeared before him in a dream and guided his hand to replicate the shape and motion of geese wings. 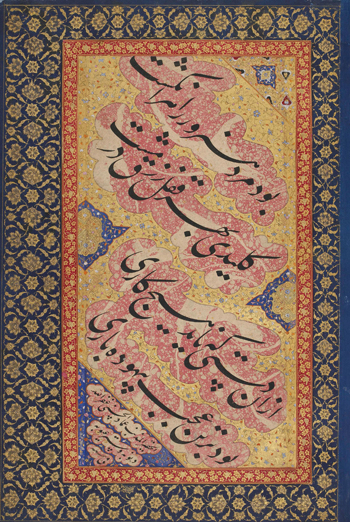 a folio of calligraphy signed by Mir Imad Hasani

Calligraphy deeply permeated Persian life, and beautiful writing styles represented a matter of pride and honor. Calligraphers, who were often attached to royal or princely courts, were revered and given celebrity status. The Sackler exhibition showcases four different calligraphers: Mir Ali Tabrizi, Sultan Ali Mashhad, Mir Ali Herat and Mir Imad Hasani. Each appropriated the script and added their own touch through slanting text or other personalized flourishes.

The collection includes the only known signed work by Tabrizi: a 1400 manuscript depicting the romantic tragedy of Khosrow and Shirin, a tale by Persian poet Nizami Ganjavi. Two folios from 15th-century ruler Sultan Husayn Bayqara’s poetry collection are also featured. In addition, a video shows the enduring influence of nasta’liq and how the techniques and tools of nasta’liq calligraphy are still being used by masters of the script today.

“You have this development where you go from a smaller, petite form of script to a larger scale where only one or two couplets are shown on a single page,” said Rettig. “At some point, while the poetry itself is beautiful, what you end up contemplating is the shape of the letters and script.”

In the process, the words took on a deeper meaning, and a device for writing transformed into an artistic tradition.

“When the form prevails over the content, that’s when you know you’ve accomplished something in calligraphy,” said Rettig. “This is unique to nasta’liq.”

Nasta’liq: The Genius of Persian Calligraphy

through March 22
until the Persian New Year of Nowruz, which the museum celebrates each year with a family festival and free activities for all ages.
The Arthur M. Sackler Gallery
1050 Independence Ave., SW
For more information, please call (202) 633-1000 or visit www.asia.si.edu.