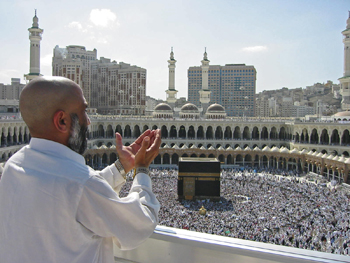 To help repel the territorial advances of the so-called Islamic State, the United States has sought out an old ally in Saudi Arabia. But analysts say Riyadh and Washington see two distinct images from the same drawing of chaos in Syria and Iraq: The Saudis are focused on overthrowing Syrian President Bashar al-Assad, while the Americans are chiefly concerned with — to use President Obama’s words — degrading and ultimately destroying the Islamic State, also known as ISIS or ISIL.

Contradictory means underpin these goals, as illustrated by Riyadh’s willingness to support jihadists fighting Assad who have no love for the United States. The efficacy of Saudi-American cooperation against the Islamic State may rest partly on how much the Saudi hereditary monarchy, which has long exported its austere brand of Islam, sees the terrorist group as a direct threat to the kingdom. Recent events indicate Saudi royals are keenly aware of that danger. But history also shows a vicious boomerang effect on U.S. and Saudi targets stemming from Saudi support for fundamentalism, most obviously with the terrorist attacks of Sept. 11, 2001.

A supplicating pilgrim prays at Mecca in Saudi Arabia. The Saudi monarchy considers itself to be the guardian of Sunni Islam, and the ruling family’s legitimacy stems in part from its alliance with the conservative clerical establishment.

“Our objectives align but they’re not congruent,” said former U.S. Ambassador to Saudi Arabia Charles W. Freeman Jr., referring to U.S. and Saudi goals in quelling violence in Syria and Iraq. “Da’ish has actually been useful to the Saudis in terms of their … objectives in both Syria and Iraq,” he added, using the Arabic acronym for the Islamic State. “Which is not to say they’re aligned with Da’ish, but they’re much less concerned about it than we are.”

Those Saudi objectives include blunting the influence of its regional rival, Iran. For this, Islamic State fighters, who despise Shiites and have executed them in droves, have been convenient for a Saudi monarchy that claims to be the guardian of Sunni Islam and is dealing with its own restive Shiite minority. Assad, meanwhile, is an ally of Iran whom Saudi Arabia desperately wants to see unseated.

Against that backdrop, two recent developments in Saudi-American cooperation against the Islamic State stand out. First, Saudi Arabia in September agreed to a U.S. request to host training for moderate Syrian rebels on Saudi soil. The agreement, whose details remain vague, seemed to breed confidence on the U.S. side about Saudi willingness to combat the group.

“We are in a position, I think, to be pretty specific with the Saudis about what we’d like,” a senior State Department official told The New York Times when the newspaper reported the agreement. “We’re fairly confident they will be forward leaning on this.”

But if and when graduates of the Saudi training camp reach Syria, they will join a mélange of fighters with various allegiances that make it difficult to distinguish between who is fighting Assad and who is fighting the Islamic State.

The second recent development in Saudi-American cooperation against the Islamic State saw Saudi Arabia and a handful of Arab countries join the U.S.-led coalition to bomb the terrorist group in September. The Saudis may have preferred those bombs aimed at Damascus, but they nevertheless saw an upside in joining the coalition, according to journalist David Ottaway of the Wilson Center.

“I think the disagreement [in targeting Assad or the Islamic State] was always there but the Saudis calculated it was more important to get the Obama administration re-involved in the Middle East after years of dithering and talking about the ‘pivot to Asia,’” said Ottaway, former Cairo bureau chief for The Washington Post and author of a book on U.S.-Saudi relations.

Since then, however, Saudi Arabia, along with America’s other Persian Gulf allies, have grown frustrated by Obama’s campaign of airstrikes, despite having clamored for an intervention for years. They say the military offensive, which exclusively targets the Islamic State, inadvertently helps the Syrian regime and symbolizes the administration’s seemingly ambivalent goals in the region.

The Saudis have long wanted Obama to do more to combat Assad and were disappointed when the American president opted not to order airstrikes on Damascus last year after Assad allegedly used chemical weapons. A reported meeting earlier this year between Secretary of State John Kerry and Prince Bandar bin Sultan, who was ambassador to the U.S. for over 20 years and Saudi intelligence chief until April, summed up the two countries’ frustrations with each other’s Syria policy. According to journalist Patrick Cockburn, Kerry pressed Bandar on Saudi financing of jihadists in Syria, and the latter shot back by sharply criticizing Obama for not using force in Syria in response to Assad’s reported use of chemical weapons.

A more agreeable and straightforward topic for Washington and Riyadh is defending Saudi Arabia from the Islamic State threat to the kingdom. An estimated 2,000 Saudis have joined ISIS, the BBC reported, and the terrorist group has sought to capitalize on what appeal it has in the kingdom.

An audio recording purportedly of Islamic State leader Abu Bakr al-Baghdadi, released by the group’s media arm Nov. 13, called on sympathizers in Saudi Arabia to rise up against the ruling House of Saud. Baghdadi also called for attacks against Shiites in Saudi Arabia’s oil-rich Eastern Province. He likely felt emboldened by a Nov. 3 attack by gunmen that left several Shiites dead in that province’s al-Ahsa district. Saudi authorities responded swiftly, reportedly arresting no less than 77 people and blaming the Islamic State for ordering the attack.

The quick response from Saudi authorities, along with Saudi Interior Minister Mohammed bin Nayef’s reported visit with victims’ families, likely show that the incident is affecting how Riyadh evaluates the threat from the Islamic State, wrote Simon Henderson, a Gulf expert at the Washington Institute for Near East Policy, in an email. 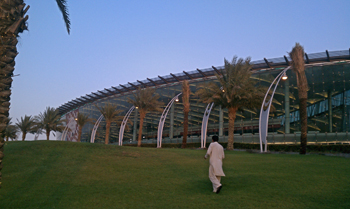 A man walks by the Mall of Arabia in Jeddah, a major urban center in Saudi Arabia.

The Saudi government has used this dual approach to extremism — killing suspected militants and touting Saudi religious credentials — to beat back terrorism on its own soil in recent years. Saudis cite that record to anyone who would question the country’s commitment to defeating the Islamic State, pointing out that hundreds of Saudis were killed in al-Qaeda-inspired attacks over the last decade.

“Saudi Arabia is the only authority in the region with the power and legitimacy to bring ISIS down,” two Saudi scholars wrote in a New York Times op-ed in September. “Having effectively eradicated al-Qaeda in the kingdom, the Saudi government, with its experience fighting terrorism, is uniquely positioned to deal with ISIS, which is, after all, an al-Qaeda-aligned organization.”

Yet doubts in the West about the Saudi government’s commitment to defeating the Islamic State may always linger, given Riyadh’s history of support for Islamic extremists.

The jury is still out on laws introduced by the Saudi government last year to ban financial support for jihadist groups and stop young Saudis from going abroad to fight, according to Henderson. “It’s not clear how successful these measures have been and, given Saudi past support for jihadists in Afghanistan, Chechnya [and] Bosnia … how sincere Riyadh is,” he wrote.

The skepticism is well founded given that Saudi Arabia’s own hard-line Wahhabi strain of Islam (or Salafism as the Saudis prefer to call it) provides the bedrock for the puritanical beliefs that guide Islamic State extremists. The Al Saud dynasty espouses this literal interpretation of Islam as part of its ruling bargain with the country’s powerful Wahhabi clerics, who in turn provide the family with religious cover. The House of Saud is left to govern politically, while the clerics hold sway over social issues. But this alliance is being tested by the large number of radicalized Saudis flocking to the Islamic State who could return to pose a threat to the kingdom.

The House of Saud has moved to criminalize public support to certain terrorist groups, but the Islamic State’s quest to create a Muslim caliphate resonates with some in the conservative society who view Shiites as infidels and the West as enemies.

Both al-Qaeda and the Islamic State have long railed against the Sunni monarchy’s coziness with the United States, so the American plan to train a rebel Syrian army in Saudi Arabia could backfire and attract jihadi recruits. “Recall that the presence of U.S. troops in the kingdom during and after the first Gulf War became a source of rage for Sunni clerics and a recruiting bonanza for a then tiny outfit called al-Qaeda,” wrote Dan Murphy of the Christian Science Monitor.

For Freeman, Washington’s lack of insistence on Riyadh taking the lead to address a security threat that directly affects the Saudis has had a perverse effect. “One of many flaws in our approach to all of this is the creation of moral hazard, meaning that we step in to assume risks for others and thereby relieve them of those risks, which means that they’re free to pursue other priorities,” he said. “So we inadvertently reinforce the Saudi proclivity not to see Da’ish as the most menacing development in the region, or not to see it as the first priority.”

What’s clear is that Saudi Arabia, as in previous Middle East conflicts, is a key but bedeviling ally for U.S. efforts to stop the Islamic State. If the game was only about defending Saudi soil from the group, Riyadh and Washington would be in lockstep. But when it comes to applying that cooperation to foreign lands in Saudi Arabia’s backyard, the two sides remain out of sync.