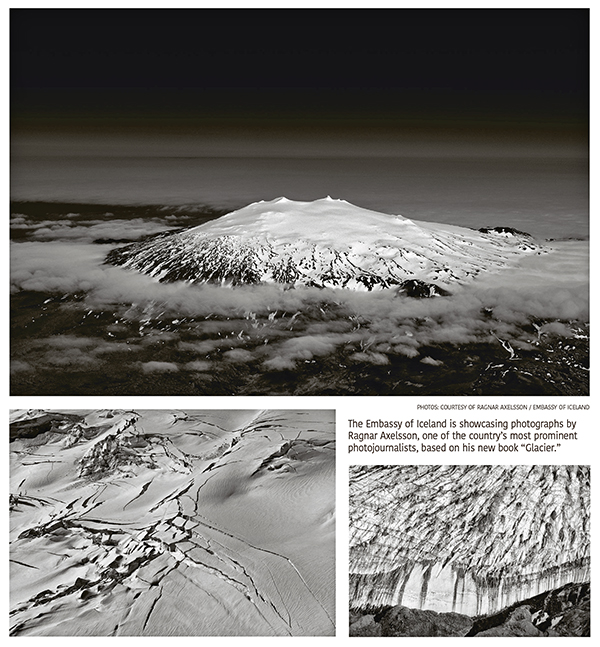 As Iceland takes over the chairmanship of the Arctic Council, the country’s embassy in D.C. is showcasing this stunning but endangered frozen landscape, which is becoming a hotly contested battlefield in the fight against climate change.

The exhibition “Glacier” features images by Ragnar Axelsson, also known as RAX, one of Iceland’s most well-known photojournalists.

He has been capturing nature and life in the Arctic for nearly three decades, traveling to the remote, enigmatic region throughout his life.

Axelsson, a staff photographer at Iceland’s second-largest newspaper since 1976, has had his documentary photographs and picture essays published in Life, National Geographic, Time and other prominent magazines.

While Axelsson has documented a wide range of subject matter, from AIDS patients in Mozambique and South Africa to uprisings in Latvia and Lithuania, the Arctic is home to his lifelong passion.

In 2010, Axelsson’s book “Last Days of the Arctic” won critical acclaim for its depiction of the indigenous cultures and communities that call this isolated, vanishing polar tundra their home.

His exhibit at the House of Sweden — which is where the small Icelandic Embassy resides — is inspired by his new book “Glacier,” an ode to the awe-inspiring glacial forms that give shape and life to the Arctic.

“The title ‘Glacier’ makes people think they’re going to look at photos of typical Icelandic glaciers,” said Una Særún Jóhannsdóttir, the culture and public diplomacy counselor at the Icelandic Embassy. “They’re actually taken from above and are spectacular photographs — surprisingly artistic. I think people will be pleasantly surprised.”

Indeed, at first glance, some of the images are nearly unrecognizable. The black-and-white photos present abstract, mesmerizing patterns, lines and textures that could be interpreted as microscopic views of fibers or human cells.

Instead, they are breathtaking aerial vistas of the magnificent glaciers that have carved out the Arctic’s rugged landscape over the centuries. But these monumental chunks of dense ice pack are not frozen in time. They are constantly on the move — and melting at an alarming rate thanks to climate change, one of the main issues facing the Arctic Council. 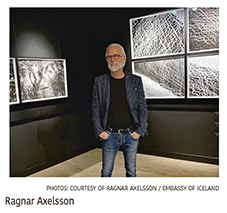 The exhibit marks Iceland’s upcoming chairmanship of the Arctic Council, an intergovernmental forum founded in 1996 that promotes cooperation among the eight countries that border the Arctic region and the indigenous people who live there.

The chairmanship rotates every two years. The first chair was Canada, followed by the U.S. The last country to chair the council was Finland. The Arctic Council has no formal budget. Rather, projects and initiatives are sponsored by Arctic states and generally focus on scientific collaboration and environmental issues. Recently, however, the Trump administration has sought to inject a security dimension to the council by warning about the geostrategic competition posed by Russia and China as melting ice creates new economic opportunities in the region (also see cover profile).

Jóhannsdóttir said the glaciers are rapidly retreating because of climate change, warming at twice the rate as the rest of the planet. This in turn exacerbates climate change around the world, fueling punishing heat waves, floods and other unstable weather patterns. Within a few decades, some of the glaciers, if not all, will completely disappear.

“It’s probably too late to do anything about the melting of the glaciers themselves, so it is important for us to document and show their spectacular nature,” she said.

A few of Jóhannsdóttir’s favorite images in the exhibit include a photo taken inside an ice cave that gives the appearance of a human face hidden in the ice. Another is a compilation of photographs showing the water flowing from melting ice. “It’s really extraordinary to see them all together,” Jóhannsdóttir said.

It’s an extraordinary natural wonder to behold — while we still can.

June 15 to 23
throughout Washington, D.C.
www.bythepeople.org