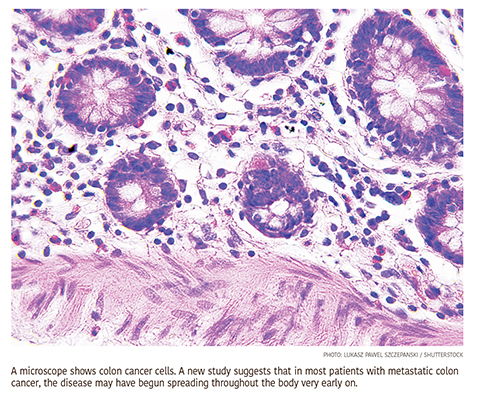 In most patients with metastatic colon cancer, the disease may have begun spreading throughout the body very early on — when the original tumor was no bigger than a poppy seed, a new study suggests.

Metastatic refers to the most advanced stage of cancer, when the original tumor has spread to distant sites in the body.

Traditionally, that’s been seen as a “late” event — the result of a cancer accumulating many mutations that allow it to invade various tissues in the body, said Christina Curtis, lead researcher on the new study.

Her team’s findings turn that viewpoint on its head.

Through genetic analysis of tumor samples, researchers traced the origins of metastases in 21 patients with advanced colon cancer. They found that for 80 percent, those metastases likely occurred very early — before the cancer was even diagnosed.

Essentially, that means some cancers are “born to be bad,” said Curtis, an assistant professor of medicine and genetics at Stanford University in California.

While that might sound demoralizing, she said the results can actually be viewed in a positive light.

One day, Curtis explained, doctors might be able to use tumors’ genetic characteristics to figure out which patients with early-stage colon cancer need more aggressive treatment.

That could mean, for example, treating patients with chemotherapy after surgeons have removed the colon tumor in an effort to wipe out tumor cells that have traveled to other sites in the body.

Plus, Curtis said, discovering which genetic “drivers” cause cancer to spread early could allow researchers to develop new drugs that target those mechanisms.

According to Dr. Martin Weiser, a colon cancer specialist at Memorial Sloan Kettering Cancer Center in New York City, “These findings are very important. This is top-notch work.”

Many researchers and doctors have suspected metastases often get their start early on, he noted, but this is actual proof from patient tumor samples.

“This is showing there are molecular changes that happen early,” Weiser said. That early occurrence, he added, should make it easier to pinpoint the particular genetic culprits.

“Maybe we can figure out which patients need additional treatment early on, and which ones don’t,” Weiser said.

For the study, published June 17 in Nature Genetics, Curtis and her colleagues started with tumor samples from 21 patients with colon cancer that had spread to the liver or the brain.

Next, researchers combed through data on more than 900 patients with metastatic colon cancer, and 1,800 whose cancer had not spread. All had had their original tumor analyzed to detect changes in genes known to be linked to cancer.

The researchers found that certain combinations of gene mutations were strongly related to the odds of metastases.

“It wasn’t any single mutation, but specific combinations of mutations, that seemed to tip the balance,” Curtis said.

For example, mutations in a gene called PTPRT, in combination with certain other mutations, were found almost exclusively in patients with metastatic cancer. Past research has shown that when PTPRT’s function is lost, a “cell survival” protein called STAT3 becomes more active.

Curtis said it’s possible that a drug that would inhibit STAT3 could prevent metastases.

More research is needed to better understand what genetic drivers cause early metastases — and why some cancer patients never develop metastases, Curtis said.

The study authors are also looking at whether this same phenomenon is true of other types of cancer.

Curtis stressed that the findings do not diminish the importance of colon cancer screening to catch the disease early. Treating the disease in its early stages is always critical.

Weiser made another point: Patients newly diagnosed with colon cancer often feel they have to rush into treatment, thinking the risk of it spreading rises with each day. But if that risk has more to do with tumor genetics than with time, patients may feel less pressure to make an immediate decision.

“You can take the time to consider the options and make sure you get the right treatment,” Weiser said.

The American Cancer Society has more information on treating colon cancer at www.cancer.org/cancer/colon-rectal-cancer/treating.html.