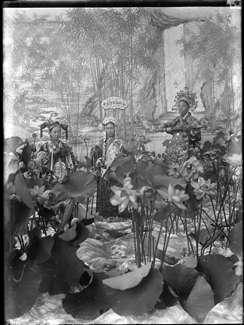 Early 20th-century photographs of China’s Empress Dowager Cixi, including her in the guise of Avalokiteśvara, the Buddhist bodhisattva of compassion, above, were intended to shine a positive light on the woman immortalized as a narcissistic “dragon lady.”

Giving someone a picture of yourself — and in an ornate frame to boot — might seem gauche today, but at the turn of the 20th century, heads of state used such gifts as acts of diplomacy. For instance, when China’s Dowager Cixi sought to make her soured image after the Boxer Rebellion of 1900 more positive, she made negatives.

The 19 life-size photographic portraits in “Power | Play: China’s Empress Dowager,” now on display at the Arthur M. Sackler Gallery, are taken from 36 original glass-plate negatives, the only surviving pictures outside China of the woman who rose from imperial concubine to reigning sovereign of 400 million people for more than 45 years. Immortalized as a narcissistic “dragon lady,” Cixi (1835-1908) takes on a new legacy through these black-and-white photos, and historians’ study of them, all of which reveals a theater-loving woman who celebrated her femininity and combined early forms of photography — and public relations — with traditional imperial portraiture to assert her place on the world stage.

David Hogge, exhibition curator and head of the Freer and Sackler Archives, divided the images into four galleries according to their presumed intended audience: the subjects of the Qing dynasty (1644-1911), international figures, close friends and theater goers. The photographer, Xunling, an amateur but a relative of two of her attendants, took the pictures in 1903 and 1904.

The most interesting photos hang in the second gallery, dedicated to diplomacy. They are interesting not for their artistry but for their history. After the Boxer Rebellion, in which peasants rose up against Christians and foreigners, including foreign legations, Cixi’s reputation foundered; many assumed she supported the movement. To ensure her power, she sought to make amends with the affected foreign community, but the male ambassadors wanted nothing of it. So she appealed to their wives, inviting them to lavish luncheons and gifting them with jades and other goods. The first such meeting is recorded in a 1902 image of the wives outside the American Embassy.

“It is historically, I think, an extraordinary image,” Hogge said. “Photography was used both to record her attempts to reach out to the foreign community and as gifts.”

The effort worked. She especially impressed Sarah Conger, wife of American Ambassador Edwin Hurd Conger, who wrote favorably about the empress, helping to curry favor for her. A photo in which Conger and Cixi hold hands is extraordinary, Hogge said, because heretofore Cixi had been completely off-limits to foreigners, let alone showing affection toward one. 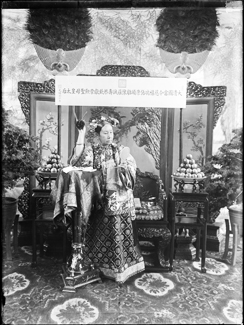 American friendliness was crucial to Cixi. She needed the United States to forgive China’s debts following the costly uprising. To warm up to President Theodore Roosevelt in 1904, she sent a photograph of herself that resembles those of the throne series in the first gallery but is greatly enlarged and cropped to exclude much of the lavishness in the other photos. Painters then retouched the image, and hints of glittering gold and greens remain, as does the original silk brocade matting.

“She’s been dramatically cropped to give a greater sense of intimacy and perhaps a sense of immediacy,” Hogge explained. “Also, this is the only photograph where she is looking straight at you, perfect for that kind of relationship that she’s trying to develop with another head of state.”

The show opens with carefully staged photos of Cixi on the throne in luxurious robes and surrounded by well-appointed furnishings as a means of asserting her authority, although her poses put that into question. In one, she informally leans on an elbow and crosses her legs. Also, her choice of global goods — a French pedestal table, Western apples and Indian paisley — are atypical of her traditional iconography.

“I think she’s really trying to show at this point, when she’s being attacked both internationally and domestically … not only her authority to the Chinese but also her ability to operate as a head of state on an international basis — basically showing she’s cosmopolitan,” Hogge said.

Also notable in this series is the absence of dragon robes, worn to signify rank and authority. She dons one in only one picture, choosing instead bold patterns of chrysanthemums and symbols.

“Why would she have tried so hard to create a sense of legitimacy and authority but she’s not showing her dragon robe?” Hogge asked. “My sense is that because a woman’s dragon robe was pretty much dictated by the rank of her father or her husband — basically, the ranking male in the family — as a female ruler, she wanted to reject any kind of indication that her own authority was dictated by her relationship to male members of the family.”

The image that sticks in popular memory is one of Cixi looking at herself in a mirror as she puts a flower in her hair, a pose she strikes again in another photo in which she is flanked by attendants outside one of the Summer Palace’s main gates. Assumed to show vanity, the pose is actually identical to one in a popular play at the time, making it not egotistical but her compliment to the show.

The Smithsonian acquired the images in 1944, and Hogge began researching them four years ago. He hopes the exhibit debunks some myths about Cixi, as she herself sought to shrewdly rehabilitate her image in the waning days of a dynasty, much as politicians still do today. “The amount it tells us about rich and visual traditional culture is really extraordinary,” he said.