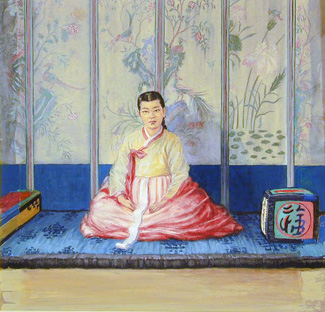 Elizabeth Keith’s “Gentle in Ceremonial Dress” is among 125 works that capture four Western women’s impressions of life in the East in “Visions of the Orient: Western Women Artists in Asia 1900-1940.”

American feminist interpretation of Eastern mystique comes alive in the latest exhibit at the National Museum of Women in the Arts, “Visions of the Orient: Western Women Artists in Asia 1900-1940.”

The 125-piece exhibit, organized by the Pacific Asia Museum with the Jordan Schnitzer Museum of Arts, introduces us to four captivating female artists: Helen Hyde, Bertha Lum, Elizabeth Keith and Lilian Miller. They all trained as painters but also designed woodblock prints while living in Japan, where they were clearly enchanted with their Asian muse.

That enchantment surfaces in dozens of visually striking woodblock prints that not only capture the beauty and allure of “the Orient,” but also challenge “pessimistic assumptions about Orientalism and gendered Orientalism developed by scholars over the past 20 years,” according to the museum, which notes that Asia served as a liberating professional space for these four women, as well as a source of artistic inspiration.

Westerners began flocking to Japan and the rest of Asia in the mid 19th century, but these four artists truly immersed themselves in the region’s folklore, landscape, customs and history. In the process, these women, who worked with Japanese teachers and colleagues, stood out among the many other Americans who left a largely paternalistic footprint on the region, which openly flared into hostility by the 1930s. 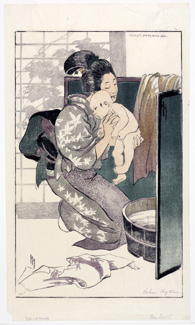 The resulting intersection of American art, East Asia, and the woodblock print movement plays out whimsically as visitors weave in and out of different suites exploring each artist. Hyde (1868-1919) was the first of the four women to have set up residence in Japan by 1900. She pays homage to the country in her stylized, tranquil prints that exude serenity as she depicts her favorite subjects, women and children. In “Baby Talk,” viewers share an intimate moment between a mother and her infant, with Asian motifs and dress adorning the scene.

One unique, insightful feature of the exhibit is that the object descriptions contain the artists’ personal thoughts along with contemporary writings about their work, bringing viewers closer not only to their art, but to the women’s experiences abroad, their career struggles and the love they had for their craft. “Japan was a gem, a revelation, a new world with art possibilities beyond one’s dreams and coming into Japanese life, I was overjoyed by the infinite opportunities offered in color and the charming quaintness of the environment,” said Hyde in one of her letters.

“These women were intrepid. They were outsiders and did not have to live by certain scriptures that American and native women had to live by,” explained Jordana Pomeroy, chief curator at the National Museum of Women in the Arts. “One of the most remarkable things about the show is the mentality of independence. For them, Asia offered a more liberated type of life.”

For Lum (1869-1954), her aesthetic interpreted a more surreal, folkloric Japan and China brought to life from literary works. In her “Spinning Goddess,” Lum’s subject is inspired by the legend recounted by author Lafcadio Hearn of a spinning goddess who brings silk cultivation to China. In “Mother West Wind,” divinity and nature interplay in swirls of green and blue. “And when the sun goes down, Mother West Wind calls the Merry Little Breezes together and puts them to bed beyond the Purple Hills,” Lum said of the woodblock print. 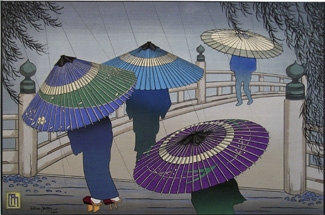 The Asia depicted by Miller (1895-1942) centers on mystery and romance. Born in Tokyo — the only one of the four women to have been born in Asia because of her diplomatic family — Miller brings a softness and familiarity to her work, perhaps infused from her childhood. Her “Rain Blossoms” print draws viewers in with its colorful, engaging paper umbrellas and their mesmerizing swirling patterns that obscure their owner’s faces.

Keith (1887-1956) focused more on Asian customs and traditions in works such as “Old Peking: Temple Gate with Camel,” where there’s an overarching delicateness that travels seamlessly from the temple gates, to the clothing worn by the bystanders, to the architecture that welcomes viewers to Keith’s Far East dreamland. The same picturesque treatment can be seen in “Gion Festival,” inspired by her trips to Kyoto and Osaka where she saw the festivities firsthand. In her watercolor painting, the warm yellow-glowing lanterns that stream downtown Kyoto during the important annual festival contrast with the deep blue night sky as onlookers admire the radiance.

Each artist embraced a land foreign to most Western eyes, setting them apart as pioneers whose work still resonates today. They explored a part of the world that, despite ingrained notions about the Orient subjugating women to inferior roles, gave them the freedom to pursue their art while also serving as a bridge between East and West. Perhaps the words of exhibit curator Kendall H. Brown sum it up best: “Whether we see these artists as quiet rebels against patriarchy, or as seductive agents of colonialism, their visions of the Orient comprise a compelling chapter in the making of trans-Pacific culture.”

Fresia Cadavid is a contributing writer for The Washington Diplomat.