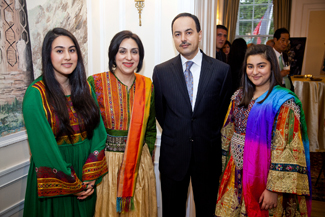 Almost every day in Washington, she can open the newspaper or turn on the TV and hear about her country. Sultana Hakimi is the wife of Afghan Ambassador Eklil Hakimi, most recently Afghanistan’s deputy foreign minister for political foreign affairs. Before moving here, the Hakimi family lived in both Japan and China while the ambassador filled Kabul’s top posts in those two nations.

“Americans are interested and sympathetic to our country, our people,” Sultana Hakimi told The Washington Diplomat. “And curious. They sometimes ask if I ever wear a scarf over my head.”

The answer: “Yes, it depends. I do respect our Afghan culture and wear a scarf for national holiday celebrations here and usually in Afghanistan when I’m not inside my own home or a home of my family or close friends,” said this Muslim mother of three who joined her husband here with their daughters in April.

“So many people have been so helpful to our country. When they hear what life was like under the Taliban, especially for women and girls, they sometimes even cry.”

Sultana Hakimi and her husband, Afghan Ambassador Eklil Hakimi, center, pose with two of their daughters, Sameena, 16, a senior at Georgetown Visitation Preparatory School, and 12-year-old Sabiha, who attends Edmund Burke Elementary (their third daughter, Zahra, is 18 months). The Hakimis met while studying for their master’s degrees in engineering in Kabul.

The brutal conditions Afghan women did and continue to endure helps drive Sultana’s focus here in Washington. “With whatever free time that I have, I want to help the women and children at home, especially to empower the women. Afghan women make up 50 percent of our population and they have so much to offer to our country and their families.”

Sultana, 42, is a shining example of women’s empowerment herself. She holds a master’s degree in engineering and has worked as a banker and an accountant. To that end, she believes that education is the most important ingredient in restoring her country to the heights of its 5,000-year history before the Soviets and the Taliban held it hostage in recent decades. “The children are our future.”

For now, the couple’s own three girls keep this diplomatic wife busy. Sameena, 16, is a senior at Georgetown Visitation Preparatory School, 12-year-old Sabiha attends Edmund Burke Elementary, and Zahra, only 18 months, is fast becoming a toddler.

“I am lucky to have some help,” explained Sultana. “My mother came over with me and the girls and stayed to help us get settled in. I also have Danny, a wonderful woman of Chinese descent who is great with the girls and is a fabulous cook too.”

Sultana also loves to cook and spend time with her family. “Time with our children is my best time. My favorite room is the kitchen. I love it when we are all home together; everything is so peaceful then.”

Interestingly, to relax, Sultana turns to ping-pong. “I even have my own paddle. In fact, I have two, one for my partner,” who is often her husband, also an accomplished player.

Sultana described her own childhood as “perfect” — but only through the sixth grade, after which Afghanistan’s descent into war began.

“My mother was a teacher of science and algebra at Malalai High School, the famous high school I also attended. My father, who had earned his doctorate in Germany, was a college professor in political science,” Sultana said.

“After that, even though it was still OK to live in Kabul at first, life out in the provinces became dangerous because of the civil war. Then the Russians came, and after that in 1996, the Taliban” with their fundamental extremism. “For 30 years, Afghanistan’s people, way of life and grand old culture were under attack.”

During the height of the Taliban’s reign from 1996 to 2001, Afghan women virtually disappeared behind society’s closed doors. Female judges, doctors, teachers and shopkeepers were all sent home. Women and girls could no longer go to school or work. Death by stoning, among other atrocities, was the fate that awaited those who dared to defy the Taliban’s rigid rules.

For Sultana, by 1992, daily life in Afghanistan had already become “unbearable.” As young, college-educated newlyweds, the Hakimis decided to leave Afghanistan and accept his parent’s invitation to join his family in Orange County, California. She and her husband had met while getting their master’s degrees in engineering at the Polytechnic University of Kabul and by that point he had already joined the Foreign Service.

“It had become very scary; I couldn’t go out,” Sultana recalled. “The men had to go out and bring home the food. We had no electricity, no school and we, as women, couldn’t work. Even though we had more rooms in our home, we huddled together in one room — we couldn’t relax or read because of the rockets. We didn’t know what would happen next. We worried every time a man in the family went out whether he would come back.

“One day, the opposition forces ceased fire for the diplomats to leave. We decided this was our chance,” she continued. “We only had one-day notice. I had to go and say goodbye to my parents and my brothers. That was hard. We left by car for Peshawar, [Pakistan], a three-hour drive away. We each packed only a small suitcase because there were six of us in the car. We just closed the house and left everything there.”

Luckily, their home — with all its belongings and only a few broken windows and minor damage — was waiting for them when they returned more than a decade later.

From Pakistan, they flew to California to join his parents and siblings.

“From the time we left, for the next six months, we had no fax, no phone calls, no email, no mail from my family,” she remembered. “We knew nothing. And I was especially worried about one of my brothers and his family. At that time, he lived in an insecure region with his wife and little daughter. They lived in a basement and didn’t have enough formula for their baby.”

Once stateside, these two young engineers quickly found work — she as a banker and then as an accountant in a law firm and he as an engineer with Liebert, a branch of the well-known American engineering firm Emerson. They also both went back to school at Saddleback College and he went to the California State University at Long Beach to enrich his foreign engineering credentials.

In the meantime, a new Afghanistan was becoming a reality. “President [Hamid] Karzai sent out a message to all Afghan ex-pats around the world to come home and be part of the new Afghanistan,” the ambassador told me as his wife left for carpool duty and he had a break in his nonstop day.

“From the day I knew my left from my right, I was taught by my family that you educate yourself and then you serve your country. It was in my subconscious. I always knew I would return if I had the chance,” he said. “During the Taliban, we were hopeless. Then, we had a new hope when the new government was formed. Many of us returned home to help.”

But first, he got the family together and asked his wife and his then two children for their vote. “My wife already understood; she saw the opportunity.”

“I explained to my oldest — then only 8 years old — that I had decided to go but that I needed her support too. I told her that I wanted her to stay at home where she could go to school and eat the good food in the refrigerator. I told her I was going to help girls and boys in Afghanistan who had no school, no food and no hope for the future,” the ambassador explained.

“America understood quite well the threat of the Taliban,” he continued. “Today, we Afghans are grateful for support from the American taxpayer. This support will be remembered and stay with Afghans forever. It is part of our culture and traditions that once you receive a favor from someone, you are from then on looking for an opportunity to pay that back.”