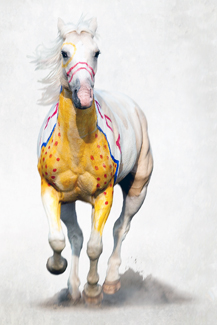 Some relationships seem like they have always existed. The one between Native American Indians and horses is among those. But as visitors to the National Museum of the American Indian’s newest exhibition, “A Song for the Horse Nation,” will discover, that relationship is only about as old as European contact with native tribes.

Despite the animal’s origins in the Americas about 40 million years ago, horses had become extinct here because of migrations to Europe and Asia. It wasn’t until Christopher Columbus’ second voyage to the Americas in 1493, when he left behind a herd of 25 horses, that the animals returned for good.

Not only did horses reappear, they would forever redefine life for American Indians. For a long time though, horses were a symbol of the power held by European explorers over native peoples, who had never before seen the animals. They wouldn’t fully claim them as their own until the Pueblo Revolt of 1680, when the Spanish fled from what is now New Mexico, leaving about 1,500 horses behind. Within 20 years, nearly every native tribe was mounted.

From that point on, horses galloped their way into tribal culture, revolutionizing the way American Indians lived, notably on the Great Plains. They made hunting easier, battle more efficient, travel faster and traditions richer. Before long, a deep connection between human and animal had been forged that would never be broken, despite many attempts by settlers to sever it.

“A Song for the Horse Nation” illustrates this complex relationship through a mixture of 122 photographs, artifacts and interactive displays that touch on the animal’s wide-ranging imprint on native life, from the spiritual to the economic to the artistic. 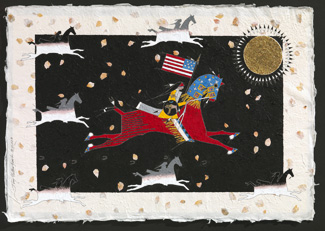 A horse mask by Jim Yellowhawk of the Lakota tribe.

“When American Indians encountered horses — which some tribes call the Horse Nation — they found an ally, inspiring and useful in times of peace, and intrepid in times of war,” said Kevin Gover, director of the museum. “The exhibition shows how these majestic creatures came to represent courage and freedom to many tribes across North America.”

The focal point of the exhibit is a Lakota tipi, created between 1890 and 1910 in South Dakota. The red-bordered structure is colorfully decorated from top to bottom with 110 hand-painted scenes of the Lakota Indians riding and entering battle with their horses. Visitors are able to walk around the entire perimeter of the 16-foot-tall, 38-foot-circumference tipi and take in the full story depicted on its exterior.

Many other items, such as a sheet of cloth called a Winter Count, depict the history of a tribe’s relationship with its horses, while interactive displays help to provide context for the objects, with easy-to-understand touch-screens that appeal to kids, too.

One interactive display features recordings of native words for “horse” and their English translations, including “big dog” in Cree and Assiniboine, “holy dog” in Lakota and “elk dog” in Siksika — a reflection of what a challenge it must have been for American Indians to name an animal they’d never set eyes on before. 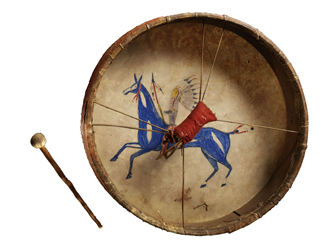 A painted drum dating to the 1860s from the Lakota tribe.

The stories behind the exhibit reveal fascinating aspects about Native American culture and beliefs. Visitors for example, can learn about how a warrior would gallop astride an enemy and touch him with his hand, or that raiding an enemy’s horses was considered a proud tradition that survived even into 20th-century warfare. In fact, during World War II, Joseph Medicine Crow, an Apsáalooke Indian now in his 90s, liberated horses from the Nazi SS, receiving the Presidential Medal of Freedom award in 2009.

Many of the artifacts on display are decorative items worn by the horses themselves, both functional and ceremonial. Saddles, bridles, bags and other accoutrements all show how horses played a vital role in everyday Indian life. Some of the most fascinating are masks made for the horses to wear as ceremonial regalia or into battle to make them appear more intimidating. Among these is a mask made by the Lakota to resemble a buffalo, another revered animal to many tribes. Covered in buffalo hide and decorated with buffalo horns and accented with feathers and beading, it’s as if the horse wearing it could blend right in with a buffalo herd. 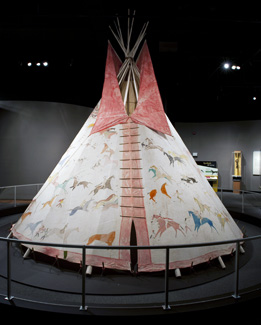 “A Song for Horse Nation” features more than 120 items that illustrate the important role horses play in Native American society, as seen in the tipi from the Lakota tribe.

Some items are for human use, but still reflect the deep reverence people held for their horses. Clothing, tools, pipes and children’s toys often depict horses or equine scenes. A famous 1890 ceremonial dance stick of No Two Horns was created by Lakota Chief Rain-in-the-Face to honor his beloved horse that died at the Battle of Little Big Horn. This wide variety of items attests to the importance of horses to American Indians, both past and present.

Today, many American Indian tribes still breed and care for horses, as demonstrated in the last section of the exhibit. Intricate horse regalia is still created for ceremonial and artistic purposes, such as the full ensemble recently created by the Apsáalooke, or Crow peoples, displayed on a life-size horse model. That same tribe and their horses participated in President Obama’s inauguration parade.

Though they may not serve the same hunting and other critical roles they did years ago, horses remain an enduring facet of Indian society and culture. “For some Native peoples, the horse still is an essential part of daily life,” said Emil Her Many Horses, curator of the exhibition. “For others, the horse will always remain an element of our identity and our history.”

A Song for the Horse Nation

Kaitlin Kovach is a freelance writer in Washington, D.C.