Home The Washington Diplomat May 2011 In Japan, Sun Will Rise Again, But Disaster Shines Light on Stagnation 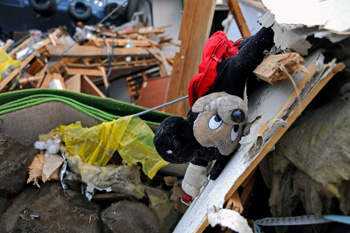 TOKYO — In Japan, memorial services for the dead are normally held 49 days after their passing. The bereaved mourn throughout this period. The number of victims of the earthquake and tsunami that assaulted the Tohoku region of northeast Japan has now reached around 30,000, if those who are still missing are included. This was the largest natural disaster to strike Japan in its history, and the entire nation has been in mourning.

A Mickey Mouse toy lies among debris and rubble that blankets the town of Ofunato in Japan, four days after a magnitude 9.0 earthquake and tsunami struck the country. As heartrending as the tragedy is, the government must now focus not only on reconstruction, but on building a bold new model for regional development that can decentralize Japan’s sluggish Tokyo-centric economy.

Throughout this period, television stations, in response to viewers’ feelings, have refrained from showing frivolous programs and gaudy commercials. Many of the hanami events, for celebrating the annual eruption of cherry blossoms, a much-loved activity for us Japanese, have been canceled. Music and sporting events, along with town gatherings, have also been canceled or postponed. Bizarrely, the American rock singer Cyndi Lauper’s concerts were just about the only events that weren’t called off.

The strong bonds (kizuna) of the Japanese people create great solidarity during dark times such as these. One virtue of kizuna can be seen in people’s inability to enjoy themselves in their usual ways in the face of the loss of so many countrymen and the knowledge that 200,000 more are enduring harsh conditions in evacuation centers.

But there are concerns that these bonds of kizuna may also bind the Japanese economy, which must recover as soon as possible — not only for the benefit of the Japanese, but also because disruptions in Japan’s economy are hitting the rest of Asia, owing to the production chains of which Japan is an integral part.

But today’s strong kizuna and mentality of mourning have led to sharply diminished consumption. The tourism industry has been directly hit by people refraining from travel, and the abundant hot springs in the Tohoku region, normally popular with tourists and totally unaffected by the earthquake or tsunami, have become a victim of the disaster. Similarly, the baseless rumor that all of Japan is soaked in radiation has caused tourism from abroad to plummet.

Meetings and parties in Tokyo have been canceled, and this has directly affected not only hotels and inns, but also the liquor industry and the food and beverage industry. The restaurant industry, too, is being pushed to the wall. It is now no problem to get reservations at restaurants with three Michelin stars. Despite the great efforts made to manage refrigeration amid blackouts caused by power shortages, customers are not turning out.

Likewise, customers who formed lines to buy up water and toilet paper immediately after the disaster are now slow to return to supermarkets. And this tendency to shun all purchases except disaster-related goods is not limited to east Japan. It is a nationwide trend.

This curtailed consumption, however, comes at a time when Japan’s economy is already weak. Indeed, the Japanese economy, which has endured two decades of sluggishness, has been falling behind in the global economy even more since the shockwaves caused by Lehman Brothers’ collapse in 2008. Now it has been struck by a combination of prolonged deflation and the shocks caused by the recent natural disasters.

The end of April will mark 49 days since the earthquake and tsunami hit on March 11. The profound disruption of the economy will continue at least until that time. It took a year for consumption to recover after the Kobe earthquake in 1995, but the widespread damage did create widespread demand back then, and should do so again.

But Japan’s government needs to think big and creatively. If towns suffering from depopulation before they were destroyed are transformed in their reconstruction, they could mark the emergence of a new model for regional development that can decentralize Japan’s Tokyo-centric economy.

Farmland that had been worked by an aging population with no successors, and that was subdivided into blocs that were too small, has now become vacant, opening the way for much larger-scale farming. Similarly, individually operated fishing businesses whose potential heirs ended up choosing other careers can now be reorganized and consolidated, thereby taking advantage of greater economies of scale.

Perhaps most importantly, the nuclear accident has shed a stark light on the need for safe, renewable energy, which had been shunned in the past. The current government has plans to generate power using large-scale solar and wind power plants in the disaster-affected areas.

But Japan’s economy has for too long been stuck in a ditch as a result of its being bound by over-regulation and a rigid adherence to precedent. So, if there is a ray of light to come from the horrors suffered by the people of the Tohoku region, it is that the Japanese understand that what they need most of all nowadays is clear leadership with a coherent and bold plan for rebuilding and renewing their country.

Indeed, the only way truly to honor those who lost their lives is to create a new model Japan from the tsunami’s wreckage, rather than simply restoring towns and their economies to their previous decadent conditions.